THREE men died and three others were injured in a knife rampage at a park in Reading.

Police have confirmed the incident is being treated as a terror attack as the suspect was named as Khairi Saadallah.

Who is the Reading terror suspect?

The Reading terror suspect was first named as Khairi Saadallah in a report by the Telegraph.

He is reportedly a 25-year-old Libyan who came to Britain as an asylum seeker.

Sources reportedly claimed Saadallah was known to officers, and had previously spent at least 12 months in jail for minor offences.

The BBC reported these were not linked to terrorism, and Sky News reported they were “violence related”.

Usually asylum seekers convicted in the UK would be deported, but the suspect reportedly remained here due to conflict in Libya. 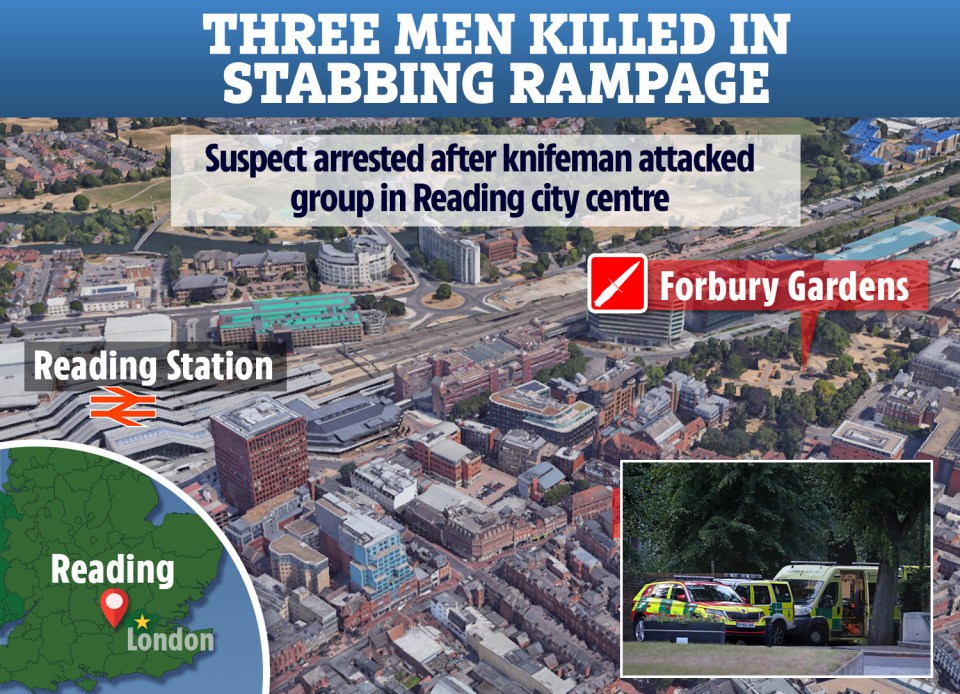 The Libyan Civil War has been raging since 2014, and followed a previous eight-month conflict which raged in 2011.

Police in Reading initially said the June 20 rampage was not being treated as a terror attack.

However, it was confirmed the following morning that Counter Terrorism Policing South East have taken over the probe.

Security sources have said mental health is also being considered as a major factor in the attack.

The head of counter terrorism policing, Metropolitan Police Assistant Commissioner Neil Basu said police are were not seeking anyone else as part of the investigation.

Forensic tents at the scene of the stabbing Reading[/caption]

What happened in the attack?

Multiple people were stabbed around 7pm after the knifeman approached a group of middle aged men “sitting drinking beer“.

It is thought the group may have picked up takeaway beers from a nearby pub just moments before the attack in Forbury Gardens.

Distressing video showed people covered in blood and not moving as they lay on the ground.

The suspect was reportedly “rugby-tackled” by a hero cop and arrested on suspicion of murder.

Cops confirmed the morning after the attack that three people had died, and three others were injured.

Speaking on June 21, Prime Minister Boris Johnson said: “I am appalled and sickened that people should lose their lives in this way and our thoughts are very much with the families and friends of the victims today.

“I have obviously talked to the Chief Constable of Thames Valley police, thanked him and his officers for their bravery in tackling the suspect.

“We now have someone in custody, the police must get on with their job, get on with getting to the bottom of exactly what happened so it will be difficult to comment in detail.

“Except to say this – if there are lessons we need to learn about how we handle such cases, how we handle the events leading up to such cases, then we will learn those lessons, and we will not hesitate to take action where necessary.”


Quarantine-free hols to 10 hotspots including Spain, Greece & AUSTRALIA in days

One eyewitness, who was around 10 metres from the scene, said the attack looked “completely random”.

Lawrence Wort, 20, a personal trainer from Chippenham, said: “A lot of people sat around drinking with friends when one lone person walked through, suddenly shouted some unintelligible words and went around a large group of around 10, trying to stab them.

“When he realised that he couldn’t catch us, he tried to stab another group sat down, he got one person in the back of the neck and then when he realised everyone was starting to run, he ran out the park.”

Elijah Cummings' widow says Rubio made 'honest mistake' in mixing up her husband and...

Seven in 10 American parents are radically changing their approach to...