WE’RE finally going back to the pub on July 4 when our boozers get to open their doors again.

Now that scientists have allowed us to reduce the two metre rule we’re finally allowed to get a crisp, full-bodied pint with our pals again.

When will pubs reopen in the UK?

The PM has said that we’re good to go on reopening pubs on July 4 now that scientists have said it’s ok to reduce the two-metre social distancing rule.

Brits desperately missing catching up with pals at the pub could soon be back at the bar or ordering through an app to keep safe.

The decision has been a huge political pressure point between ministers and businesses urging Boris to speed up the return to normal life and scientists warning him to slow down.

Pub bosses had lobbied for a confirmed reopening date amid worries beer deliveries wouldn’t arrive on time and staff needed at least three weeks to be trained up on new social distancing measures.

However now that Matt Hancock revealed the UK’s death rate is back to normal for the first time since lockdown began, we’re finally getting to a safer place.

Scientists have said they are “totally comfortable with” the two-metre social distancing rule being reduced – but only if people sit side by side and wear face coverings as much as possible.

There is now hope that the move will help save the 3.5 million jobs at risk

Business Secretary Alok Sharma previously said: “As soon as we can, we will publish further guidance for restaurants, pubs and bars as well as hairdressers, barbers, nail bars and related services.

“We continue to follow the roadmap which sets out our ambition to reopen these sectors from 4 July at the earliest.”

The Government has been under increasing pressure to relax the two metre social distancing rule amid worry the hospitality sector will struggle to recover from the economic crash by allowing just a few people in at a time.

Lots of pubs and restaurants have also said they cannot maintain the two metre social distancing rule inside their establishments, meaning a number would have to remain closed.

Pubs have been shut since March[/caption]

Some pubs have been allowed to partially reopen this month using outdoor market-style stalls.

Government officials have previously suggested it could take many months for pubs to reopen – sparking fears for the future of many of the UK’s 48,349 locals.

Top scientists have predicted that the hospitality could start to pick up without triggering a second wave.

When will Wetherspoons be reopening?

The famous pub chain Wetherspoons shut all their doors on March 20, but have since revealed their plan to reopen over 875 pubs across the UK.

Wetherspoons has said they are investing £11million into this new plan to make sure the new measures keep both their staff and customers safe.

Each pub will be temperature checking all their staff before they start their shift, as well as providing them with gloves, masks and protective eyewear for them to wear when working.

They have also suggested they will be limiting their menu slightly, as well as replacing all the usual condiments with sachets rather than plastic bottles and create one-way systems in and out of the venues.

The Sun was given a first glimpse of the new layout as it was revealed there will be screens, posters and floor markings.

There will be separate exits and entrances, and tables will not positioned to abide by social distancing rules.

How would social distancing work in pubs?

The plans have also revealed that social distancing measures will be in place for when pubs do eventually open.

These measures would require drinkers to order their booze remotely via an app, with the punter then having to collect their drinks from the bar to minimise contact between staff and customers.

Tables will also be placed two metres apart and screens will be erected at bars to protect staff for bills.
Limits on customers will also be in place, with people only let in if there is a seat for them.

Pubs must have ventilation systems to stop coronavirus building up, while the two metre rule will stay.

British pub operators have asked for social distancing rules to be halved from two metres to one, worried that many will have to close permanently otherwise, the Financial Times reported.

The report cited Simon Emeny, chief executive of pub group Fuller’s, as saying that the rules in the country currently went “above and beyond” the World Health Organisation guidelines.

“I think it’s really important that (the rules) are relaxed by the time pubs reopen,” Emeny was quoted as saying.

The FT also added that Jonathan Neame, the head of pub operator Shepherd Neame, said attempting to keep people two metres away would be “profoundly challenging” and many pubs would have to remain closed. 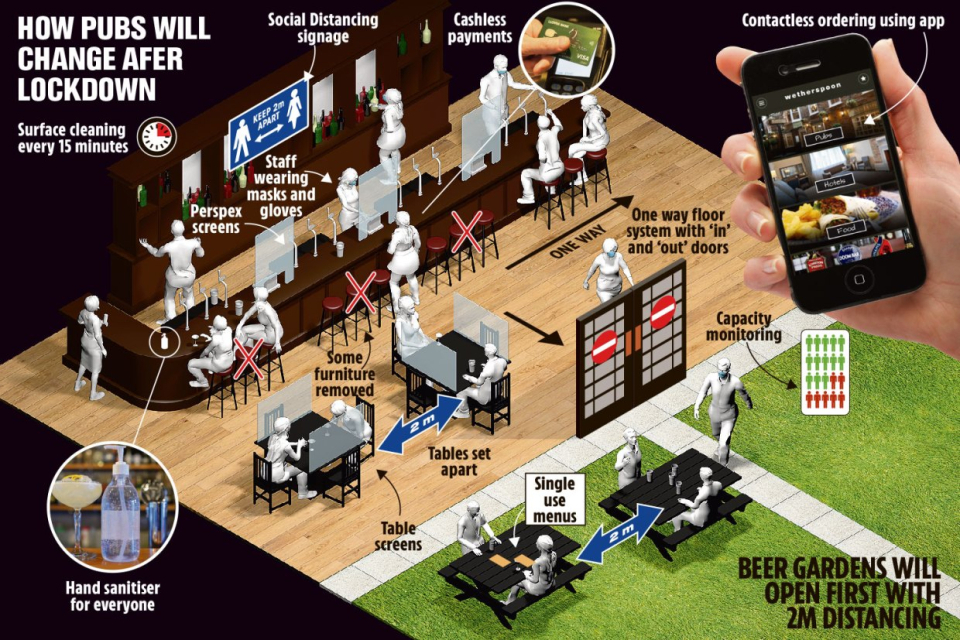 What about beer gardens and outdoor seating areas?

Those pubs which have outdoor beers gardens, where it has been shown that coronavirus is far less likely, will probably be given the green light first.

Some pubs were allowed to reopen last week with outdoor market-style stalls.

Early in May, Professor Robert Dingwall, a top Government adviser, said pub beer gardens should reopen as long as punters can stay apart.

He told BBC Radio 4’s Today programme: “If it is a sunny weekend afternoon and the pub has a garden and the landlords are prepared to accept responsibility for not overcrowding that garden, I see no particular reason why it should not reopen.”

Those already with allocated outdoor seating are due to be given guidance on how they might be able to reopen from June 1.

And plans are being considered to offer “blanket permission” to businesses wanting to add outdoor seating for customers.

It is hoped the outdoor openings will allow venues to get people back to work.

Shops may also be able to set up stalls outdoors so they can sell their wares on the streets.

How has the hospitality industry been affected?

As well as missing the Euros this year, that bring in millions for locals, a closure over Christmas could sink a huge number of Britain’s locals.

Frank Maguire from Truman’s brewery, which has traded in London since 1666, said: “Things are looking pretty dire.

“At this rate it seems unlikely that pubs will be open again before Christmas.

“Small independent breweries are part of this country’s DNA, but a lot of them won’t survive unless the government extends the grants it has offered to pubs and hotels.

“A lot of pubs and breweries were already struggling. If they take on loads of debt, the system will break.”


Coronavirus: Boris Johnson preparing end to lockdown over the next fortnight


When will pubs open again in the UK?

How can I support my local?

You can join campaigns like Long Live the Local, who are trying to get the government to freeze beer duty to support pubs when they finally reopen.

The team is also working on some new plans to try and mitigate the massive toll our boozers are paying for coronavirus.

Budweiser is selling gift cards for pubs here, which they then match as a donation to your pub.

Landlords can add their pubs to the scheme too.

What is the Job Support Scheme and how does the ‘new furlough scheme’ work?

What was Keith Hufnagel’s cause of death?

How to make vegetarian lasagne

What is the Job Support Scheme and how does the ‘new...