THE real UK coronavirus death toll has passed 54,000 but weekly fatalities are the lowest since lockdown began.

New figures published by the Office for National Statistics (ONS) show that 48,866 deaths involving Covid-19 occurred in England and Wales up to June 12. 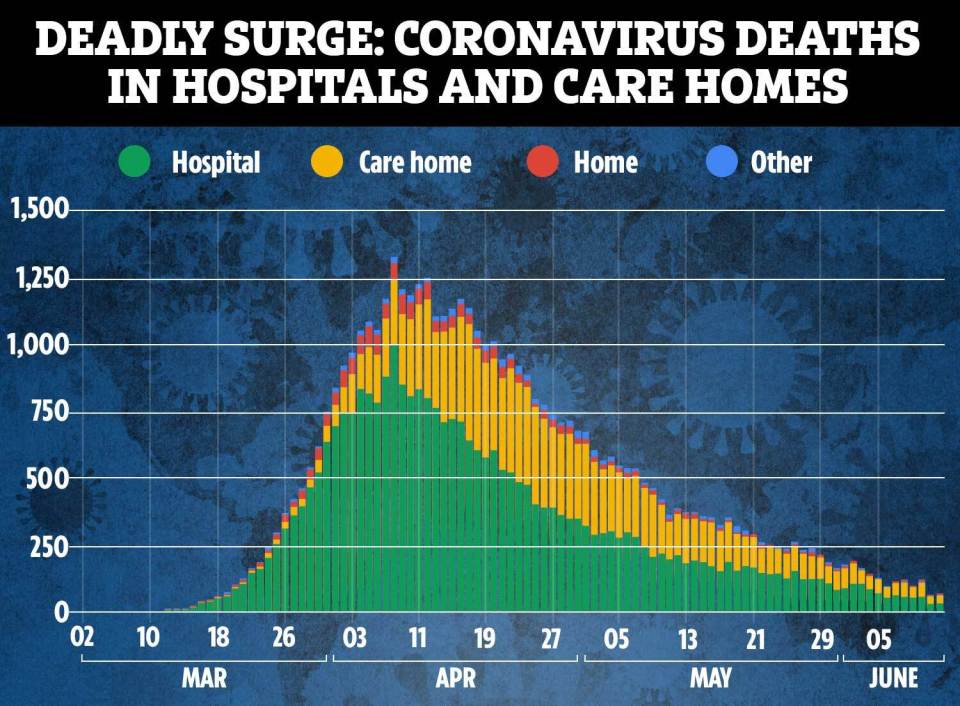 Combined with official stats from Scotland and Northern Ireland it means the overall British death toll has reached, 54,089.

The ONS figures, which include suspected cases, are nearly 12,000 higher than the official stats given by the government yesterday.

Ministers announced the UK death toll had reached 42,647 – with 15 more deaths overall in the past 24 hours – the lowest since March 15.

However, there is a difference in England and UK-wide figures because of how they are collected.

The ONS also found that the number of deaths registered in England and Wales was the lowest since lockdown began in March.

While deaths involving COVID-19 did not increase across any age group for the first time since the beginning of the pandemic.

Stats showed that 9,976 people died from coronavirus in the week ending June 12, which was 733 lower than the week before.

Sixty four per cent of the deaths were recorded in hospitals in England and Wales, with 30,868 people dying, while 14,404 lost their lives to the killer bug in care homes.

The North West of England continues to be the country’s epicentre for covid-19 after overtaking London, with the region recording the highest number of deaths for the sixth week running.

Figures published last week by the National Records for Scotland showed that 4,070 deaths involving Covid-19 had been registered in Scotland up to June 14.

The latest figures from the Northern Ireland Statistics and Research Agency and the countrys health department showed 807 deaths involving Covid-19 up to June 21.

These add up to a further 351 deaths that have occurred since June 13.

BACK OPEN FOR BUSINESS

It comes as Boris Johnson will today announce plans to end much of England’s lockdown from July 4 – exactly three months after he shut the country down.

The PM is expected to reveal that pubs, restaurants, museums and cinemas will be allowed to open their doors next month once again.

And to allow that to happen, he’s set to cut the 2m rule down to 1m to save millions of people from losing their jobs.


PM to end England lockdown on July 4 – what will he announce today?


Girl, 15, raped by man who pretended to need to use her phone

He will meet his Cabinet this morning – where Professor Chris Whitty and Sir Patrick Vallance will attend and give their advice to the PM – before making a statement in the House of Commons from 12.30pm onwards.

Mr Johnson thrashed out the details of today’s announcements – including the review of the two-metre social distancing rule – in a meeting with his most senior Cabinet ministers, scientific and medical advisers in No10 last night.

Northern Ireland Secretary Brandon Lewis said this morning: “One of the things we will be issuing, once we make these decisions today, and the Prime Minister makes his announcement, will be guidelines for all of us as individuals, and as employers, to look at how we act and practise in a safe and healthy environment as we go forward.”

Boris Johnson is expected to reveal that pubs, restaurants, museums and cinemas will be allowed to open their doors next month once again.[/caption]

Europe isn't going on vacation. That spells trouble for millions of workers

How Dr. Deborah Birx's political skills made her the most powerful person on the...

How Chelsea could line-up at Tottenham in EFL Cup with Frank...