PRESIDENT Donald Trump has accused social media platforms of enforcing a double standard after Facebook and Twitter took action against his recent posts.

“The Democrats are doing totally false advertising,” he tweeted.

“They have done NOTHING for years, including when Sleepy Joe was V.P., and they now have a Fake ad that my China Deal is losing us jobs. Opposite, & China is paying us $BILLIONS. Also, I LOVE Seniors & protect Preexisting C’s.”

He continued to rail against Facebook and Twitter in a follow-up tweet, saying: “Why are the Democrats allowed to make fake and fraudulent ads. They should be called out.”

It wasn’t clear which ad the president was referring to when he brought up Biden.

Trump’s callout came a day after Facebook removed an ad by his campaign that featured a red inverted triangle as artwork, a symbol used by the Nazis to identify political prisoners during World War II.

The red triangle is occasionally used by Antifa activists to identify themselves, similarly to how gay rights activists use a pink triangle, according to the Associated Press.

The photo was accompanied by text asking Facebook users to sign a petition against Antifa, a loosely-organized anti-fascist movement.

Hours later, Twitter added a “manipulated media” warning to a now-disabled parody video he tweeted of a “racist baby” that attacked CNN’s coverage of US race relations.

The doctored video prompted Twitter to link to a web page outlining its policies relating to selectively edited clips.

According to the platform, Trump’s tweet was marked because “you may not deceptively promote synthetic or manipulated media that are likely to cause harm.”

“In addition, we may label Tweets containing synthetic and manipulated media to help people understand their authenticity and to provide additional context.”

Trump has gotten into trouble on social media before.

Days after violent protests in Minneapolis were ignited by the death of George Floyd, Twitter added a warning on Trump’s tweet calling rioters thugs, saying it “glorified violence”.

The president warned that “when the looting starts, the shooting starts,” a phrase used by Miami Police Chief Walter E. Headley during the city’s violent race riots in 1967.

Trump has also accused Twitter of trying to stifle conservative voices after two of his tweets about mail-in voting were labeled potentially misleading. 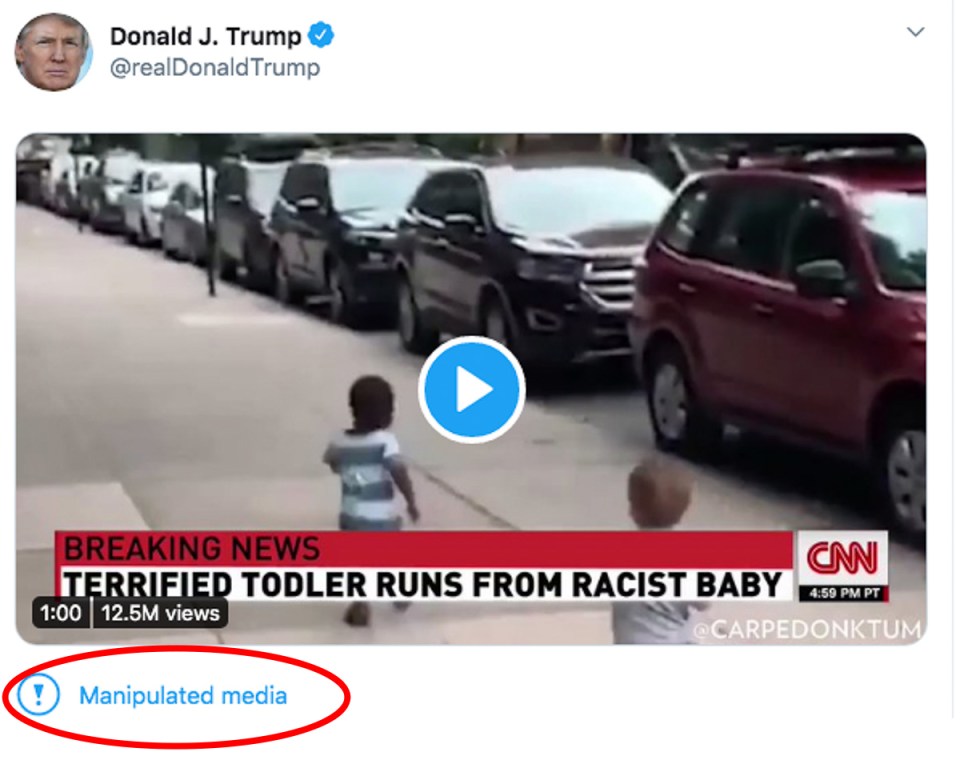 “Big Tech is doing everything in their very considerable power to CENSOR in advance of the 2020 election,” he tweeted last month.
“If that happens, we no longer have our freedom. I will never let it happen. They tried hard in 2016, and lost. Now they are going absolutely CRAZY. Stay Tuned!!!”

Twitter has also taken steps to start alerting users to posts that contain misleading information on the coronavirus pandemic as a way to stop the spread of misinformation.