President Trump said Monday that he’s ‘heard some great reports’ about the effectiveness of hydroxychloroquine treating the coronavirus, so didn’t understand why the Food and Drug Administration revoked its emergency use authorization for the drug.

‘I have heard so many people who are so thrilled with the results from Hydroxy,’ Trump said.

During a White House meeting, Trump told reporters that he ‘didn’t know about the report’ that the FDA put out, but he had heard good things out of France, Spain and other places. 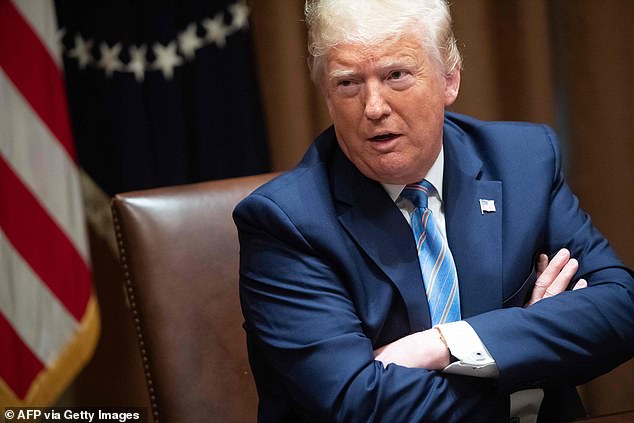 President Trump said during a roundtable event Monday that he had ‘heard some great reports’ on the effectiveness of using hydroxychloroquine to treat COVID-19, despit the Food and Drug Administration revoking its emergency use authorization for the drug 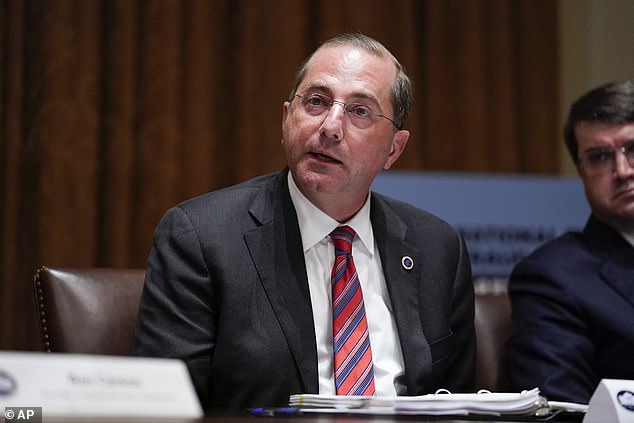 Trump turned to Health and Human Services Secretary Alex Azar noting that the only place he hadn’t heard good news about the malaria drug was ‘coming out of Alex’s agency,’ asking the cabinet head what gives.

Azar said the drug is still being studied for possible use at an earlier stage of the disease.

‘A lot of the data that has come out that was more negative was people who were quite ill in the hospital,’ Azar said.

Based on new evidence, the FDA said Monday it was no longer reasonable to believe that hydroxychloroquine and the related drug chloroquine may be effective in treating the illness caused by the novel coronavirus.

The FDA also warned that the drugs have been shown in lab studies to interfere with Gilead Sciences Inc’s antiviral drug remdesivir – the only medicine so far to show a benefit against COVID-19 in formal clinical trials.

The move comes after several studies of the decades-old malaria pills suggested they were not effective either as a treatment for or to prevent COVID-19.

British scientists earlier this month halted a large trial after deciding that hydroxychloroquine was ‘useless’ at treating COVID-19 patients.

Hydroxychloroquine’s anti-inflammatory and antiviral properties suggested it might help COVID-19 patients, and the FDA authorized its emergency use in March at the height of a pandemic for which there were no approved treatments.

The early enthusiasm was partly based on laboratory experiments in which the drug appeared to neutralize the virus.

Chloroquine, which is not approved for any use in the United States and has more side effects, has not fared any better in human clinical trials.

In March, Trump said hydroxychloroquine in combination with the antibiotic azithromycin had ‘a real chance to be one of the biggest game changers in the history of medicine,’ with little evidence to back up that claim.

He later said he took the drugs preventively after two people who worked at the White House were diagnosed with COVID-19, and he urged others to try it.

‘I can’t complain about it, I took it for two weeks and I’m here – here we are,’ Trump told reporters Monday.

He answered in the affirmative when asked if he would still give quantities of hydroxychloroquine to Brazil.

Trump said he would because Brazilian President Jair Bolsonaro had asked for it.

Brazil has become a coronavirus hotspot in the last several weeks, as deaths near 44,000 Brazilians.

But France, Italy and Belgium late last month halted use of hydroxychloroquine for COVID-19 patients.

In the U.S., Americans can still get the drug and use it against COVID-19 if their doctors prescribe it.

‘Back The Blue’ & ‘Black Lives Matter’ protesters spar as pro-cop group refuses to...

Renters reveal must haves for first time buyers – double glazing and broadband are...

China claims it will be 'carbon neutral' by the year 2060