Brits will be able to take holidays in beauty spots in places like Devon and Cornwall – as the Prime Minister officially announced staycations from July 4.

Boris Johnson made the announcement in the House of Commons, paving the way for families languishing in lockdown to finally get away from a break.

Hotels were given the green light to throw open their doors as long as they were kept clean and safe. 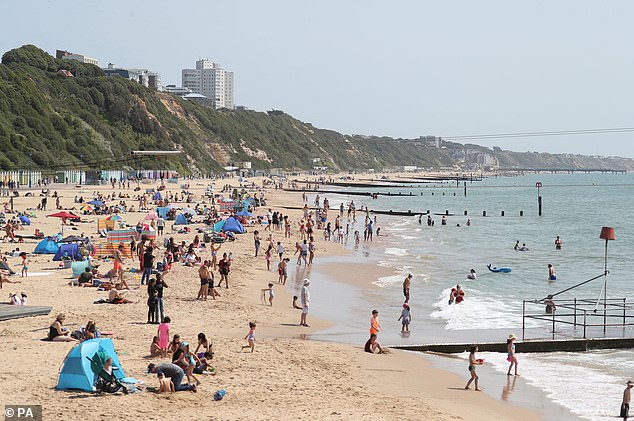 The news announced by the Prime Minister paved the way for staycations in seaside towns, such as Bournemouth in Dorset

Mr Johnson added: ‘Now is the time to send out a welcoming signal to those from other parts of our country, to roll out the welcome mat, rather than the ‘not welcome here’ sign.

‘From July 4 provided that no more than two household stay together, people will be free to stay overnight in self-contained accommodation including hotels and bed and breakfasts as well as campsites as long as shared facilities

‘Most leisure facilities and tourist attractions will reopen if they can do so safely including outdoor gyms and playgrounds, cinemas, museums, galleries, themes parks and arcades as well as libraries, social clubs and community centres.’

But holidaymakers will expect to see some big changes when they do finally start their staycation. They include:

A statement from the Government spelled out in full that the PM had signalled summer holidays were back on.

It said: ‘He has set out that two households will be able to meet up in any setting with social distancing measures, and that people can now enjoy staycations in England with the reopening of accommodation sites.’

The spectre of Coronavirus will mean a lot of changes to how people may have usually taken holidays in England before the virus struck.

Management at the Camping and Caravanning Club say all but 26 of their sites will open, but subject to new conditions. 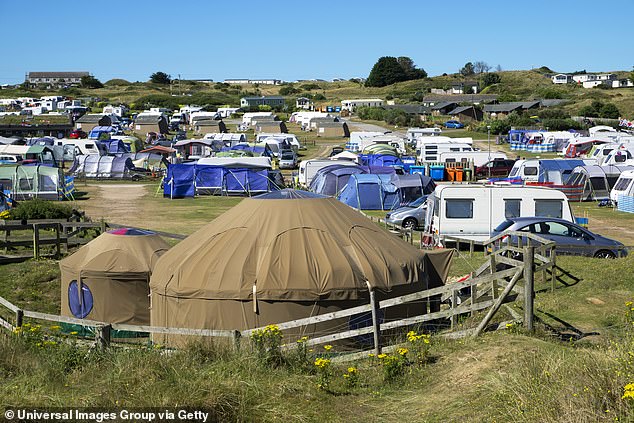 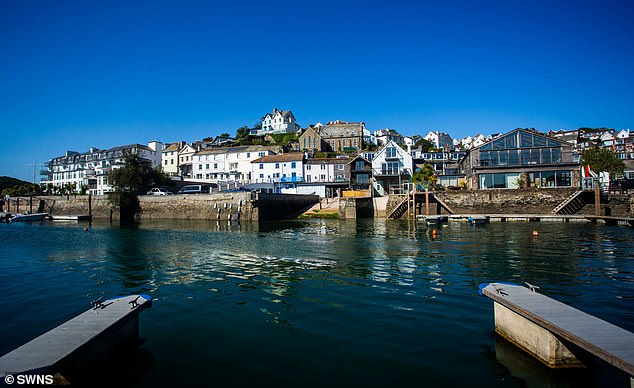 Those arriving will pay with contactless check-in, which will see the cost of the stay automatically taken from their bank.

People will have to stay inside their vehicle before staff directs them to their pitch, which will be six metres away from anyone else staying.

If the site has facility blocks for washing and toiletries managers will reduce the number of guests on site so they can stay clean. They will get two deep cleans and four additional clear-ups every day.

They say there also will be signs and floor markings as a common sense reminder to keep two metres from others.

Campers have also been told that they will now no longer be able to have any day visitors to their pitches.

They are also being asked to bring with them their own hand sanitiser and soap supplies. 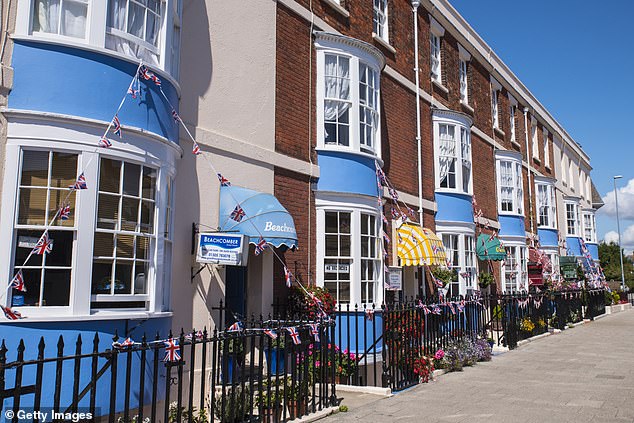 Hotel operators have already revealed how they will reopen after lockdown with mini-bars and buffet breakfasts taken off the menu.

Some of the biggest chains have announced a raft of changes today as Mr Johnson allowed hotels to reopen.

French company Accor, which owns brands including Novotel, Mercure, Ibis and Sofi tel, is aiming to reopen some of its 270 hotels from the start of July.

The chain will introduce new systems, which will include taking paperwork and telephones out of rooms, The Guardian reports today.

Meanwhile, Jurys Inn and Leonardo Hotel Groups has today announced a ‘five point plan’ to get its hotels reopened – which includes going cashless and delivering breakfasts to rooms.

And like Hilton Hotels and Resorts group, they have promised to deep clean ‘key-touch areas’ in all rooms after guests have left. 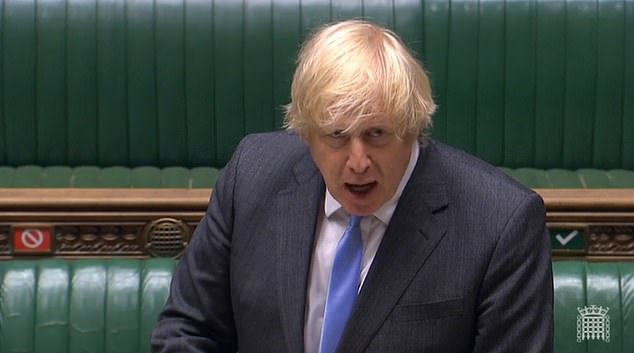 Check-in times are likely to be staggered, or set later in the afternoon, to allow for deep cleaning of rooms. At the seven-strong collection of The Pig Hotels in south-west England, for example, this has switched from 3 pm to 4 pm.

Valet parking and baggage handling could also be a thing of the past, though luggage may be disinfected on arrival.

Protective screens, distance-marking lines and one-way routes may be implemented in larger properties.

People will be asked to hire Portaloos, or bring their own, so you don’t share toilet block with whole of the rest of the campsite.

Hotel bars, if they are opened, will likely be table service only, while dining tables will be arranged to satisfy the two-metre rule, and probably be without linen.

Room service is also encouraged with many properties dropping the tray charge. Menu choices are likely to be restricted and delivery will be only to the bedroom door.

The speech was greeted with relief by tourism bosses who hailed it as a much-needed step in the right direction.

Joss Croft, chief executive of trade association UKinbound, said: ‘Today’s announcement that pubs, restaurants, hotels and attractions can officially open on July 4 will come as a huge relief to businesses across the tourism and hospitality industry, who have earned very little revenue since the beginning of March.

‘Reducing social distancing from two metres to one will also ensure that many more businesses will be able to viably reopen at the start of next month.

‘We’re pleased that the Government has also listened to industry and is on the verge of agreeing air corridors with a number of countries – a step that signals that the UK’s tourism inbound industry is keen to welcome international tourists again.’

Her joy was echoed by travel organisation Abta, but they warned plenty of notice had to be given to the sector.

A spokeswoman said: ‘The measures announced today to ease lockdown further in England and allow people to stay overnight in self-contained accommodation, and take domestic holidays from 4 July, is a step in the right direction on the road to restarting travel in earnest.

‘With travel restrictions in place for the last few months, there is latent demand to travel with people wanting to visit close family and friends and have something to look forward to. 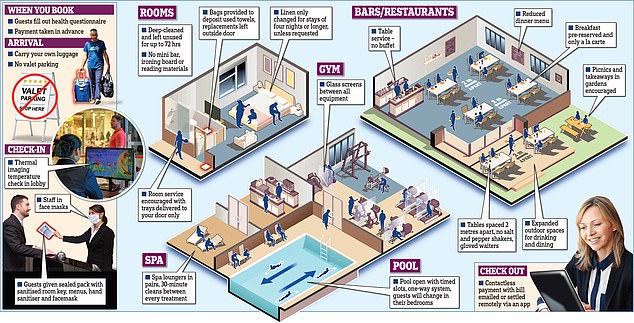 ‘However, the travel sector remains in a perilous state, with redundancies announced each week, and more needs to be done to help the whole sector recover.

‘We need a more comprehensive road map as soon as possible that includes time frames for relaxing international travel restrictions too so businesses and customers can plan ahead.

‘The process of sending people on holiday is not like turning on a tap. As much advance notice as possible from the Government is required for travel companies to restart operations.’

Some camping enthusiasts today reported they had been asked to hire or bring their own portaloos by some sites who had started taking bookings.

And the National Caravan Council described the lockdown easing a boost for the industry.

Director General John Lally said: ‘This is great news for the 2+ million caravan owners and for the parks industry in England – and not a moment too soon. 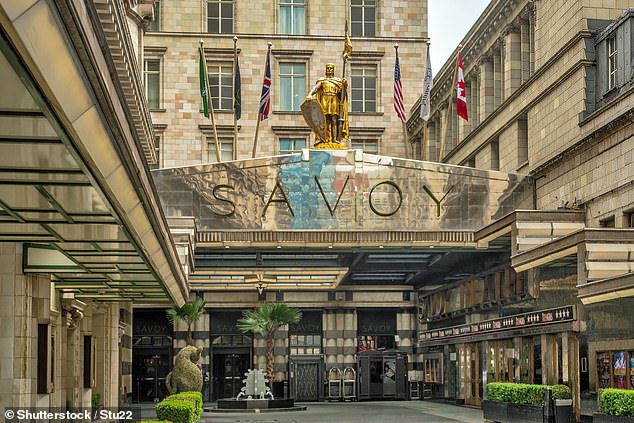 High-end sites, including London’s Savoy Hotel, will reopen at a later date, as will airport hotels, the chain says

‘We have been working hard to explain to Government that caravan products are ‘socially distanced by design’ and that the parks industry across the UK can be safe places for people to holiday. Not only are caravans required to be 5m or 6m apart, but caravan parks are big open spaces, the ideal base for hard working families to enjoy the great outdoors.

‘Parks already are working on safety protocols to keep their staff and visitors safe. So we are delighted that the great British caravan holiday can recommence in less than two weeks time.’

The relaxation on July 4 – Independence Day in the US – comes amid growing optimism that the virus, which has claimed more than 42,000 lives in the UK, is finally reducing to manageable proportions.

Some 2.2million vulnerable people who have been ‘shielding’ for more than three months were yesterday told they could finally leave their homes from July 6.

Man, 25, ‘beat stepson, 7, to death with stick as mum did nothing & left youngster dying before calling for help’

Danielle Armstrong hits back at fan who accuses her and fiancé Tom Edney of...