TWO American astronauts are being sent back from space to Florida in hours — despite Hurricane Isaias threatening the Sunshine State.

Nasa announced on Saturday that weather conditioners were a “go” for Doug Hurley and Bob Behnken, aboard SpaceX’s Dragon capsule, dubbed Endeavour, to return to Earth.

Nasa astronauts Douglas Hurley, left, and Bob Behnken are seen here ahead of their launch into space in May [/caption]

Their targeted landing site off Pensacola, in the Florida Panhandle, and the alternate landing site in Panama, were both deemed OK for landing.

Flight controllers have been closely monitoring Hurricane Isaias and working to evaluate possible impact to the landing sites.

Isaias’ winds reached 85 mph on Saturday morning and some strengthening was possible later, the National Hurricane Center in Miami said.

The space agency said that Elon Musk’s company will “monitor changes to conditions until 2.5 hours prior to the scheduled undocking.” 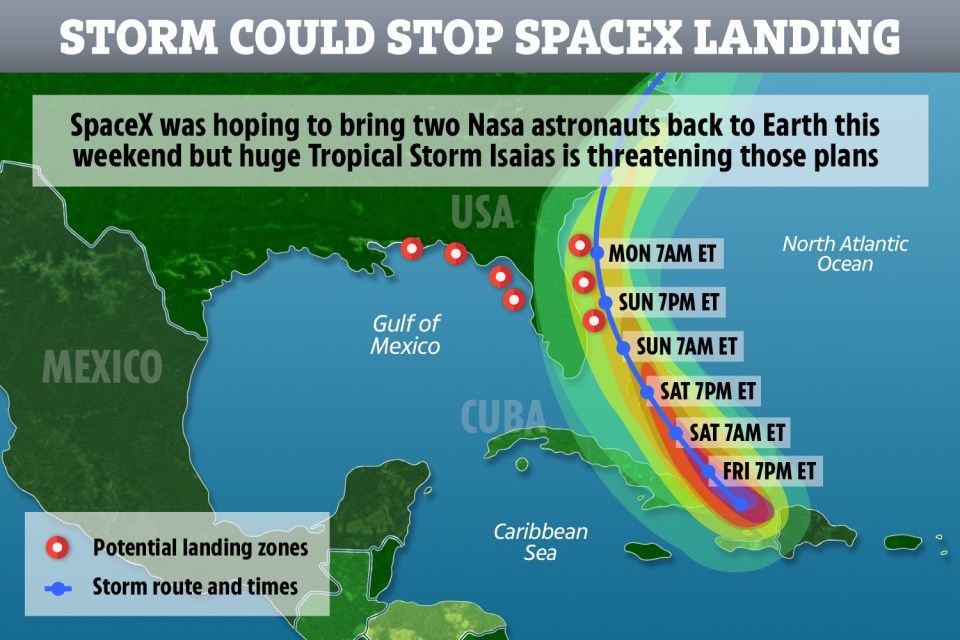 “We don’t control the weather, and we know we can stay up here longer — there’s more chow, and I know the space station program has more work that we can do,” Behnken told reporters during a press call.

The splashdown will be SpaceX’s first with astronauts on board, and the astronauts are currently scheduled to undock from the International Space Station (ISS) at 7.34pm ET.

Then the astronauts are expected to splash into the ocean at 2.48pm ET on Sunday, and officials have said it will take about an hour to get the capsule hauled by crane onto a SpaceX recovery ship.

Flight surgeons will be among the dozens of the recovery team members.

The astronauts are currently scheduled to undock from the International Space Station on Saturday night around 7.30[/caption]

Hurley said if he and Behnken get sick while bobbing in the waves awaiting recovery, it won’t be the first time for a crew.

Astronauts who returned from Skylab, Nasa’s first space station, in the 1970s, did not feel well following splashdown, Hurley said.

Hurley and Behnken first launched into space on May 30 from Nasa’s Kennedy Space Center in Florida — the first launch of a crew from the US in close to a decade.

The SpaceX capsule has been docked at the ISS since May 31, which has allowed the US astronauts to help out with spacewalks and experiments.

Isaias is currently a Category 1 hurricane and has already caused high winds and flash floods in Puerto Rico as well as damaging property in the Bahamas and the Dominican Republic.

Most read in US News


Parents divided over video of man spanking a child – so is it too severe?

The storm’s current path is bringing it straight towards several potential landing sites for the SpaceX mission that Nasa is overseeing.

The Crew Dragon spacecraft that will bring Behnken and Hurley home can’t land if there are winds exceeding 10 mph.

It also can’t land if rain, lightning, or big waves are expected.

Emma Willis snaps at The Voice Kids judges in furious outburst: 'Come on!'