Convalescent plasma therapy did not significantly improve the conditions of patients with life-threatening coronavirus, a new study suggests.

Among patients with ‘life-threatening’ cases, meaning in organ failure or needing to be placed on ventilators, more patients recovered who didn’t receive the treatment than those who did.

However, there was some good news.

Over 28 days, ‘severely ill’ patients, meaning those who were sick but not ill enough to be placed in the ICU, recovered roughly five days faster with plasma treatment and 91 percent recovered compared to 68 percent of the control group

‘Severely ill’ patients recovered roughly five days faster with plasma treatment and 91% recovered compared to 68% of the control group (left) but, among ‘life-threatening’ patients, only 20.7% of those who received plasma recovered in comparison with 24.1% of those who didn’t (right) 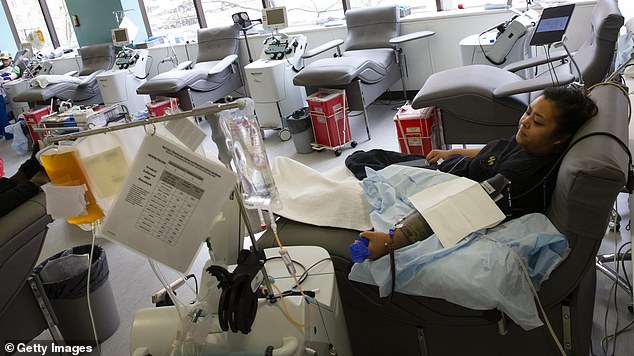 Convalescent plasma therapy is when the liquid portion of blood is taken from a recovered coronavirus patient, which is transferred into a sick patient in hopes they will develop the antibodies needed to fight off the infection. Pictured: Melissa Cruz, donates COVID-19 convalescent plasma at Bloodworks Northwest in Seattle, Washington, April 17 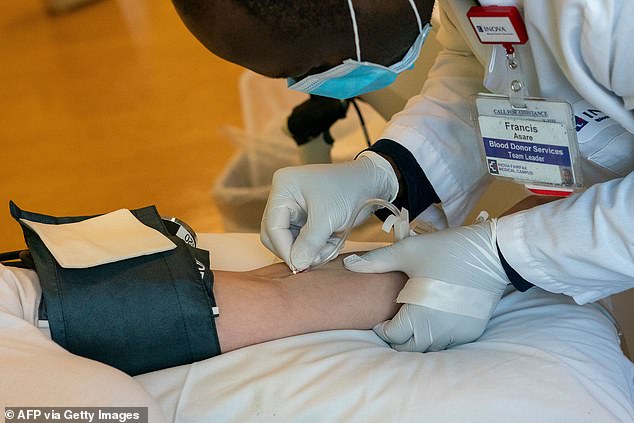 Researchers said there was no significant differences among mortality rates or time from treatment to discharge, Pictured: A phlebotomist inserts an IV line as Mckinley Edelman, 26, a recovered COVID-19 patient, donates plasma to MedStar Georgetown University Hospital in Dulles, Virginia, April 22

Convalescent plasma therapy is an experimental treatment in which plasma from a recovered COVID-19 patient is used on an infected patient in critical condition.

The hope is that the antibodies and immunity in the blood of a healthy person will be transferred to a sick person.

From this, the infected person will then develop the antibodies needed to fight off the coronavirus.

The treatment was first used during the Spanish Flu pandemic of 1918, a situation not far removed from the coronavirus pandemic.

For the study, published in JAMA, the team looked at 101 patients hospitalized in  seven medical centers in Wuhan – where the virus originated – from February 14 to April 1.

Half of the patients were in severe respiratory distress and/or suffering from hypoxemia, which is when there are low levels of oxygen in the blood.

The other half were in life-threatening conditions, such as experiencing organ failure or requiring mechanical ventilation.

There were some encouraging results among patients who were ‘severely ill’ but not sick enough to be in ICUs.

They recovered roughly five days faster if they got the plasma treatment, and 91 percent of them improved within 28 days of starting treatment compared to 68 percent of the control group.

The researchers also said there was no significance among mortality rates or time from treatment to discharge.

By day 28, 15.7 percent of the plasma group and 24 percent of  the group had passed away while 51 percent of plasma patients and 36 percent of control patients were discharged. 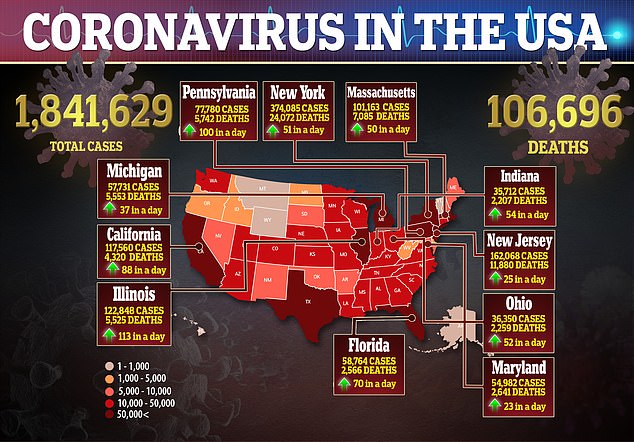 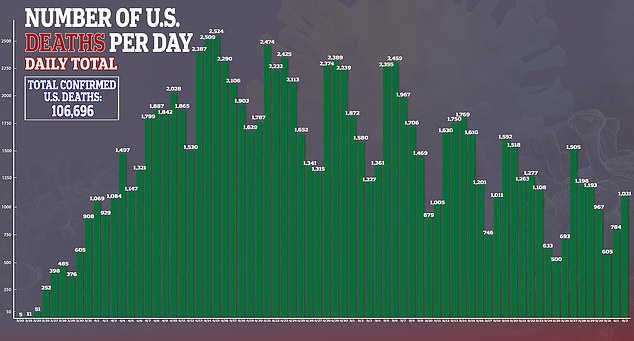 They noted that the trial was ended early when they failed to recruit 200 patients.

‘Interpretation is limited by early termination of the trial, which may have been underpowered to detect a clinically important difference,’ the wrote.

The US Food and Drug Administration (FDA) approved the use of convalescent plasma for treatment last month.

‘Prior experience with respiratory viruses and limited data that have emerged from China suggest that convalescent plasma has the potential to lessen the severity or shorten the length of illness caused by COVID-19,’ the agency said in a statement on April 16.

However, the FDA added it must be given on case-by-case basis, and patients who receive it must be experiencing conditions such as respiratory failure or multiple organ failure.

People can donate plasma more than once, but have to wait several weeks after donating.

In the US, there are more than 1.8 million confirmed cases of the virus and more than 106,000 deaths. 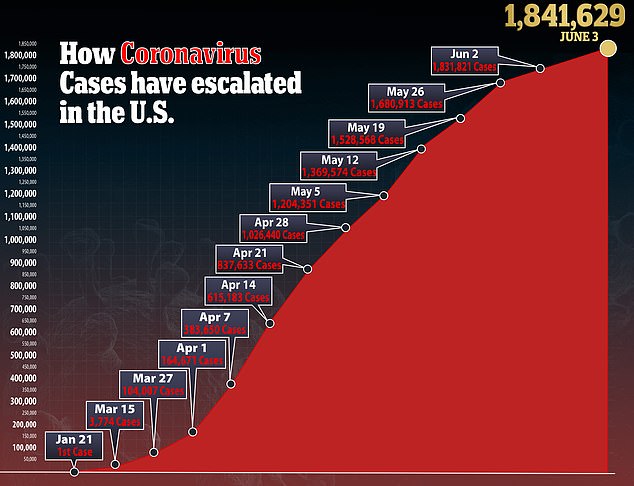 Who will be the cast of the Real Housewives of Salt Lake City?

Economists warn of U.K. jobs crisis ahead of crucial budget