AN AMERICAN man has today been named as one of the three people killed in the horrific terror attack in Reading over the weekend.

Joe Ritchie-Bennett, 39, was remembered as a “brilliant and loving” man as his dad blasted his “senseless” killing after the carnage unfolded on Saturday evening.

It is understood he was friends with James Furlong, the first victim to be named from the terror attack that unfolded on Saturday.

And Joe’s father, Robert Ritchie, told Eyewitness News: “The family is heartbroken they have lost their brilliant and loving son. This was senseless.”

Ritchie said that Joe had moved to the UK 15 years ago – first working for a London law firm before moving to a Dutch pharmaceutical company based in Reading.

And tributes today poured in for Joe, who had lost his partner Ian to cancer a number of years ago.

One pal wrote: “So so sad to hear that Joe Ritchie-Bennett was one of the murder victims in Reading this weekend.

“You can now be reunited with your hubby Ian Richie-Bennett.

Another college roommate of Joe said: “I’ve spent much of the day trying to come to terms with such a senseless loss.

“I will always remember your wicked sense of humour, kind heart, appreciation of a good cocktail and passion for life.”

And another pal added: “You were taken too soon my lovely but I know you will now be with your darling Ian Ritchie-Bennett. Your star will shine so bright in the sky.”

Inspirational teacher James Furlong was killed in the attack[/caption]

The 36-year-old was remembered as a ‘beautiful, intelligent, honest and fun’ man[/caption] 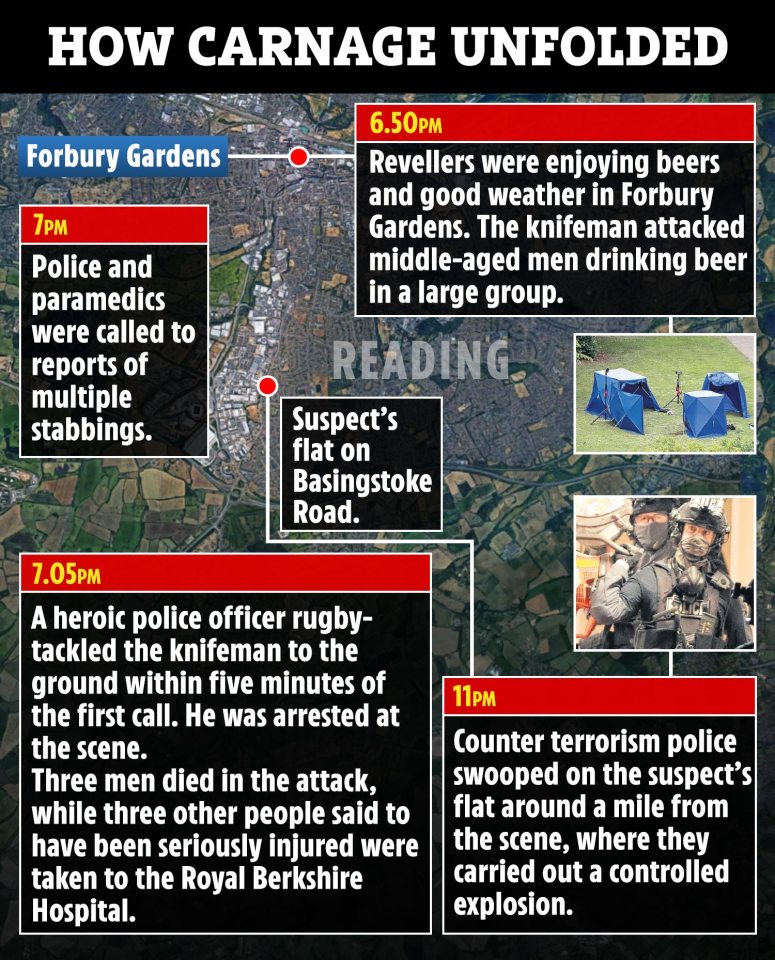 It comes after tributes poured in for James Furlong, an inspirational teacher killed in the attack.

His parents Gary and Janet, have released the following statement: “James was a wonderful man. He was beautiful, intelligent, honest and fun.

“He was the best son, brother, uncle and partner you could wish for. We are thankful for the memories he gave us all.

“We will never forget him and he will live in our hearts forever.”

Survivors and witnesses described the carnage at Forbury Gardens on Saturday evening as suspect Khairi Saadallah allegedly lashed out at groups in the sun.

The suspect is believed to have dropped his knife before fleeing from the park. A policeman then rugby-tackled him to the ground after a chase.

Questions have now surfaced after it was revealed the terror suspect was on MI5’s radar had left prison just 16 days ago.

Khairi Saad­allah was a ticking timebomb who wanted to travel to Syria to fight, The Sun revealed today.

The Libyan asylum seeker, 25, was also on medication for post traumatic stress and a suspected personality disorder before his release from prison 16 days ago.

And in 2018 he was granted leave to remain in the UK for five years despite convictions for violence.

Most read in UK News


Boy, 6, 'killed in dad's care' was living with him after mum jailed for murder


Nurse, 22, and boyfriend, 24, die as Audi hits tree and bursts into flames

Saadallah’s wild moods were controlled by drugs in jail. He was not deported because human rights laws block returning criminals to “failed” states such as Libya, sources said.

Saadallah spat at Judge Sophie Toms at Reading magistrates court after she sentenced him for previous offences in March 2019.

Other offences — none of which were terror-related — include possession of a bladed weapon and assaulting a police officer, which landed him an eight-month term.

Woman disciplined for calling workmate a ‘nonce’ wins £8,000 after claiming she was imitating...

Wales to ban supermarkets from selling booze after 10pm when pubs...