Britain could roll out ‘batch’ Covid-19 testing to sample swabs from up to ten people at a time, it has been claimed.

Ministers are reportedly considering the idea to ramp up testing, with the technique having already been used in Germany.

The potential move, reported by The Times, comes after a study found routine tests for all office workers could help to eliminate the virus, in the absence of a vaccine.

Cambridge University scientists say swabbing every employee – even those without symptoms – every two-to-four weeks would slash infection rates.

Experts said healthcare staff should get priority for tests because they are the most likely to get infected and pass the disease to others.

They claimed it was ‘essential’ that the strict testing measures were implemented in the UK to get the economy back up and running without a second wave.

But they warned Britain’s testing capacity was not up to scratch and must be scaled up vastly from fewer than 200,000 daily swabs to at least 2million for them to work.

They also recommended testing booths on street corners because telling people to travel miles to a drive-through centre deters them from going, they claim. 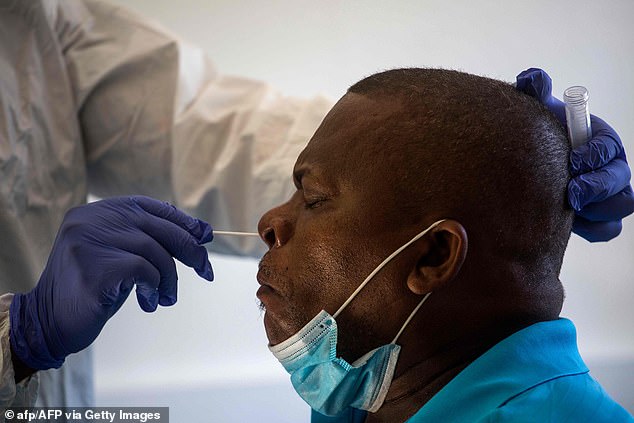 Routine swabbing of all office workers is the only solution to easing lockdown in the absence of a coronavirus vaccine, a Cambridge University study has claimed (file)

At the moment only symptomatic people can be tested for Covid-19 in the UK, but they have to book a slot at a drive-through centre online.

Between a third and two thirds of Covid-19 patients show no sign of infection but are contagious, which makes the virus so hard to contain.

Healthcare workers are still not being routinely swabbed in the UK, which scientists believe is the reason why infection rates are not falling faster in the country.

The Times report did not specify exactly how the batch testing would work, or give any other details.

Covid-19 samples are already batched so hundreds can be analysed in machines at any one time, scientists say.

But pool testing – a method commonly used in blood banks – is not currently being used in the UK for coronavirus.

German researchers found the method can detect one positive in a single test tube samples taken from 30 patients.

However, if the group tests positive, then each sample has to be individually tested in order to work out which one or more tripped the test for the pooled sample

For the Cambridge study, currently being reviewed by independent scientists, the academics looked at staff working at Addenbrooke’s Hospital.

Workers on Covid-19 wards were swabbed every fortnight for the virus and staff in other patient-facing roles were tested once a month.

Infection rates dropped in symptomatic staff and their contacts but the biggest fall was seen in those who showed no signs of infection.

The World Health Organization has warned that a second wave of coronavirus could hit this autumn, with nations urged to develop a successful test, track and isolate programme.

His comments came a day after UK MPs were told the Government’s contact tracing smartphone app – previously heralded as a fundamental pillar of the country’s response to the pandemic – could be scrapped.

The UK Government made a dramatic U-turn over its heavily-delayed coronavirus tracking app, scrapping its own in place of an existing system, the NHSX app, developed by tech giants Apple and Google – which may not be ready until the winter.

Dr Kluge told a Russian-centred WHO briefing on Thursday that it was ‘well possible’ that the autumn could have an impact on the number of cases, in the same way flu cases peak towards the end of the year.

He said: ‘It’s well possible that when the autumn starts and we have also the seasonal influenza, there is the possibility of a seasonal effect on the virus – but we’re not sure yet – that then we will see a second wave.

‘So the lesson is that we have to implement what we know works – at the core of the strategy is to find as early as possible, isolate, test suspected people from Covid, and if needs be treat them without any stigma or discrimination.

‘At the same time (governments need) to track and quarantine contacts – contact tracing is an essential element of this strategy.

‘But there is no single solution.’

The results are now being reviewed by Public Health England to see if the measures can be applied more widely in the UK.

Michael Weekes, of the Cambridge Institute for Medical Research, who carried out the study, said a massive scale-up in testing was going to be ‘essential’.

‘In order to detect mild or truly asymptomatic cases, particularly very early during those infections when people are at their most infectious, you do need a regular testing programme.

‘I think that’s one of the key cornerstones in getting on top of this. I think if there is political will it shouldn’t be difficult to generate the capacity.’

Dr Weekes argued that the government must ‘make it easy for people to get tested rather than demanding they drive somewhere miles away.

‘I think having street-based testing booths and mini-test centres throughout the country will be one way that it is important to go so it’s very easy for people to go and get tested.’

The Government’s Scientific Advisory Group for Emergencies has highlighted a lack of routine testing of healthcare workers as a key reason why cases are not falling faster in the UK.

This may be allowing infections to trickle out of hospitals and care homes and spread through the community.

There is growing concern that, as society returns to normal, the virus will be able to spread much faster.

SAGE is now modelling the effect of routine checks for taxi drivers and office and shop workers who come into contact with large numbers of people.

There is now mounting pressure on Health Secretary Matt Hancock to make testing available for all healthcare staff on a regular basis, regardless of whether they have symptoms.

Reacting to the findings, Mr Hunt told The Times: ‘This authoritative study demonstrates that track and trace in the community alone will not be enough: until we introduce weekly testing of frontline staff in hospitals and care homes we will just not isolate Covid carriers quickly enough to get the virus under control.’

Jonathan Ashworth, the shadow health secretary, said: ‘Regular testing of all NHS staff must now be an urgent priority.’

Chris Hopson, chief executive of NHS Providers, which represents hospital trusts in England, said: ‘A clear testing strategy is now more important than ever as it is key to restarting routine services which were paused during the early weeks of the pandemic.’