THE man suspected of killing three people in a terror attack in Reading had previous convictions for minor violence-related offences, it has emerged.

Khairi Saadallah, 25, originally from Libya, is accused of carrying out a random knife attack in Forbury Gardens in the town’s centre shortly after 7pm on Saturday.

An aerial view of the scene of the attack [/caption]

Three people died following the attack and a further three were hospitalised with serious injuries, though two have since been discharged.

The suspect was detained and arrested, and Thames Valley Police have this morning said the incident is being investigated as an act of terror.

No further details of a possible motive have been released, but mental health is being considered as a major factor, a source told the PA.

Saadallah is reported to have been granted asylum after arriving in the UK a number of years ago.

He has at least one previous conviction for a “minor violent offence”, Sky News reported, and he is thought to have spent at least 12 months in jail.

He was being supervised by the National Probation Service, the Guardian reported, and court reports suggest a number of additional convictions for a man of the same name, age, and address.

None of the suspect’s previous convictions are believed to be terror-related.

In April last year, a man of the same name and age was imprisoned for two months for a common assault on an emergency worker and fined £115 for possession of a blade, the Reading Chronicle reported. 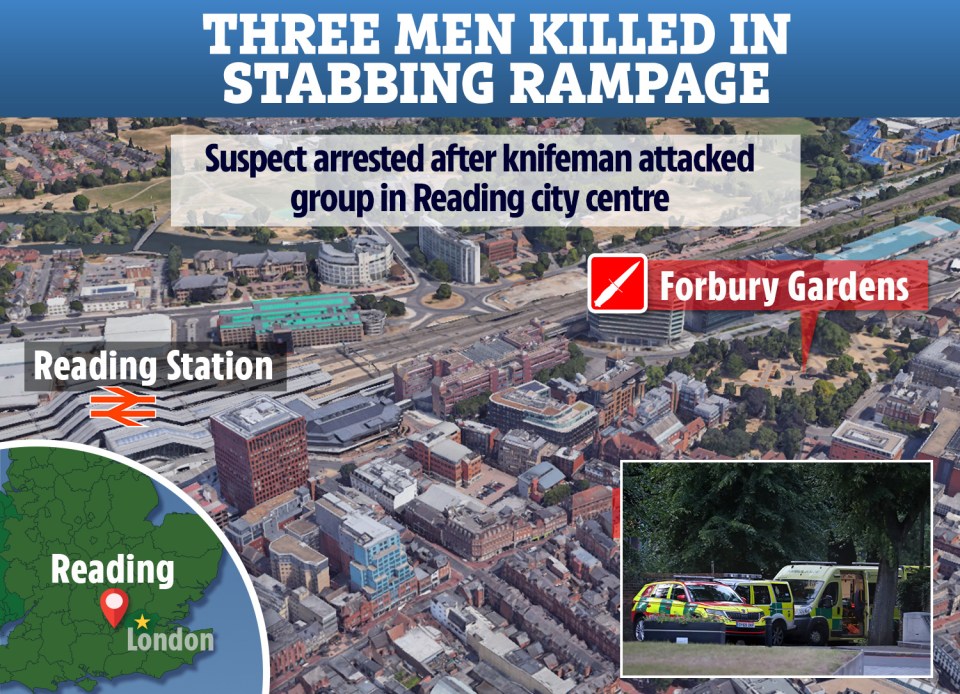 A neighbour, who gave his named only as Adam, told the Sun that Saadallah had been “in and out of prison”.

“A few months ago he threw his TV off the balcony and started smashing up his flat,” he said.

“Police were called and he was recalled to prison. He only got out about three weeks ago.”

A foreign national given a jail term of 12 months or more for a violent offence would typically face automatic deportation, but at present the UK would not deport a person to Libya because of the country’s ongoing civil war.

Yesterday’s attack will raise questions about whether Saadallah should have been more closely monitored following his release.

“He was just sitting on the stairs with his head against the handrail,” he said.

“He was sitting there when I left and when I came back three hours later he was still there.

“He looked deep in thought.”

A former acquaintance has also claimed he used to buy cannabis from Saadallah after initially being approached by him in an alleyway.

Speaking to the Sun, Kieran Vernon, 26, said: “I used to meet him four times a week to buy cannabis from him down an alley near his flat.

“I only met him a few weeks ago so we haven’t chatted that much, but told me how he’d been in prison that he was originally from Libya.

“He loved whisky too.”

Footage showed a suspect being pinned to the floor and arrested following yesterday’s attacks.

Police later carried out a raid on an apartment in a block on Basingstoke Road, less than a mile from the scene.

Around 20 armed police and counter-terrorism officers were reportedly seen outside carrying automatic rifles and a disc cutter.

More than a dozen neighbours were evacuated during the raid, and witnesses reported hearing a controlled explosion shortly after 1am.

Police have confirmed they are not looking for anyone else in connection with the attack.


Corona getting weaker and may die out WITHOUT a vaccine, virus expert claims

The prime minister has this morning held a meeting on the incident with police, security officials, and ministers.

The case follows that of Hashem Abedi, who was last year extradited to Britain from Libya to face justice for his role in the Manchester Arena Bombing, carried out by his brother, Salman Abedi, in 2017.

Hashem was subsequently convicted on 22 counts of murder, though his sentencing, originally scheduled for April, has been postponed amid the coronavirus pandemic.

Judges rule Universal Credit assessment dates are ‘irrational and unlawful’ – and it could...

Mouth cancer symptoms: The taste in your mouth that may signal...

Inside London Zoo during lockdown as rare ‘African Unicorn’ prepares to...