Once Pornhub’s most viewed star, Khalifa has carved out a new career since she retired from the Adult industry in 2014.

Khalifa is a West Ham supporter and the Lebanese-American stunner hosted the Sportsball podcast in 2018.

She picked her dream Premier League line-up to mark the return of the English top-flight after play was suspended in March amid the spread of Covid-19.

The former Adult entertainer has a massive presence on social media with over 20million Instagram followers and more than three million fans on Twitter.

“That’s because I know very little about the Premier League although I enjoy it greatly.” 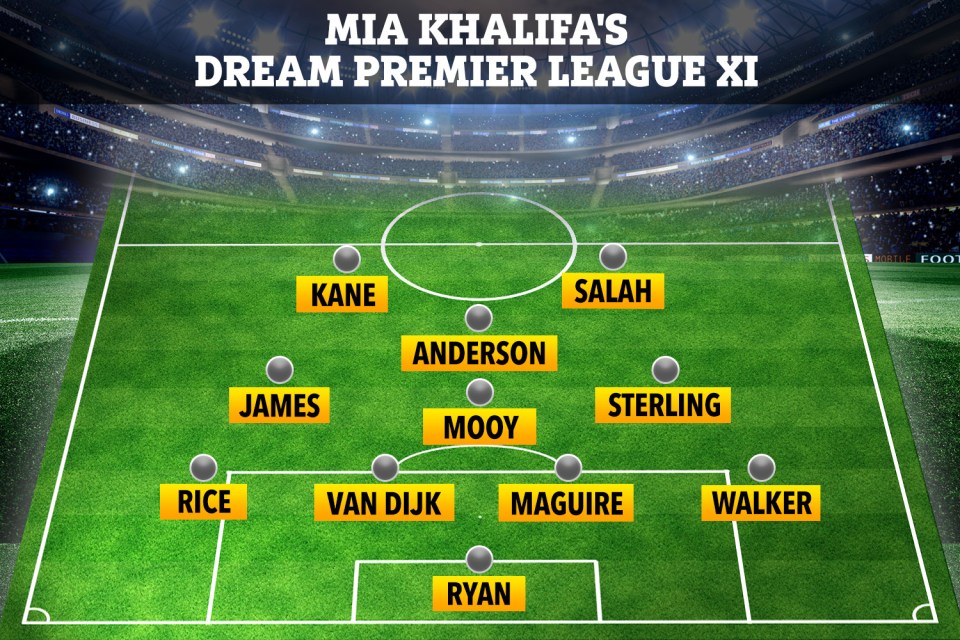 The video was produced in conjunction with URef, which Khalifa is co-founder of and allows fans to rate Premier League referees.

It also sees her pick Felipe Anderson and Declan Rice from her beloved Hammers in her squad.

She said Anderson was her favourite player in the league and Rice made it in courtesy of scoring his first league goal on his birthday in Khalifa’s first ever Premier League game against Arsenal.

During that game, Khalifa made headlines for calling out Gunners star Matteo Guendouzi as she tweeted: “F****** P***Y @MatteoGuendouzi.

Rice finds himself in a slightly unfamiliar role at left-back to accommodate Brighton‘s Mooy in the middle of the park.

Khalifa is a huge fan of the Aussie ace and last year named him alongside Zinedine Zidane and David Beckham in her top three players.

Compatriot Mat Ryan was named between the sticks with Manchester City love rat Kyle Walker at right-back courtesy of her interest in his large trainer collection.

Dan James made the squad despite Khalifa questioning his age and she plumped for a solid front two in Harry Kane and Mo Salah.

Teapot which almost went to a charity shop sells for £468,000 at auction

When is Emmerdale star Laura Norton’s baby due?

Burglar caught with broken leg after breaking in

Google down! Chaos for workers as Hangouts, Drive and Gmail stop...