In nearly every state in the US, black Americans represent a higher proportion of coronavirus deaths than they account for members of the population – yet black Americans are 27 percent less likely to get a vaccine against the virus than white or Hispanic Americans, new data reveals.

A Pew Research Center survey found that skepticism of doctors, treatments and vaccine is far more rampant in the black community than it is among white and Hispanic Americans.

That is particularly troubling to public health officials in light of the outsized toll the pandemic has taken on Black Americans.

The Pew survey doesn’t offer a direct explanation for these worrying discrepancies, but the medical field has a deep history of racism, and recent research suggests that black Americans still face frequent discrimination in the health system, in a variety of ways.

And it seems to have sowed deep distrust among black Americans. Only 35 percent of black people surveyed by Pew said they have great confidence in medical science, compared to 43 percent of white respondents. 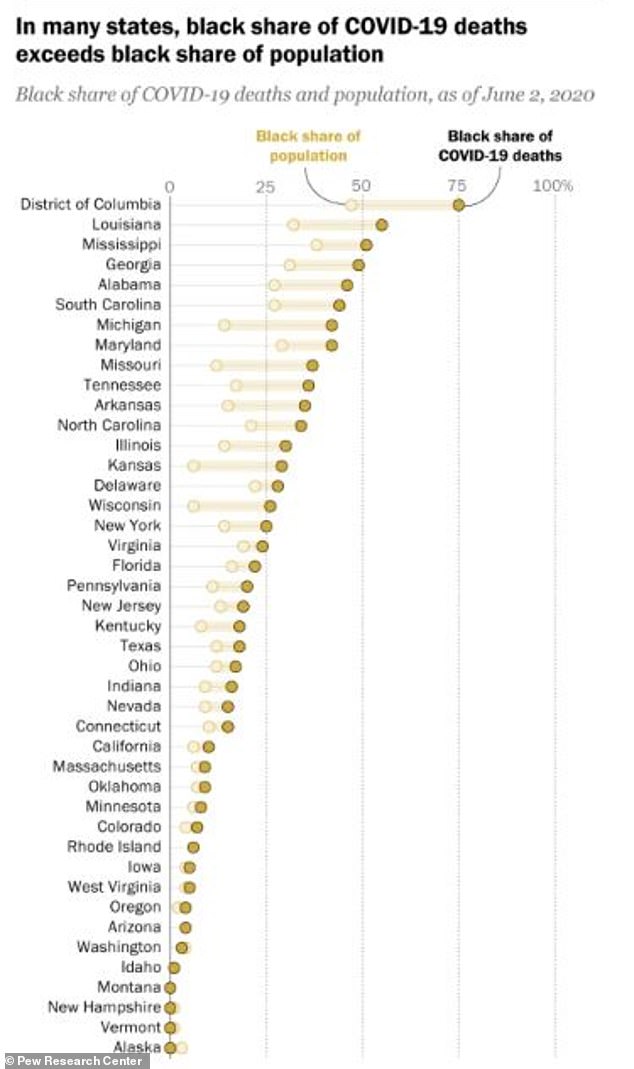 In eight states, the share of black coronavirus deaths is double the population of black citizens, yet only half of black Americans trust medical science enough to want a COVID-19 vaccine, a Pew Research Center survey revealed

According to the latest data from the Centers for Disease Control and Prevention (CDC), black Americans are hospitalized for coronavirus at 4.6 times the rate of white Americans.

About 13 percent of all Americans are back. But 24 percent of Americans who have died of coronavirus have been black, according to data from The COVID Tracking Project.

The Pew study reported disparities in almost every state, with particularly disproportionate death rates among black Americans in states in the South.

However, the most notable exception to that geographic trend is Washington DC, where 50 percent of the population is black, but 75 percent of coronavirus victims have been black.

Other states where rates of coronavirus deaths among black Americans are particularly out of whack with population demographics include: Louisiana, Mississippi, Georgia, Alabama, South Carolina, Michigan, Maryland and Missouri. 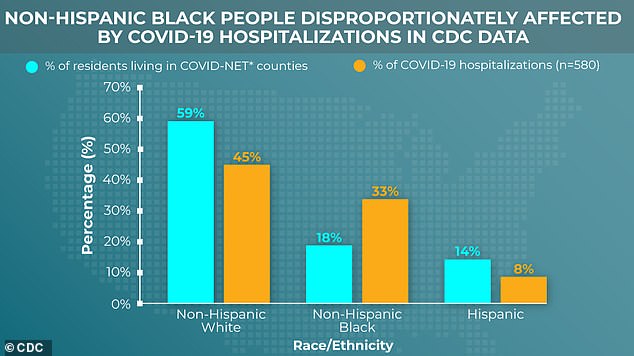 A graph from the CDC compares the populations of US counties by race to the proportion of coronavirus deaths in counties with cases. Black Americans make up a far larger share of deaths than they do of residents

This in turn raises their risks for contracting, becoming seriously ill or even dying from coronavirus infection.

Perhaps more importantly, black Americans make up a large portion of of service jobs – jobs many can’t miss for financial reasons any way, and which required them to continue being exposed to potentially infected people as ‘essential workers’ amid the pandemic.

Coronavirus’s devastation of black communities however, has not entirely overcome a historical distrust of medicine. 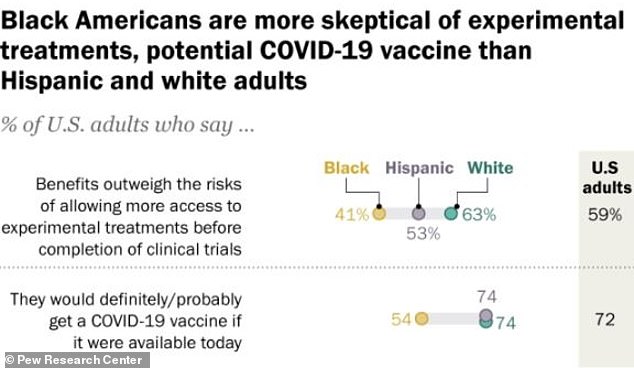 According to the Pew Center survey of nearly 11,000 adults, 35 percent of black Americans have ‘a great deal of confidence in medical scientists to act in the best interests of the public.’

By comparison, 43 percent of white Americans reported confidence in the motives of scientists, as did 45 percent of Hispanic Americans.

Nearly 19 percent fewer black Americans had a ‘mostly positive’ view of doctors than did white Americans.

Distrust stretches beyond the medical professionals themselves.

The majority – 57 percent – of black respondents said that experimental treatments ahead of large clinical trials (an occurrence becoming more common amid the pandemic) is not worth the risks.

Nearly three-quarters of Hispanics in the US say they would definitely get a coronavirus vaccine, but only 54 percent of black Americans are so sure. 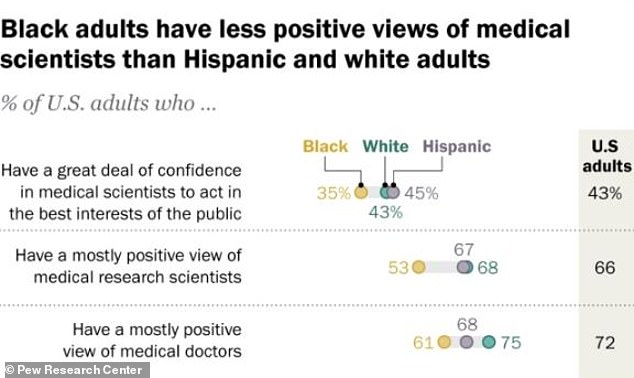 Only about a third of black Americans feel confident that medical scientists have their best interests at heart, compared to about 45 percent of Hispanics and 43 percent of whites

Experimental treatments and vaccines are widely considered the best hope for stemming or even ending the coronavirus pandemic.

Distrust in these measures could delay or block the conclusion of the international health crisis – but the skepticism is not unwarranted.

For one, the breakneck pace of research on two different potential treatments led to the near simultaneous retraction of two major studies on Thursday, prompting words of caution from the scientific community.

And for black Americans, the medical community has historically been abusive at its worst, and opportunist in many other instances.

Black Americans – especially black women – were the subjects of medical experiments that were praised as foundations of gynecology and practices, but were torturous to the people they were done on.

Both better access to health care in general and better practices in how black Americans are treated by the medical field may be necessary to ensure that the vulnerable group doesn’t continue to be disproportionately struck by coronavirus.

What did the Centers for Disease Control and Prevention say about Halloween this year?

Thinking of getting a Samsung Galaxy Note 20? You might want to think again

Two boys selling lemonade were robbed at gunpoint. Their community stepped in to help

Queen and Prince Philip jet off to Balmoral for summer break

What did the Centers for Disease Control and Prevention say about...

I hate to say it, but Ferrari's new convertible is worth...

How your COVID risk can be revealed by checking your skin...