UPSET about missing out on the warm cider, great music and mud as this week’s Glastonbury becomes another victim of the Covid-19 crisis?

Enter Legoland Windsor, which has recreated the Worthy Farm festival site out of more than 10,000 tiny bricks for a new display.

Legoland Windsor has recreated Glastonbury out of more than 10,000 tiny bricks for a new display[/caption]

Around 200,000 people would have been heading to Somerset for the 50th anniversary of the festival this year featuring headline acts including Sir Paul McCartney, Taylor Swift and Diana Ross on the main Pyramid Stage.

Instead, they can recreate the mood by enjoying Legoland’s version, complete with portable loos and mud.

The lego bricks even make up scores of revellers going wild in front of the iconic main stage.

And for the Lego figures that have had too much cider, the stone circle — also made out of Lego pieces — has been faithfully recreated.

Looking down over the party-goers’ paradise is the famous Glastonbury Tor — and there are even nearby fields with sheep.

Legoland Windsor hopes to re-open on July 4 and is in the process of creating a surprise project for families to welcome them back.

A spokesman said: “Glastonbury might be on hold for this year but families can still get into the festival spirit by creating their own Pyramid stage, headline artists and even miniature portable loos just like we created.” 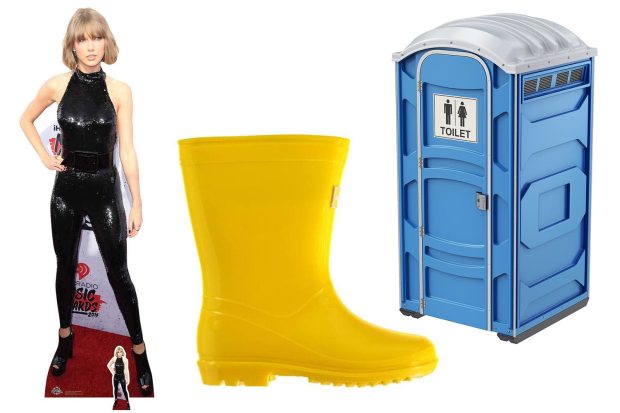 YOU can also create your own mini Garden Glasto – all for under £90.

While the singing might be a bit flat, use a £29.99 Taylor Swift cardboard cut-out from Amazon to headline.

Rain and Glastonbury go together like gin and tonic – so £4 wellies from Sports Direct are a must.

And you can even throw in some mud for free, using topsoil from second-hand website Preloved.

Many festival-goers will be vegetarian, so serve up £1.75 Morrisons meat-free burgers on a £2 disposal BBQ from Go Outdoors.

There is a fine tradition of people bringing huge flags – some help campers find their tents, some are works of art. Grab a 99p one from Partyrama to help you locate the way home.

There are more than 55,000 tents at the festival each year. You can bag one from B&M for £20. Abandoning it on your lawn is optional.

If you keep away from the shower for the weekend, then £1.49 sage incense sticks from The Psychic Tree may come in handy.

Brothers Cider at  £1.92 a bottle is also a festival staple.

And you can even pick up a portable loo for £27 a week at Jewson. But for the real Glasto experience, get all your neighbours to use it first.