GREGGS fans say they’re “heartbroken” as the bakery chain has reopened today but with a limited menu that doesn’t include favourites such as corned beef bakes.

Others can’t believe Belgian buns are off the menu, as are regional delicacies including stotties.

Greggs’ popular corned beef bakes are temporarily off the menu[/caption]

The high street bakery chain has reopened 800 branches for takeaway and delivery orders today, and it hopes to reopen its remaining 1,250 stores in the first few weeks of July.

But the vegan sausage roll connoisseur has reopened with a limited menu.

Fan favourites including steak bakes, sausage rolls, vegan sausage rolls and doughnuts are on the menu – see the box below for the full list – but others are disappointed to find their top treats have been chopped.

One person tweeted: “@GreggsOfficial will your South Wales branches be selling corned beef pasties when they reopen? They may as well stay closed if they don’t.” 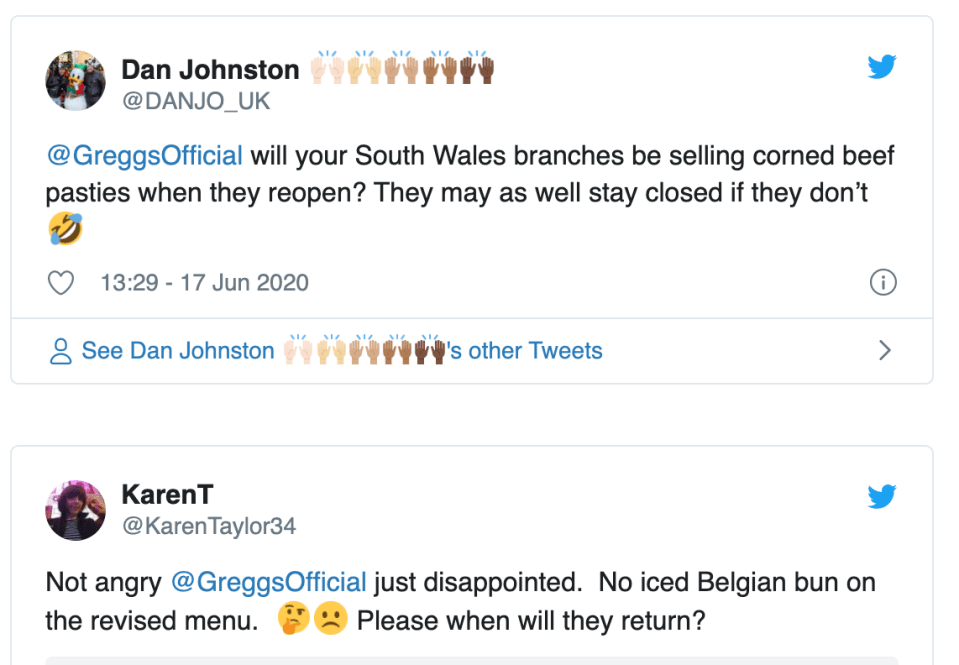 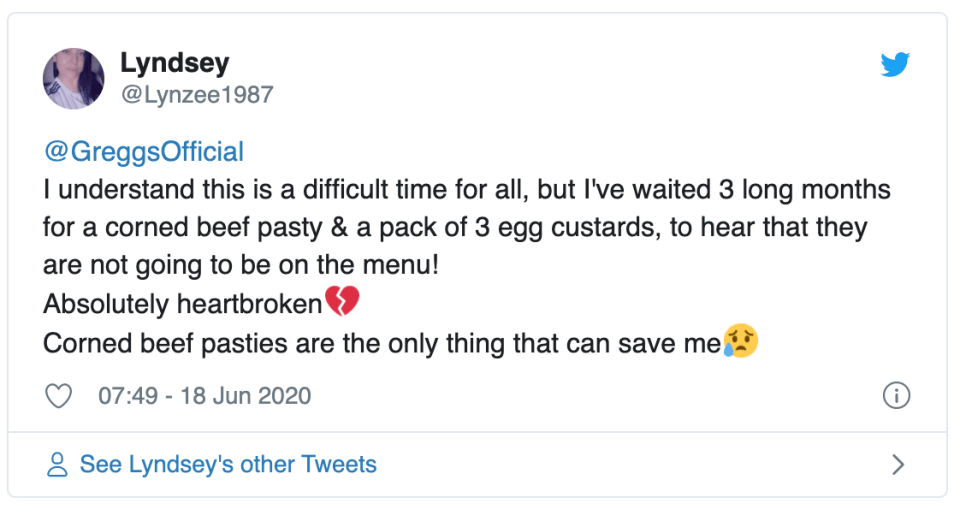 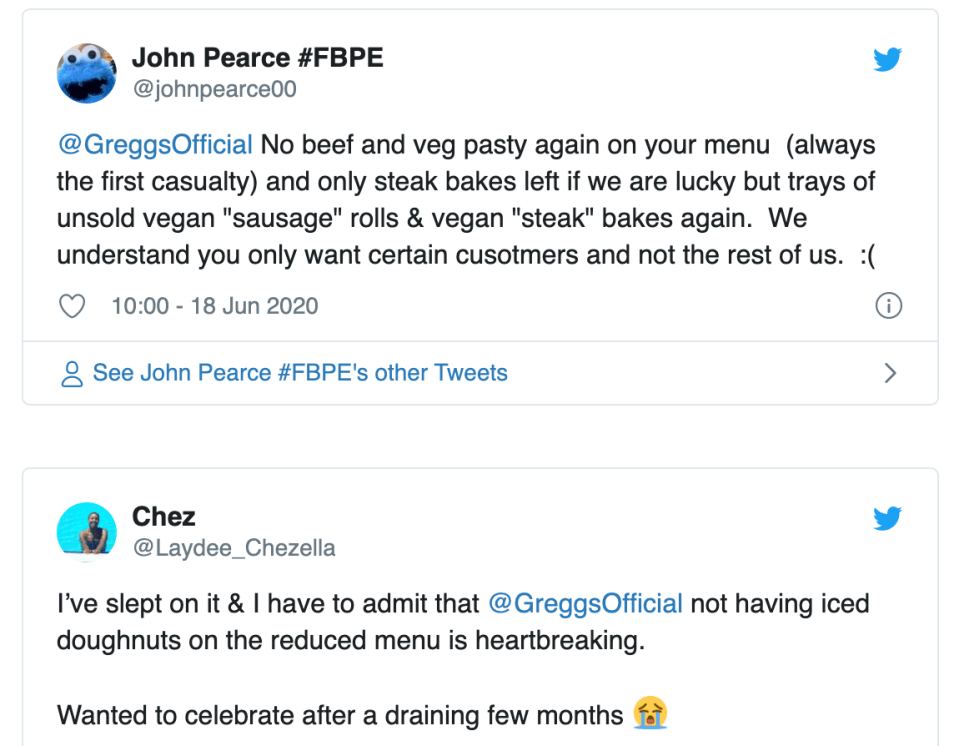 To which Greggs responded: “We’re sorry Dan, at the moment our Corned Beef Bakes aren’t part of our limited menu.”

Another corned beef pasty fan added: “@GreggsOfficial can I just ask are you taking away corned beef pasties cos why aren’t they on your menu? I’m gunna have a nervous disposition, do you understand what they mean to me?”

Someone else wrote: “@GreggsOfficial No beef and veg pasty again on your menu (always the first casualty) and only steak bakes left if we are lucky but trays of unsold vegan “sausage” rolls and vegan “steak” bakes again.”

And another person said: “Your Greggs favourites are back on the menu? Really??? STILL no potato and meat pasties, one of the long standing staples that made your company what it is today!!!”

What is included in Greggs' limited menu?

THE bakery chain is operating a limited menu to protect staff and customers from coronavirus.

Breakfast – served until 11am

But it’s not just savoury staples that have taken a hit, with some sweet snacks also missing.

One customer lamented the lack of egg custard tarts writing: “@GreggsOfficial I understand this is a difficult time for all, but I’ve waited three long months for a corned beef pasty and a pack of three egg custards, to hear that they are not going to be on the menu! Absolutely heartbroken.”

Another added: “Not angry @GreggsOfficial just disappointed. No iced Belgian buns on the revised menu.”

Someone else said: “I’ve slept on it and I have to admit that @GreggsOfficial not having iced doughnuts on the reduced menu is heartbreaking. Wanted to celebrate after a draining few months.”

Greggs’ 23 regional dishes have also been axed, much to the disapointment of one fan who tweeted: “Ham & Pease pud stottie isn’t back though.”

Stotties – springy sandwiches filled with in ham and pease pudding – are only available in Greggs stores in the North East of England.

It’s worth checking your local Iceland as it sells frozen versions of some Greggs items, including its popular corned beef bakes.

Greggs branches will also operate shorter opening hours, from 9am until 3pm, although this may vary depending on the store so it’s worth looking for your local opening hours using the store locator tool.


The full list of Greggs branches reopening today with times


Which fast food restaurants have reopened including McDonald’s and Nando’s?

ROLL UP, ROLL UP


BA, Greggs and Rolls-Royce among firms to take £15.6bn in coronavirus loans

McDonald’s fans were similarly, left “heartbroken” to find the restaurant was running a reduced menu at reopened branches.

But the fast-food chain says its popular breakfast menu will be trialled in some stores from June 24.

Woman charged after attempting to neuter her dog