GAVIN Williamson has said the Government is looking at creating larger teaching “bubbles” to allow class sizes to expand in time for the autumn term.

The Education Secretary, 43, indicated the current class size under the coronavirus restrictions could be doubled allowing all school kids to return to classes following the summer holiday.

In his Downing Street briefing he said: “We’ve been creating bubbles of children in the classroom, creating a protective environment for those children.

“Currently that is at 15, what we would be looking at doing is expanding those bubbles to include the whole class.”

He said signs the virus was reducing meant ministers could look at “making sure every child returns to school”.

Mr Williamson added: “We recognise there is still going to have to be protective measures put in place to make sure children are safe and make sure that teachers and all those who work in school are safe as well, and that is why we are going to be issuing further guidance in the next two weeks.”

Earlier today Prime Minister Boris Johnson has said it is his intention that children of all ages in England should be able to return to school on a five-day-a-week basis in September.

The Prime Minister has said to “watch this space” when asked whether social distancing restrictions could be reduced from two metres to one metre to help schools in England return in autumn.

Speaking to broadcasters during a Hertfordshire school visit on Friday, Mr Johnson said it was “absolutely” his aspiration that pupils of all ages will be back in the classroom for a full five days a week in September.

“I want a world in which, as far as possible, provided we can make classrooms safe, and I think we can, I want every child, every pupil, every student, back in September. I’m sure we can get it done,” Mr Johnson said.

His comments came as the Government’s £1 billion plan to help pupils catch up with learning came under fire from education leaders.

Head teachers say they were not consulted on the details of the scheme, which will see the most disadvantaged children in England given access to funds to pay for tutors while the majority of the funding will be shared across schools to help pupils from all backgrounds affected by the lockdown.

College and nursery leaders have criticised the Government for leaving their pupils out after it announced that £650 million would only be given to state primary and secondary schools for the 2020-21 academic year.

I want a world in which, as far as possible, provided we can make classrooms safe, and I think we can, I want every child, every pupil, every student, back in September

A further £350 million will be spent on a one-year subsidised national tutoring programme targeted at the most disadvantaged pupils in schools.

Education leaders say the funding will not reach young children in nurseries and college students who are most “in need of support” amid the pandemic.

On the Prime Minister’s ambition to return all pupils to schools for five days a week in autumn, Geoff Barton, general secretary of the Association of School and College Leaders (ASCL), said schools and colleges were trying to prepare for September amid an “information black hole” from the Government.

Mr Barton said school and college leaders are preparing for two scenarios for the autumn – using rotas to stagger the return of pupils or bringing students back full-time – amid an “absence of information”.

It came as the UK’s chief medical officers agreed to downgrade the coronavirus alert level from four to three after a “steady” and continuing decrease in cases in all four nations.

Localised outbreaks of Covid-19 are still “likely” to occur, the advisers warned, and the virus remains in general circulation.


UK's top 10 benefit hotspots revealed – where does your hometown rank?

But the downgrading – recommended by the Joint Biosecurity Centre (JBC) – means transmission of coronavirus is no longer considered to be “high or rising exponentially”.

Mr Johnson said moving to a lower alert level would allow the Government to “start making some progress” on the current social distancing measures and promised new guidance for the hospitality sector and businesses “very shortly” – an indication that restrictions could soon be reduced.

Government scientific advisers have said they would be comfortable with a reduced distance if risk mitigating measures were taken, such as people sitting side by side and wearing face coverings. 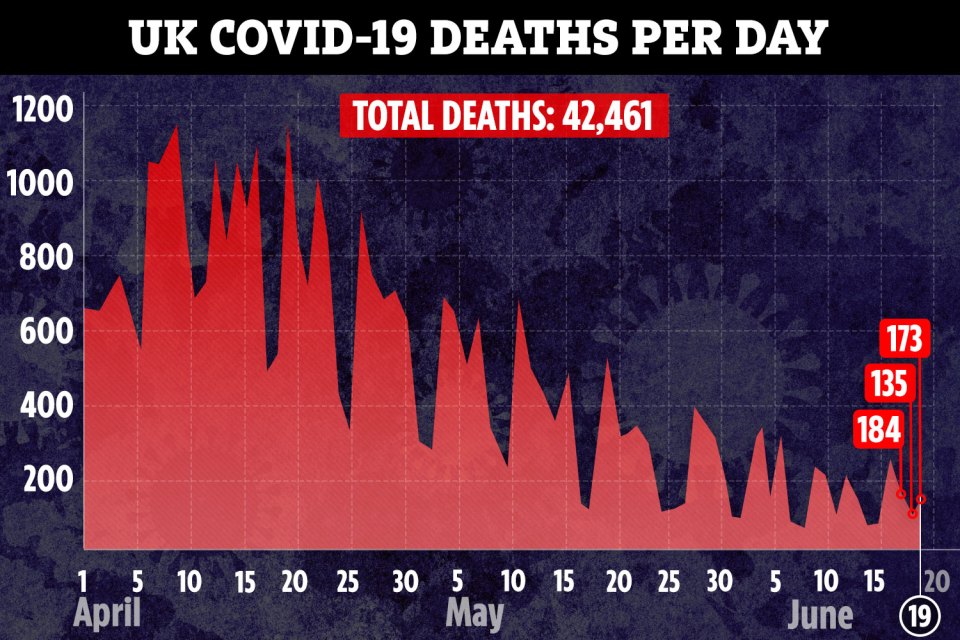 Meghan Markle 'fish out of water' as Harry 'takes lead' at latest outing –...

Pervert, 58, spent Christmas sexually assaulting a pit bull as his girlfriend filmed him

Trump ballots ‘thrown in the GARBAGE’ by temporary worker as president...