“I was shaking all over and really dizzy, and I thought: ‘I’ll just jump in front of the next train’,” she says. “I had this overwhelming need to make everything stop.”

Harry Potter author JK Rowling, 55, was accused of being transphobic after questioning use the phrase ‘people who menstruate’ rather than the word ‘women’[/caption]

It was March 2015, and in three and a half years Sarah Jane had gone from being a bubbly kids’ TV star to an unemployed social outcast – all because she posed for a few sexy photos, including one for a campaign with animal rights organisation PETA.

Following an online furore and vicious abuse over the picture, she was axed from her job as a presenter on CBeebies and disowned by close colleagues.

“My whole life got shut down,” Sarah Jane tells Fabulous. “There was no empathy, no compassion. It’s shocking how unforgiving the world was.”

Thankfully, because she was in the early stages of pregnancy on that grim day at the station, Sarah Jane pulled back from the brink and walked away.

Now aged 46 and a happily married mum to sons Phoenix, four, and Indiana, two, Sarah Jane – one of the first victims of modern cancel culture – has not worked in TV since.

Currently making headlines across the world, cancel culture is described as the moment when the masses “swarm” on an individual after taking offence to their actions or words.

To ‘cancel’ in today’s lingo means to remove people and cultural products from consumption and popular conversation. This is done in light of actions that are believed to make them unworthy of praise or critique,” explains Dr Tina Sikka, a media lecturer at Newcastle University.

Several high-profile figures have encountered this treatment in recent weeks, including Harry Potter author JK Rowling, 55, who was accused of transphobia in June.

Following a series of tweets and an essay in which she questioned the use of the phrase “people who menstruate” rather than the word “women”, there were furious calls to boycott her books, and she also received shocking rape and death threats.

The writer – whose views were even criticised by Harry Potter stars Emma Watson and Daniel Radcliffe – later signed an open letter denouncing cancel culture. Co-signed by 150 other big-name writers including Margaret Atwood and Salman Rushdie, the letter slammed the “vogue for public shaming and ostracism,” and added: “The free exchange of information and ideas, the lifeblood of a liberal society, is daily becoming more constricted.”

In July, Killing Eve actress Jodie Comer, 27, was also targeted, after being romantically linked to James Burke, a Republican Donald Trump supporter. The hashtag #JodieComerIsOverParty promptly began trending on Twitter, with critics posting comments such as “shame on you” and “you disgusting piece of s**t.”

Having previously spoken of the misery of daily trolling, the BAFTA-winning star announced she has taken “a step back” from all social media.

Taylor Swift was another of the early casualties, following her feud with Kim Kardashian West in 2016. The hashtag #TaylorSwiftIsOverParty went viral, while the 30-year-old singer has frequently spoken of the effects of mass public shaming.

“I don’t think there are that many people who can actually understand what it’s like to have millions of people hate you very loudly,” she has said.

“When you say someone is cancelled, it’s not a TV show. It’s a human being. You’re sending mass amounts of messaging to this person to either shut up, disappear, or it could also be perceived as: ‘kill yourself’.” 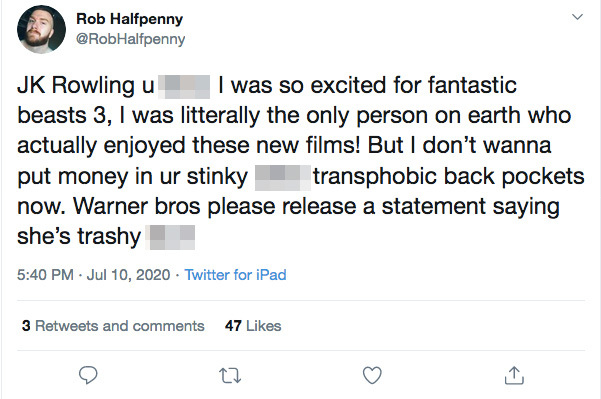 According to psychologist Dr Becky Spelman, our social media addiction is largely to blame for the upsurge in cancel culture, because online everything is dangerously black or white.

“Most of us default to the most extreme version of our views on social media,” she explains. “There is little room for nuance when word counts are limited,

and there’s a culture of responding immediately to anything provocative. In a face-to-face conversation people are more likely to speak in a calm and considered way, whereas everything on the internet tends to be a soundbite.” 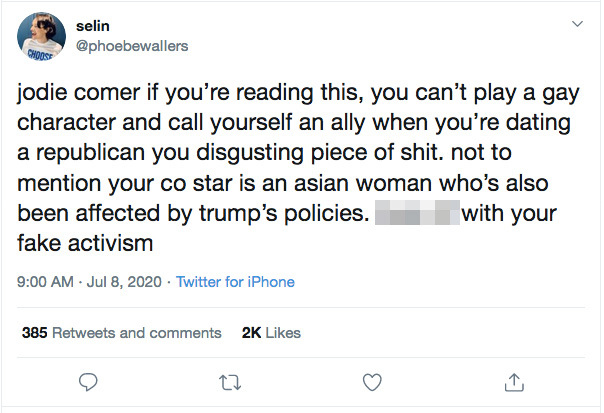 Dr Huw Davies from the Oxford Internet Institute agrees social media invites angry reaction in the same way cars facilitate road rage. “We only see the behaviour, not the person. We don’t see the consequences of our actions,” he says. He also believes that many view cancel culture as a fast-track to fame. “Winding people up on social media boosts engagement through retweets and likes.”

But for those on the receiving end of cancellation, there can be professional consequences. In July, Scottish children’s author Gillian Philip – who wrote many of the Rebel Angels series – was sacked after backing JK Rowling’s views.

Speaking to Fabulous, Gillian, 56, a mother of grown-up twins, says she has steered clear of controversial debate in the past for fear of the fallout. “But as JK Rowling was abused and betrayed by people whose careers she’d made, I realised I couldn’t stand back any more. I added #IStandWithJKRowling to my Twitter profile, and it was like blood in the water – the sharks descended.”

Just like the Harry Potter author, she received dozens of explicit messages, and things got worse when the fiction company she wrote for announced they would not work with her again.

“They were unhappy with my opinions. I was bemused by that, because I’d been restrained in the face of vile abuse,” she says. “It’s worrying that corporations, charities and the government are so terrified of Twitter mobs.”

Among the less abhorrent insults, Gillian was called a “b***h with crabs” and a “nasty ass transphobe.” She says: “It was awful to be the target of such hate – let alone lose my job for it. Blocking and muting didn’t work – trolls have multiple accounts.”

Being publicly hounded was doubly difficult since Gillian’s husband Ian passed away this May, aged 83, after a lengthy illness. “I’ve had a tough couple of years, and it’s terrifying to think how this could affect someone less resilient. I tried not to take the death threats seriously, but the irrational hate was unnerving. My kids had just lost their dad, and it was nasty to see how many people wanted their mother to die, too.”

While she is taking some time out before exploring new writing options, Gillian has no qualms about her decision to stand with JK. “I don’t regret it. Not one bit. There’s a point where you have to speak out, or it would be impossible to live with yourself.”

“Ordinary” people are not immune, either.

The photos were taken on a flight from Gatwick to Poland, and she criticised their “too-tight uniform, double chin, rotten and uneven teeth and messy hairstyle.”

Although Katarzyna later apologised, LOT said it was “unacceptable” and cut ties – but she received so much public abuse that it affected her mental health.

Meanwhile, 19-year-old Tesco worker Jade Pinner from Essex found herself cancelled when she recorded a TikTok video of herself ranting about hard-to-please shoppers.

After posting the clip – in which she jokingly screamed and punched the air – in April 2019, she was bombarded with comments, including accusations that she was a “dirty, uncivilised thing,” “disgusting” and “mentally unstable,” which forced her to deactivate her Facebook account.

Some, like Sarah Jane, find no way back after being cancelled.

Having started out as a CBBC presenter in 2002 on shows such as Higgledy House and Mighty Mites, she was adored by youngsters – until she appeared in the PETA campaign, lying topless on a giant plate of food.

“I kept my hands over my breasts, and didn’t think it was a big deal. But because of my job, it blew up,” she says.

“I’m committed to animal rights and I thought: ‘If I’m going to do it, I might as well do it properly and get PETA as much publicity as possible.’ Looking back, it wasn’t a great idea given my work as a children’s presenter, but it was still devastating to lose a job I loved over an error of judgement.

“People tweeted me saying I deserved to be fired, and that I was talentless. Mums on Facebook were the worst – saying how much they’d always hated me. It was horrible. The social media generation are like the crowds who used to cheer as women were burned alive or hanged.”

Despite a 10-year working relationship with the BBC, she never heard from her bosses again.

She says she was especially hurt when her CBBC co-star Justin Fletcher – AKA Mr Tumble – cut all contact with her.

“I called and left him a message, but he never rang back. That was so upsetting, because we had been best buddies. It seems to be OK for men in the spotlight to make mistakes, but women get pummelled for wearing the wrong lipstick.”

Sarah Jane’s attempts to resurrect her TV career came to nothing.

“I sent hundreds of emails seeking work, but nobody would see me. I was desperate – I’d lost my career and my whole identity. I ended up racking up £100,000 of credit card debt and moved into the garage at my mum and dad’s house.”

Her situation was not helped when, in 2013, she spoke publicly about her long-term use of Prozac for depression, and also admitted taking cocaine in her youth. “I was trying to warn young people off illegal drugs, but it backfired. I had people calling me a druggie and scuzzy, despite having not touched drugs for 14 years.”

As she sought to rebuild her life, she and ex-Hollyoaks actor Ayden Callaghan, now 39, got engaged in November 2014, having met the year before. “That prompted his young fans to attack me on Twitter, calling me ugly, old and disgusting – just because I’m seven years older.”

Ayden proved a major lifeline, however.

“He stood by me through everything. He took on all my debts, paid for my car and put up with my neverending moods.”

When Sarah Jane became pregnant in early 2015, she stopped taking Prozac after consulting with her GP.

“Withdrawal left me an emotional wreck,” she says. Desperate to escape the house while Ayden was working, she headed for Liverpool city centre.

“By the time I got to Aigburth station near our then home, I was overwhelmed by anxiety. Standing on the platform edge, I was compelled to jump. But I realised it wouldn’t just be me jumping, so I turned away and sat on a wall until I was calmer. Being pregnant saved me.” She felt unable to seek help over the incident.

“I feared people would think I was crazy and take my baby when he was born.”

When he arrived that August, she and Ayden called him Phoenix – as “he rose out of what felt like the ashes of my life.”

Their son Indiana was born in January 2018, and Sarah Jane now runs the Curious Theatre School near their Lincoln home. “I still miss working in telly, of course. But my boys are everything I need. I use social media, but I’m much more wary these days.”

But as concerns about the destructive nature of cancel culture escalate, the call for more rational and measured action and debate is gaining traction. “There’s always room for mutual respect and dialogue,” Becky says.

Most read in Fabulous

“We share the world with millions of people and disagree on millions of issues. And sometimes, people also make mistakes. We shouldn’t have to always agree with each other in order to respect one another.”

And as someone who nearly lost her life because of being cancelled, Sarah Jane believes change is urgently needed.

“There must be a better way than everyone jumping on a person, willing them to lose their job or disappear. We all need to go easier on each other, because there is always a fragile human being in the middle of the storm.”

Robbie Williams reveals he is dyslexic when it comes to numbers