Thousands of Americans left their homes and took to the streets to protest across the country after the death of George Floyd.

The 46-year-old black man died in Minneapolis, Minnesota, on Memorial Day after a white police officer arrested him for allegedly using a counterfeit $20 and knelt on his neck for eight minutes while Floyd gasped: ‘I cant’ breathe!’

With demonstrations taking place in Los Angeles, New York City and Washington, DC, there are concerns that the mass gatherings could trigger a second wave of coronavirus infections.

Many protestors have been seen ignoring social distancing guidelines and not wearing protective gear such as masks.

However, one expert has warned that the shouting and running around that occurs at many demonstrations could lead to even greater virus transmission. 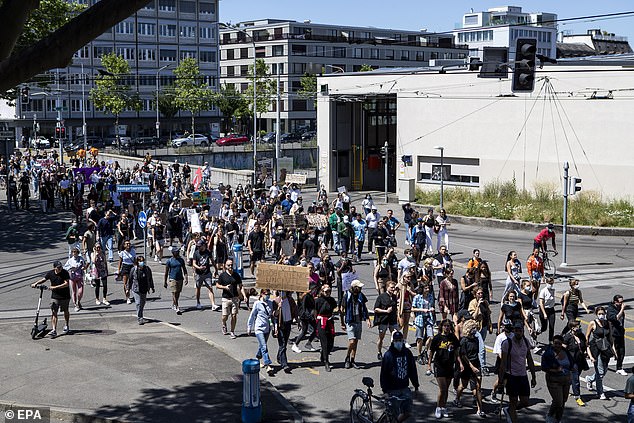 Experts say not following social distancing guidelines and not wearing masks at protests over George Floyd’s death could increase the risk of coronavirus transmission. Pictured: Activists take part in a Black Lives Matter protest after the Floyd’s death, June 1 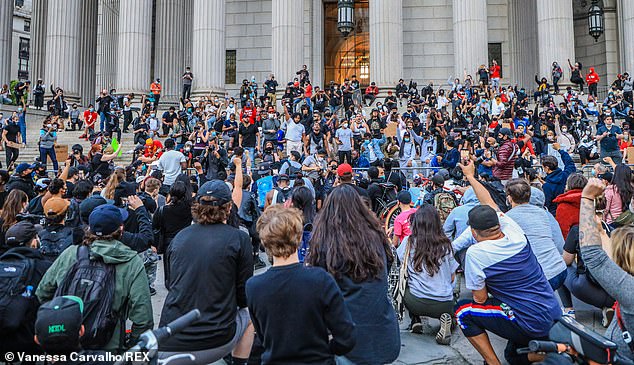 Shouting and running around could raise the risk of infected droplets being spewed into the air and others inhaling them. Pictured: Demonstrators during a protest in New York, May 31

Dr William Schaffner, a professor of preventive medicine and infectious diseases at the Vanderbilt University Medical Center, told DailyMail.com there are several reasons one may become infected at a protest.

There’s the fact that demonstrations are large congregant events – which are currently discouraged – a lack of social distancing and people not wearing masks.

However, he adds that a lot of shouting is also likely to increase the risk of virus spread.

‘There is a lot of shouting and running around, which is exertional, which will make people breathe more deeply and exhale more,’ Schaffner said.

This means more potentially infected droplets in the air and a greater chance of a non-infected person breathing them in and falling ill.

Additionally, many people attending these protests are people of color, minorities who have been disproportionately affected by COVID.

‘That puts those populations at greater risk and those people can bring the virus  home with them,’ Schaffner said.

‘There’s no doubt that we are concerned that this may contribute to spikes of increased infections here and there because it comes at the time when we are all “opening our society” as we are going out.’

On Saturday, in Los Angeles, Mayor Eric Garcetti, warned the protests could become ‘super-spreading events’ if people don’t practice social distancing or take other preventive measures such as wearing masks.

These events occur when a single person, who sheds a great deal of the virus for unknown reasons, infects several people at one time.

Schaffner says there have been ‘super-spreading’ events during the pandemic after large groups of people have come together.

One example is in South Korea, where a woman went to China, came back infected and then attended a large event at her church.

‘There was a huge are gathering at this religious service where social distancing was not observed even though it was already recommended,’ he said.

‘And she was indeed a super-spreader and spread it to a large number of people, creating the first major introduction of COVID into South Korea.’ 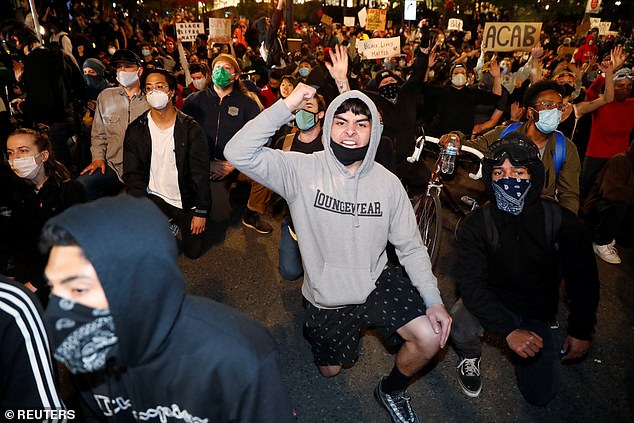 Shouting and running around could raise the risk of infected droplets being spewed into the air and others inhaling them. Pictured: Protesters rally against the death of George Floyd in Portland, Oregon, May 31 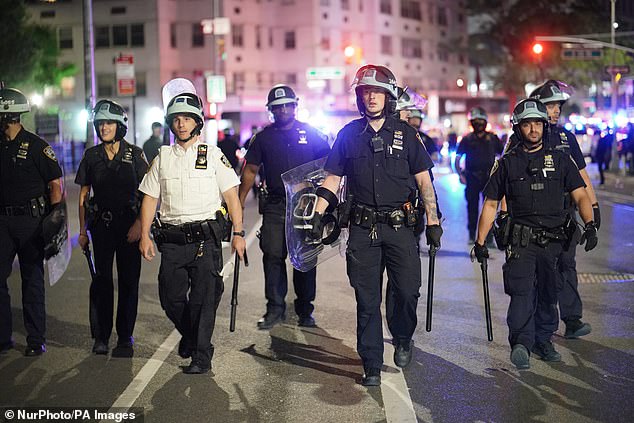 One expert fears the distrust in authority after Floyd’s death will also lead to a distrust in health authorities who are contact tracing. Pictured: NYPD anti-riot police are seen preparing to disperse protestors, May 31

In another instance in Washington state, after someone ill attended choir practice, 52 of the 61 people there became sick.

According to Skagit County Public Health, 32 were confirmed to have COVID-19 and 20 had symptoms consistent with the virus.

Schaffner says a super-spreader might not know they’re infected and think their coughing is from the protest.

‘If you suddenly start coughing, and you’ve been exposed to tear gas and pepper spray, you may just ascribe your cough to those kinds of exposures rather than attributing them to perhaps COVID infection,’ he said.

‘So they could easily put themselves in a position where they infect a large number of people.’ 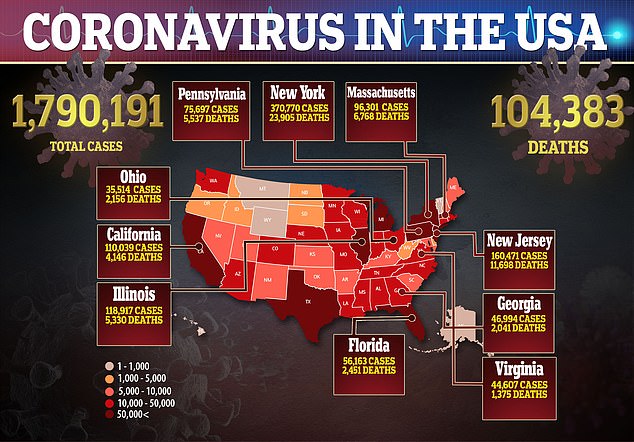 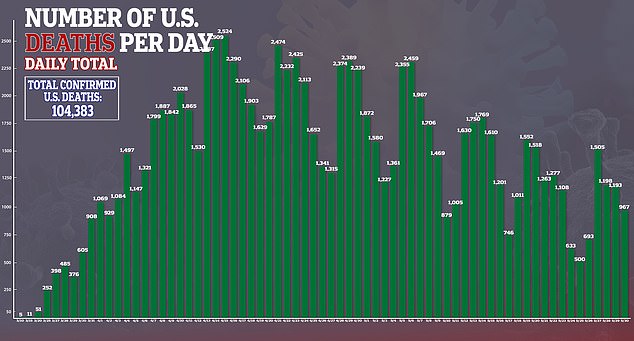 He also fears than an unintended consequence of Floyd’s death and the protests will be a distrust of authorities that spills into contact tracing.

Contact tracing is considered to be one of the most important measures needed to safely reopen the economy.

All COVID-19 positive patients are asked to remember everyone they came into contact with while possibly contagious, and then those people are asked to self-quarantine for two weeks.

‘Contact tracing only works if there is trust,’ Schaffner explained.

‘A total stranger calls you up, you’re positive, explains they’re from the health department, wants to contact everyone with whom you’ve had contact with in the previous week.

‘Unless you trust that person and believe that they were trying do good for your community and your friends, you won’t give up that information.

Schaffner says ‘if one wishes to demonstrate’, remember to socially distance from others, always wear a mask covering the nose and mouth and bring hand sanitizer.

He also advises to go home during the evening.

‘Because it would appear that all the rambunctiousness occurs once it gets dark and obviously with all the running around and congregating then, that’s when the risk increases,’ he added. 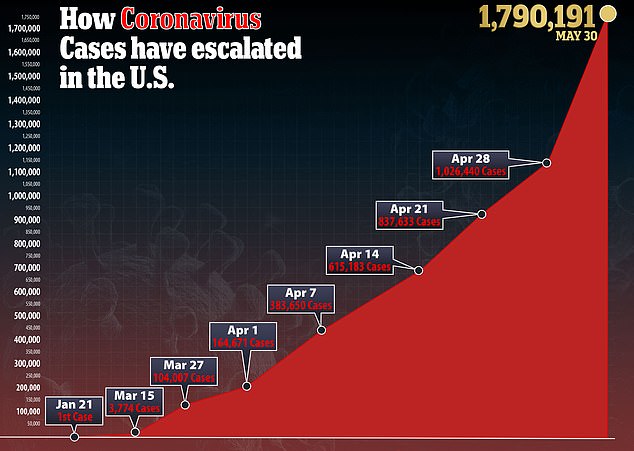 Away on Netflix cast: Who plays Ram Arya in Away? Meet actor Ray Panthaki

Coronavirus: Why infection attacks some organs and not others

The Body Shop will buy 600 tons of waste plastic next...