EASTENDERS fans have lost the plot as they’ve been taken back in time with a classic episode from Albert Square in 2008.

Viewers shared their appreciation for the ‘iconic’ episode on Twitter as they praised the soap’s former magic while watching Frank Butcher’s funeral.

Watching on BBC4 from yesteryear, fans were delighted as they watched the vintage re-run from the era of Pat Butcher, Frank and Peggy Mitchell.

One delighted fan wrote on social media: “It’s 2am and I’m sat here being all nostalgic because 2008 EastEnders is on the telly.”

A thrilled viewer wrote: “Oh my days 2008 having a flashback to young Sharon singing at Pat and Frank‘s wedding iconic.”

Another praised: “Get outta my pub! God I’ve missed hearing Peggy saying that.” 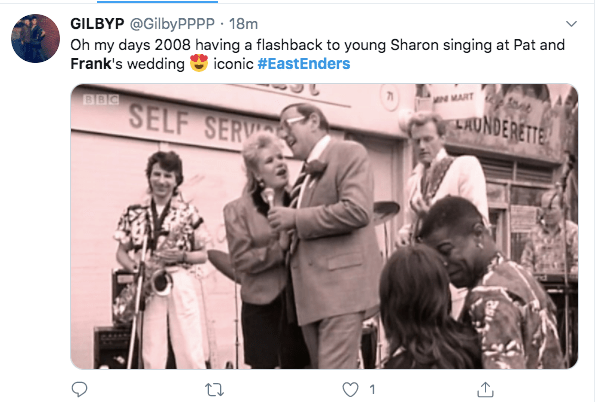 Another penned: “I miss every character in this episode.”

Others commented, writing things including ‘iconic’, ‘Pat and Peggy scenes, I miss them a lot,’ ‘God, I’ve missed the old classic episodes’.

One fan posted a picture of Frank in his infamous naked bow tie scene and commented: “Aww that bow tie that was one of my favourite Frank scenes.” 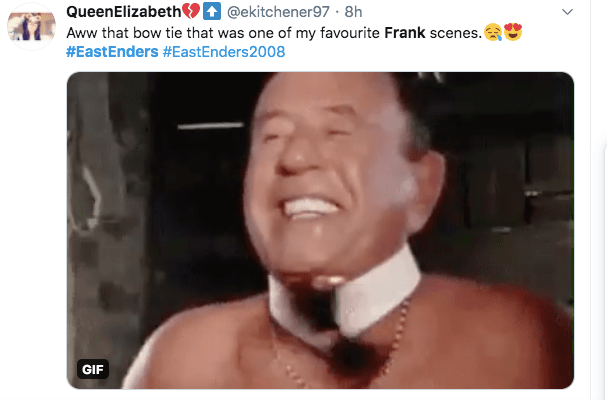 EastEnders have confirmed that the classic episodes, which will be shown every Tuesday evening in EastEnders’ slot, will also include Sharongate and the explosive reveal of Max and Stacey’s affair.

Fans can also take a trip down memory lane by watching other old episodes from 2008 on BBC iPlayer.

Viewers will be able to get stuck into four episodes a week from tonight. 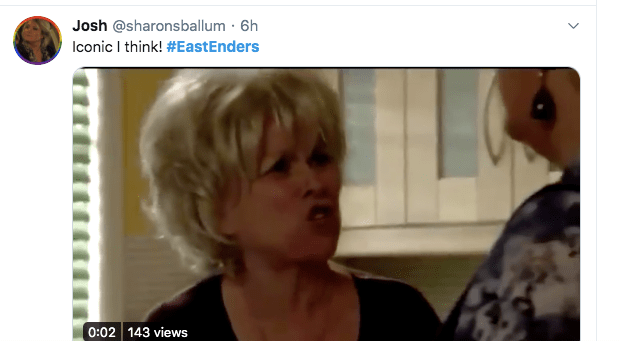 BBC One will be airing the most-watched episode of any UK soap ever, which saw Den Watts get some sweet revenge after discovering his wife Angie had lied about having a terminal illness.

In what has to be one of the most iconic soap moments of all time, Dirty Den brutally served Angie divorce papers on Christmas Day.

Originally airing back in 1986, the episode saw over 30 million viewers in the UK tune in to watch the drama. 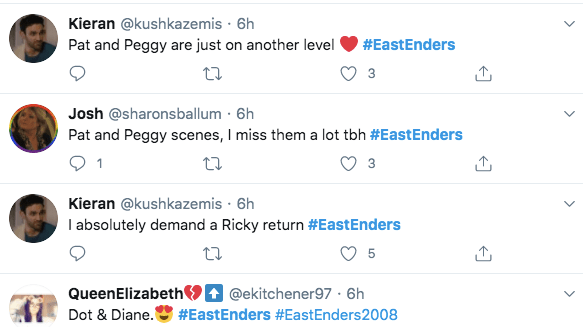 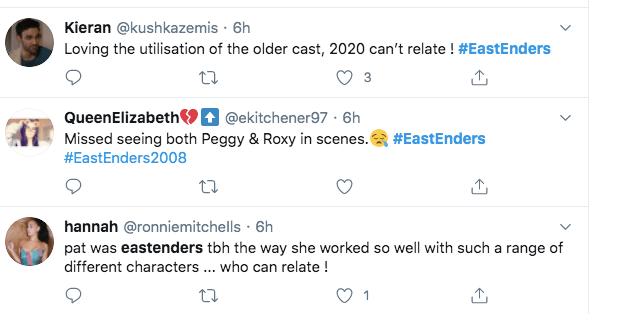 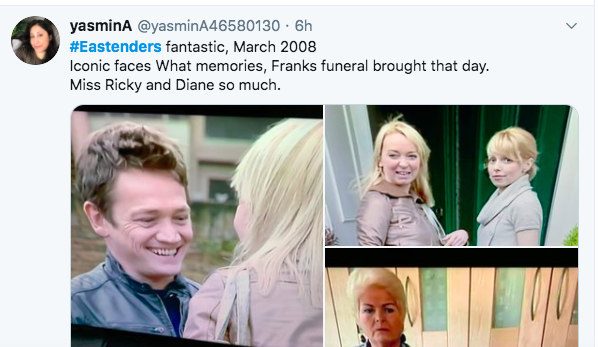 The soap has gone off air for the first time in its 35-year history after running out of episodes due to the coronavirus pandemic.

The soap’s finale ended with some whopping cliffhangers left unresolved as Sharon and Ian swooped in to steal the Vic from Phil.

Earlier this month, a show insider suggested that the soap may not return until September. 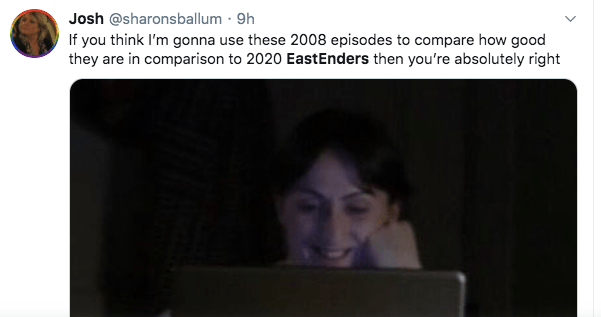 EastEnders star Dayle Hudson may have inadvertently confirmed that the soap won’t be returning until September by sharing new scripts on his Instagram page, one of which had a transmission date which read September 8.

EastEnders episodes will be 20 minutes long when the show returns instead of the usual half-hour.

Social distancing restrictions means the running time has been slashed, but soap bosses have confirmed the show will still air four times a week.

Along with the old episodes, BBC One will also be airing spin-off series Secrets From the Square.

Hosted by Stacey Dooley, the series will kick off tonight at 8pm and will offer viewers a unique chance to get a sneak peek into life behind the scenes.


Abbey Clancy says drinking during lockdown has aged her 10 years

EastEnders fan Stacey said of her new hosting role: “I’m delighted to be hosting Secrets From the Square.

I grew up watching EastEnders, so walking on to Albert Square was a surreal experience as well as taking a trip down memory lane and interviewing some of the legends of Walford has been great, I’ve loved every minute of it!”

Parents ‘putting their children at risk of burning and skin cancer by failing to...