Relying solely on social distancing could lead to a second surge of coronavirus that kills more people and lasts twice as long as the first, a study suggests.

Modelling by a mathematician found easing lockdown by 50 per cent would cause cases to spike to around 350,000 a day by August.

Dr David Glass, of Ulster University in Northern Ireland, likened a 50 per cent easing in restrictions to the measures seen in the UK a week before lockdown.

Dr Glass said reverting to this level of preventative measures would be ‘disastrous’ and could lead to around 75,000 more deaths in a second wave that lasts twice as long as the first.

He claimed the UK’s current loosening of lockdown would keep cases falling but any further easing may cause cases to creep back up.

Dr Glass told MailOnline: ‘I don’t think we need to reintroduce more restrictions but I think the scope for further relaxations is very limited at the moment.’

He said the current measures in Britain equate to about a 10 per cent easing of the full-scale lockdown enforced on March 23. 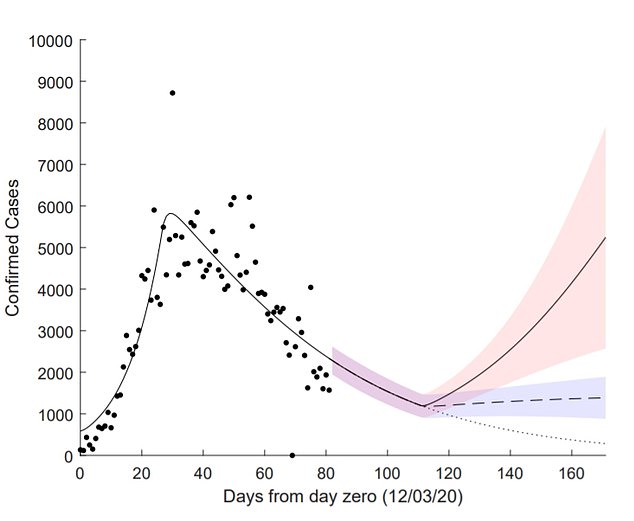 The effect on the daily number of confirmed cases (hospital numbers for the UK) of keeping the lockdown fully in place (fine dotted line), relaxing it by 25% (dotted line) and relaxing it by 50% ( black line). Shaded regions represent 95 per cent confidence intervals. In each case the relaxation is assumed to take effect by June 30

The model is based on the assumption easing lockdown by 50 per cent will directly increase the reproduction ‘R’ value of coronavirus by 50 per cent.

R represents the average number of people an infected patient passes the disease onto, and keeping it below 1 is key to containing its spread.

Dr Glass estimates the UK’s R value was hovering at around 2 before lockdown and has since fallen to 0.9 – which he says is ‘higher than would have been hoped’. 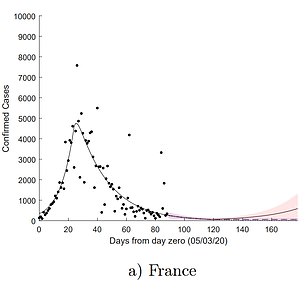 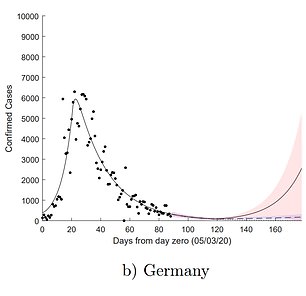 Dr Glass also modelled the effect of easing lockdown in four other European countries – including France (left) and Germany (right). He estimates the R in these countries is 0.66 and so a second wave would take longer to hit 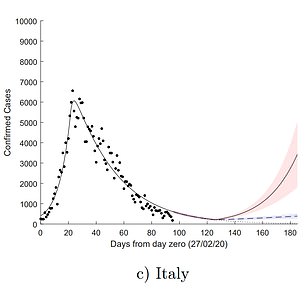 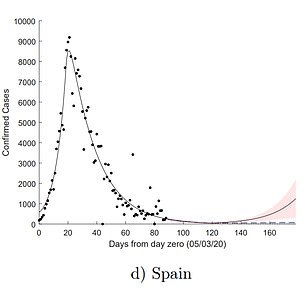 Italy would be the second worst-hit country after the UK because its R is sitting at 0.88, his model predicted (left). Spain’s R is thought to be in the region of 0.7

Britain’s coronavirus outbreak may have been under control before lockdown was enforced, according to a study that throws into question whether the draconian measures were ever needed.

Data modelling by a mathematician at Bristol University suggests the spread of Covid-19 throughout the UK had peaked days before Boris Johnson introduced the unprecedented curbs.

The calculation is based on a growing body of data that indicates the average Covid-19 victim dies 23 days after being infected.

The darkest days in the UK’s outbreak were on April 8 and 9, when more than 2,000 people passed away from the virus, official figures show.

Professor Simon Wood believes most of these patients were infected between March 18 and 19 – 23 days earlier – and five days before the country locked down.

He claims that banning large gatherings and telling people to keep two metres apart  would have been sufficient to keep the virus under control.

The study throws into question whether Britain’s lockdown was needed amid claims social distancing policies announced on March 16 curbed the crisis on their own.

The mathematician predicts that easing lockdown by half would result in the UK’s R rising to at least 1.4, which would cause cases to increase exponentially.

For example an R rate of 1.4 would mean every 10 people who became infected would pass the virus onto 14 more people. Those 14 would, in turn, infect 20 people who would then pass the disease on to more than 27, and so on.

The true number of daily infections at the height of Britain’s crisis is unknown because of a lack of widespread testing.

Swabs were reserved for only the very sickest Covid-19 hospital patients until May, when the epidemic was already on a downward spin.

Official records show cases peaked on April 11, when 8,700 people were diagnosed with the viral disease in 24 hours.

But estimates by Public Health England and Cambridge University researchers suggest 360,000 Britons were infected in a single day on March 23 in England alone.

Dr Glass’ study, which has not yet been published in a scientific journal or reviewed by other scientists, claims cases would soar to this level by August if lockdown was eased by 50 per cent on June 30.

Left unchecked, the disease would race through the population once again and kill another 75,000, he claims.

But Dr Glass concedes this would be unlikely to happen because the UK government would revert back to lockdown before the crisis could spiral back out of control.

Writing in the paper, he said: ‘The model was used to investigate potential consequences of relaxing the lockdowns towards the end of June.

‘The results indicate that there is a substantial difference between 25 per cent and 50 per cent relaxations.’

Dr Glass did not reveal what a relaxation scenario might look like if lockdown was loosened by 25 per cent.

He continued: ‘The results suggest that the latter would be disastrous and could lead to a second peak that is higher and lasts longer than the earlier peak in each country, if no further measures were put in place.

‘While the former would not be so serious, it would halt the decline in numbers. A relaxation of around 10-15 per cent, which translates into the level of interactions within society, would be recommended if numbers are to continue to decline.’ 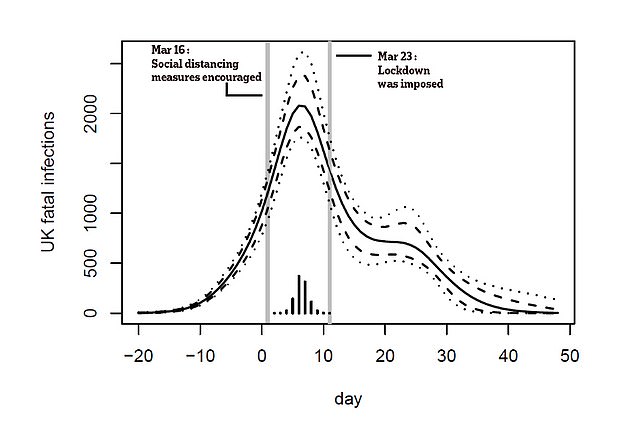 Separate modelling by Bristol University’s Professor Simon Wood  shows the spread of the virus had already peaked several days before the draconian curbs were imposed and was falling. The grey line marks March 23, when the UK locked down.  The darkest days in the UK’s outbreak were on April 8 and 9, when more than 2,000 people passed away from the virus. Professor Simon Wood believes most of these patients were infected between March 18 and 19 – 23 days earlier – and five days before the country locked down

‘Of course, this only applies to society as a whole and particular measures would need to be put in place to protect more vulnerable groups.’

Dr Glass estimates that the UK’s current easing of lockdown equates to under 10 per cent. He believes loosening them more than 15 per cent would cause cases to creep up.

He told MailOnline: ‘My approach does not attempt to model specific relaxation scenarios, but to look at the overall picture.

‘Based on the data, there is no indication the relaxations introduced so far have led to an increase in numbers in the UK as a whole.

‘But for the most recent relaxations we wouldn’t expect to see any effect in the data for a couple of weeks, so we need to keep monitoring the situation.

‘In summary, I don’t think we need to reintroduce more restrictions, but I think the scope for further relaxations is very limited at the moment.’

Reacting to the study, Ian Jones, a virologist at the University of Reading, said: ‘My own view is that if there is a second wave it will be a blip not a major outbreak.

‘I know what the maths says but I think the situation now is very different to three months ago and I don’t think all of these effects are accurately incorporated into the models.’

Professor Jones said there were five main reasons a second outbreak would not be nearly as lethal as the first.

He added: ‘People are now far more aware of the virus and take precautions that they otherwise would not, the hand washing and distancing. Even if not perfect it has a percentage effect on transmission.

‘Its warmer and dryer and it is generally accepted that transmission will be less in these conditions, another percentage effect.

‘At least some of the population, up to 15 per cent in some areas although much less in others, is now immune and cannot catch or transmit the virus. We do not have herd immunity but we have some when previously we did not, yet another percentage effect.

‘Other outbreaks like the 2009 flu pandemic spiked in June but then almost disappeared before returning in the winter. There were plenty of susceptible people around but still the virus faded away in the summer.

‘Countries who have exited lockdown but also still have a large  percentage of the population susceptible have not seen a large rise in cases. I cannot see why the UK will be any different.’

Strictly pro Oti Mabuse cosies up to the camera as she shows off her...

Sean Murray wife: Who is NCIS McGee star married to?