DR Anthony Fauci said on Thursday that the US doesn’t need more coronavirus lockdowns in order to get the outbreak under control.

Fauci, the director of the National Institute of Allergy and Infectious Diseases, told AFP the country — which has seen a surge of cases in recent weeks — doesn’t need a repeat of the strict stay-at-home orders enacted earlier this year.

“I don’t think we’re going to be talking about going back to lockdown,” he said.

“I think we’re going to be talking about trying to better control those areas of the country that seem to be having a surge of cases.”

As of Thursday, the US reported more than 2.26million coronavirus cases.

While states like New York and New Jersey — which saw tens of thousands of virus-related deaths — now have their outbreaks largely under control, other states, like Florida, Texas, and Arizona, have seen a spike in cases.

Beach-goers are seen here in Texas on May 23[/caption]

Fauci told AFP that based on where the virus is affecting people, local officials would need to make decisions about reopening based on their case numbers.

“Counties where there are certainly no cases at all, there’s no problem with the schools opening.”

“There are other parts where there’s a modest amount of infection (where) you may delay school openings.

Fauci continued: “And there are other parts of the country where there’s minimum infection, where you want to make some modification of the process, namely: alternate days, morning versus afternoon, seating people apart from each other wearing masks.” 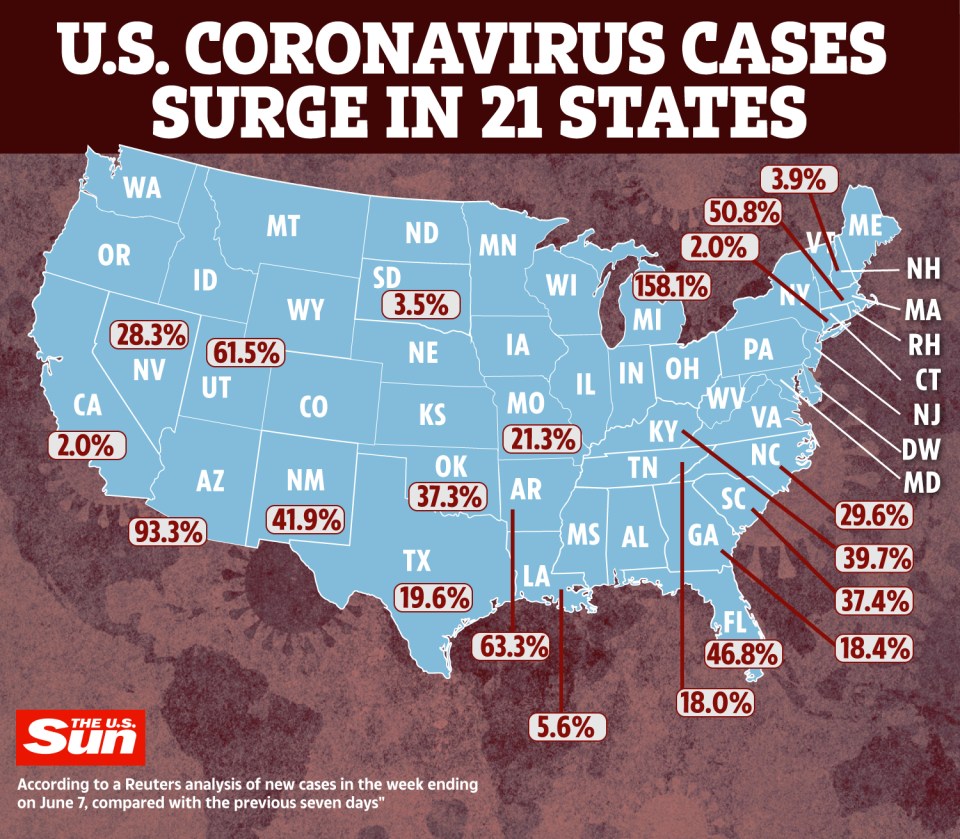 Fauci noted that it bothers him that people aren’t wearing masks, which public health officials have said is effective in helping stop the spread of the virus.

“And then… you see pictures of people in bars and in congregations without that. So again, it’s a mixed bag. Some people are doing it fine, and some are not.”

Earlier this week, Fauci told The Wall Street Journal of fears of another coronavirus wave in the US: “People are talking about a second wave. We’re still in the first wave.”

At the encouragement of President Donald Trump, state governors have reopened their local economies in phases to boost business hit hard by the virus.

As people have been allowed to go outside, hang out at bars and in other tight areas — and have protested in large gatherings in recent weeks — the number of infections has been spiking in at least 21 states across the country.

According to a recent study, if state governors hadn’t enforced coronavirus lockdowns when they did from January to April of this year, the outbreak could have been much worse.

At least 60million cases in the US were prevented by the shutdowns and tough restrictions from health and local officials, a team at the University of California, Berkeley found.

Hiring in China is still tepid, but more and more new jobs are going...

The Boys season 3 release date: Will there be another series?

How virus-proof is your mask? Under laboratory conditions, a professor answers the burning question