DAVID DE GEA is officially the most error-prone goalkeeper in the Premier League.

His howler on Friday night to allow Steven Bergwijn’s simple strike in was his seventh clanger leading to a goal in the Premier League since the beginning of last season. 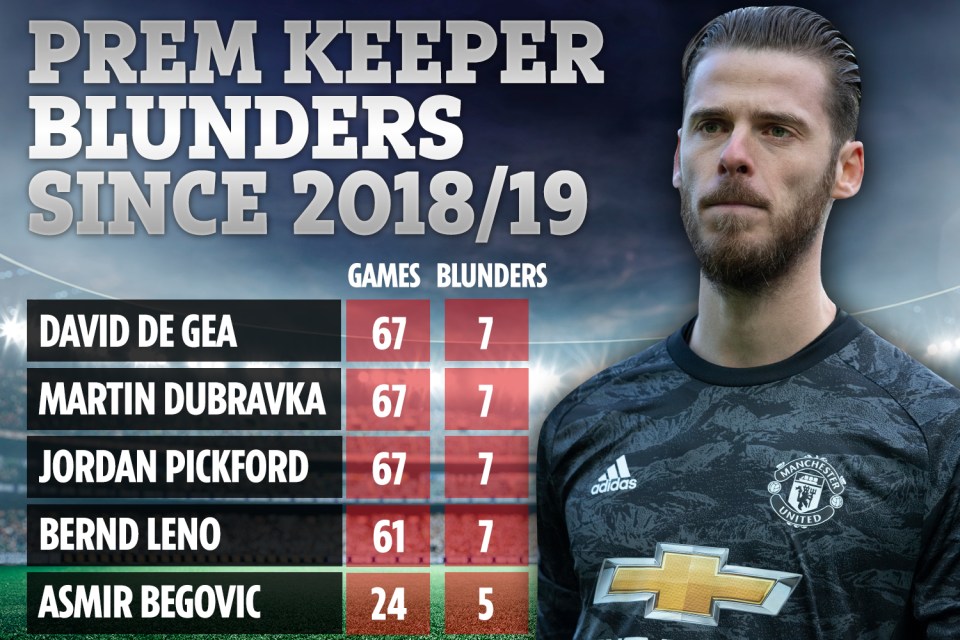 No other stopper currently plying their trade in England’s top flight has made more mistakes leading to their side conceding than the Manchester United No1.

Martin Dubravka and Jordan Pickford both have identical records of seven errors in 67 games, while Bernd Leno has the same number in 61 appearances.

And the latest of those – following some suspect defending from Harry Maguire – drew plenty of criticism from fans and pundits alike.

Ex-United captain Roy Keane laid into the Spaniard with a brutal assessment on Sky Sports.

He fumed: “It’s a massive defensive error – three people involved and De Gea can do much better.

“I’m shocked by that goal. I’ve watched a lot of football and to give away that goal I’m fuming.

“I’m staggered at Maguire and I’m sick to death of this goalkeeper.

“I would be fighting him at half-time, I would be swinging punches at that guy. I am flabbergasted.

“Maguire and De Gea, I wouldn’t even let them on the bus after the match. Get a taxi back to Manchester.

“These are established international players. Do your job. We’re not on about winning league, just getting into the top four! Shocking. I am disgusted.

“Maguire and De Gea should hang their heads in shame. De Gea is the most overrated goalkeeper I’ve seen in a long, long time.”

And it is not the only high-profile De Gea, 29, has made this season, despite signing a fresh £375,000-a-week, four-year contract earlier in the campaign.

Against Watford back in December, the Spaniard somehow managed to drop the ball in.

And then in March he was back to his calamitous antics as he dawdled on a back-pass for far too long and once he eventually got his clearance away, Everton’s Dominic Calvert-Lewin had pressed and the ball ricocheted off the English striker into the back of the net.

Manchester United may well already have the long-term replacement for De Gea at the club already.

Dean Henderson has earned plenty of plaudits during his two seasons on loan at Sheffield United, helping them to promotion back into the Premier League and now pushing for a European place.

And he bossing the current United No1 across almost every significant stat this season.

"I am disgusted with it. Maguire? de Gea? Hang your heads in shame."

"I'd be swinging punches at that guy."

Roy Keane is absolutely FURIOUS at that Tottenham goal…


Hornets host Foxes with both sides desperate for winning return

The England Under-21 international has conceded fewer goals at a better minutes-per-goal ratio, kept more clean sheets and boasts a better save percentage.

He has made fewer errors leading to goals with just one – his shocker against Liverpool – compared to the four from De Gea.

Henderson revealed earlier this year that his dream is to play “500 times” for United after joining the academy aged 14 while reports suggest he will only return to his parent club to be No1.

Body found in hunt for pregnant woman Kassanndra Cantrell, 33, who vanished before her ultrasound as ex is arrested

Millions of Windows PC users are still vulnerable to cyberattacks, and this is why

Will Smith and Kevin Hart are backing this 27-year-old's pandemic-proof start-up...

Body found in hunt for pregnant woman Kassanndra Cantrell, 33, who...