One mum said she was left rushing for the remote control tweeting: “My 9 year old just asked me if the F word was just spoken????”

Host Dan tweeted afterwards: “Really sorry about the swearing you might have heard on #FootballFocus today. I know a lot of kids watch the show and we are trying to work out what happened. Apologies.”

But, he later added that an investigation had proved that the reality star in fact didn’t swear, blaming the fact it sounded like he did on a “dodgy Zoom line”.

Josh replied: “Thanks Dan, VAR came in useful there.” 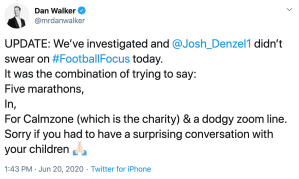 Most read in TV & Showbiz

'HE GOT AWAY WITH IT'

END OF AN ERA

However, Piers Morgan was having none of it, not wasting the chance to stick the boot into his BBC Breakfast rival.

Stop digging that hole, Inspector Walker – we all heard what he said.”

Another fan asked: “Anyone else hear the F word in the Zaha interview just now on football focus??”

One other tweeted: “Swearing on an episode of Football Focus might be the most disconcerting thing I’ve ever heard. Shaken to the core.”

Jeweller who ‘lost’ £13,000 at lap-dancing club will not get his money back