The reproduction rate of the coronavirus could be as high as 1.1 in the South West of England, officials warned today meaning the virus is on the brink of surging out of control in the rural region.

Officials at the Government Office of Science, which is headed by Sir Patrick Vallance, confirmed that the R rate in the South West is now somewhere between 0.8 and 1.1, which is a higher estimate than any other part of the UK. The R rate for Britain as a whole, however, has not changed in the past week and remains between 0.7 and 0.9.

The South West is the only region which could have a value higher than one, the dreaded point at which each infected patient starts to infect more than one other person and an outbreak starts to grow again. Last week the region’s estimate was 0.8-1.0, showing it has risen in the past seven days.

East of England currently has the lowest estimate, with its 0.7-0.9 making it the only region where the figure is definitely below 1.

The worrying news came as Britain’s coronavirus death toll rose by 202 today in the lowest Friday jump in 12 weeks, taking the UK’s total victims to 41,481. But a three to four week lag between people getting infected and dying of the disease, if they die, means that a surge in infections now could increase the death rate in July.

More than 292,000 people in Britain have now tested positive for the virus, after a further 1,541 patients were diagnosed in the last 24 hours.

Today’s death figure marks the smallest Friday rise since March 20, three days before the country went into lockdown, when there were just 36 coronavirus fatalities.

Transport Secretary, Grant Shapps, used today’s Downing Street briefing to remind people that it will, from Monday, be mandatory to wear face coverings on public transport and urge people not to attend protests planned this weekend because they risk spreading the virus.

He also said the Government is now launching a ‘jet zero’ initiative to investigate ways of starting carbon-neutral (net zero) flights so that when air travel returns it can be safer for the environment.

Mr Shapps and the NHS’s medical director, Professor Stephen Powis, batted away concerns about the R rate in the South West and said what was important is the centre-point of the range (0.95 for the region) is the most important, and remains below 1.

In other coronavirus developments today: 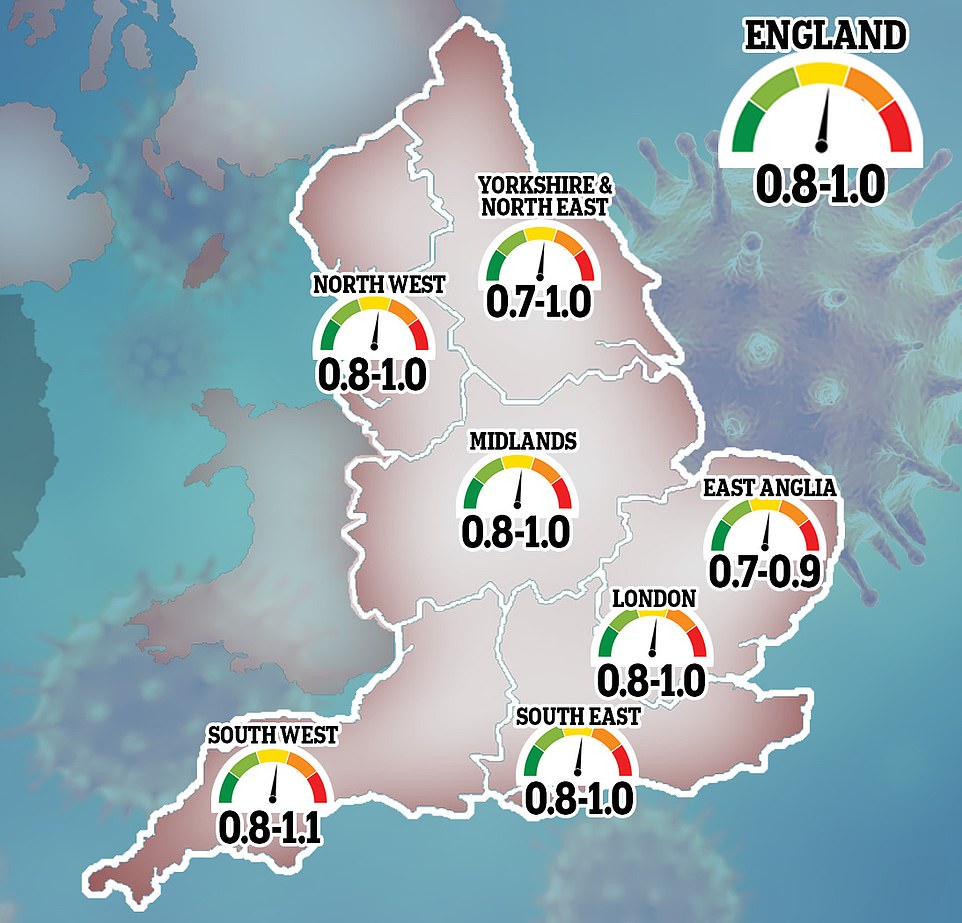 Officials warned today that the virus’s reproduction rate has risen to higher than 1 in the South West of England, to 1.1, while it remains somewhere between 0.8 and 1 almost everywhere else across the country. This means the outbreak could be increasing in size in the South West 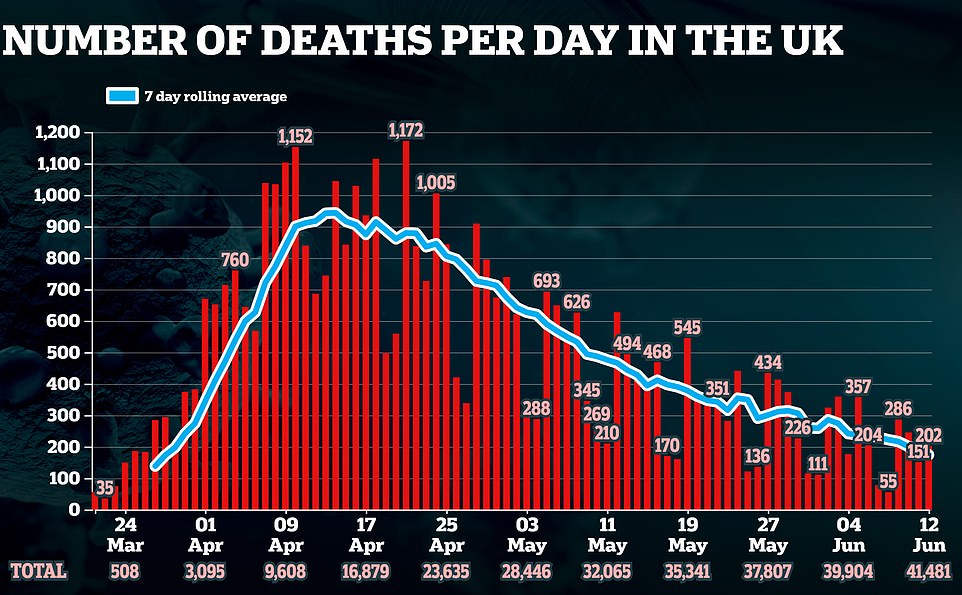 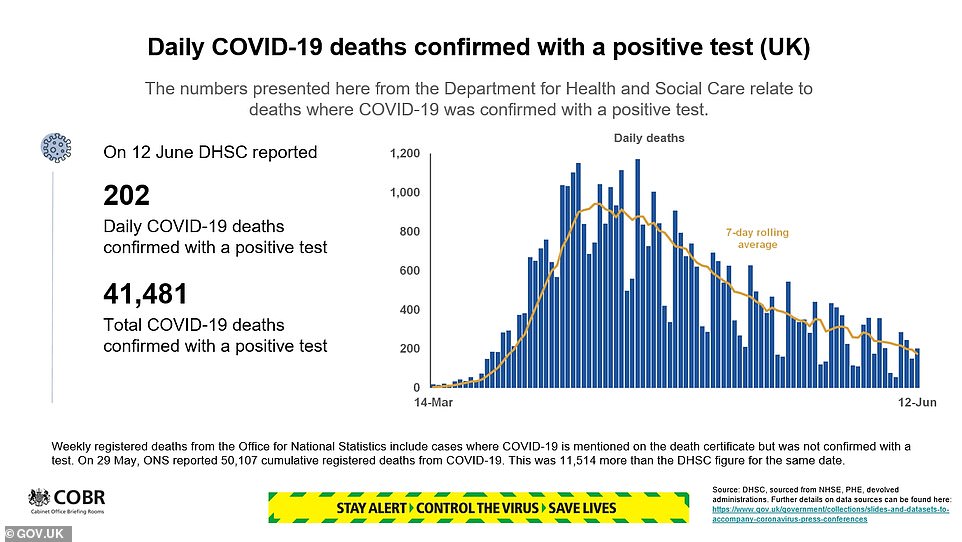 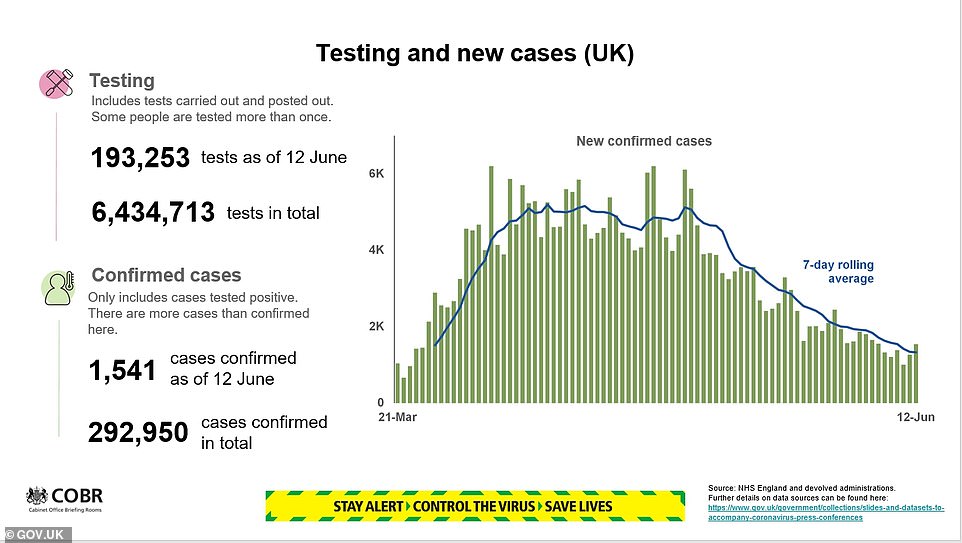 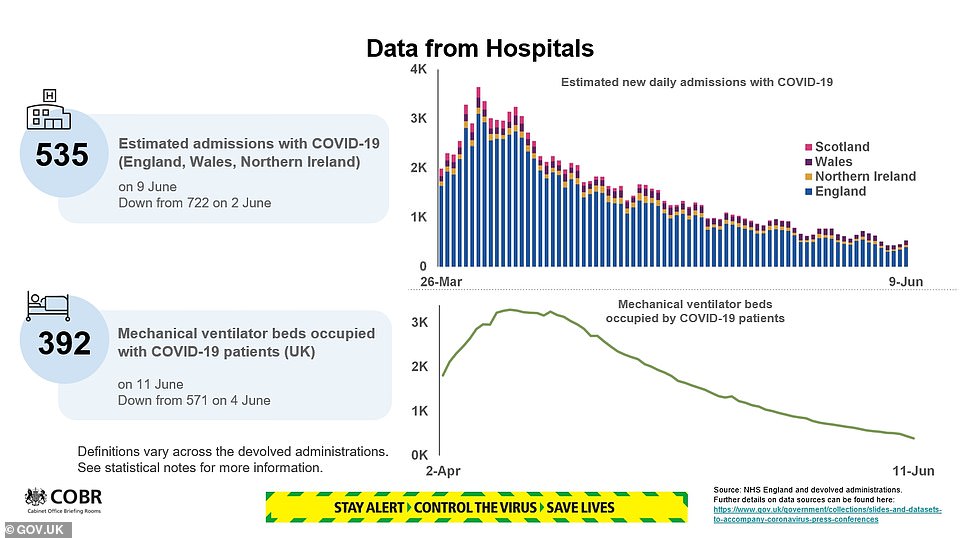 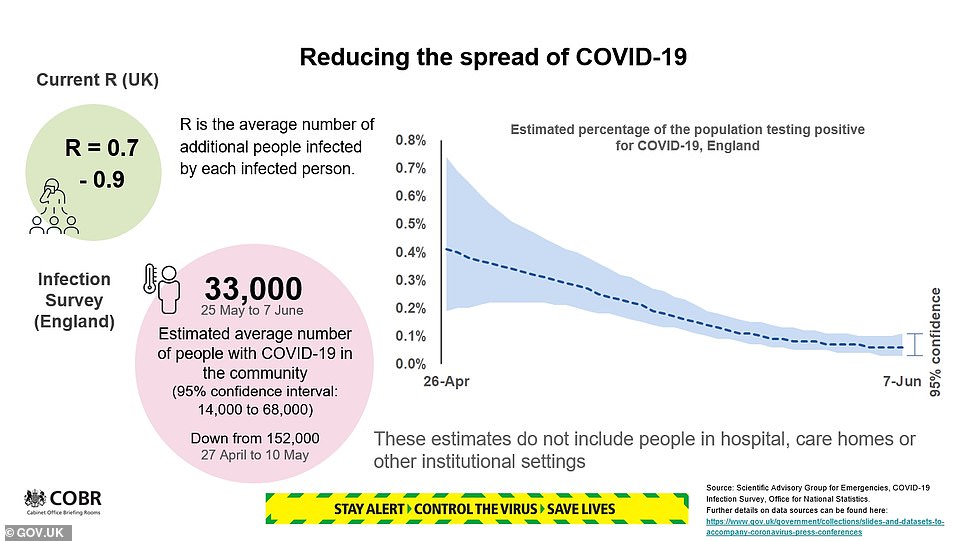 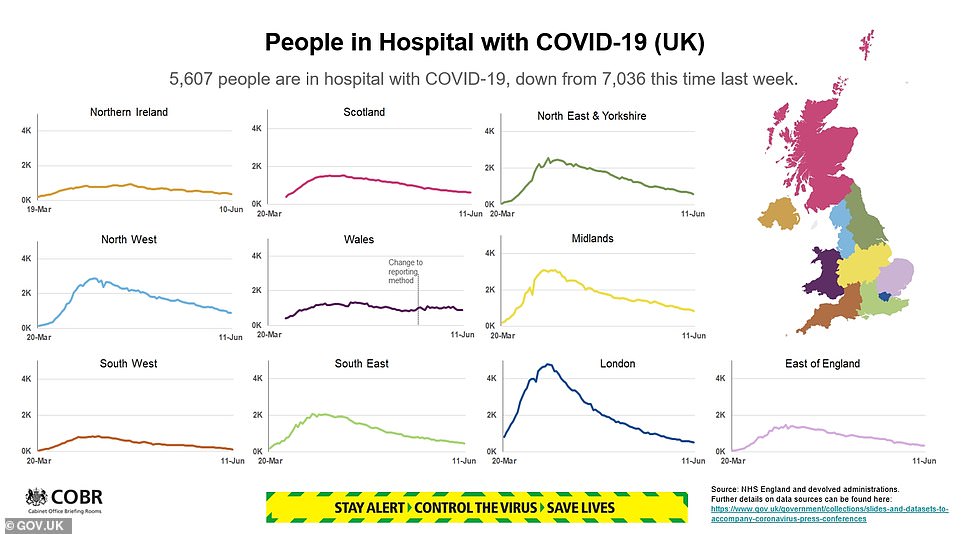 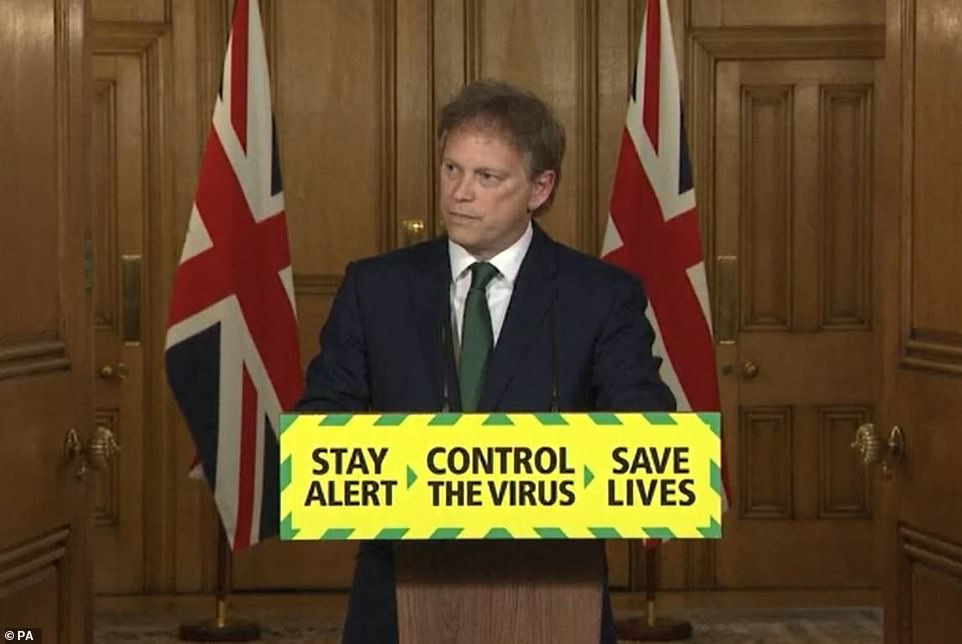 Transport Secretary, Grant Shapps, used today’s Downing Street briefing to remind people that it will, from Monday, be mandatory to wear face coverings on public transport

The Government Office for Science report estimated that the R in London – formerly the UK’s coronavirus epicentre, is between 0.8 and 1 along with, the Midlands, the North West and the South East.

They say that predicting the R with any real accuracy will become increasingly difficult as the crisis continues to peter out in the UK.

WHAT IS THE R NUMBER? AND HOW IS IT CALCULATED?

Every infectious disease is given a reproduction number, which is known as R0 – pronounced ‘R nought’.

It is a value that represents how many people one sick person will, on average, infect.

The R0 value for SARS-CoV-2, the virus that causes COVID-19, was estimated by the Imperial College COVID-19 Response Team to be 2.4 in the UK before lockdown started.

But some experts analysing outbreaks across the world have estimated it could be closer to the 6.6 mark.

Estimates of the R0 vary because the true size of the pandemic remains a mystery, and how fast the virus spreads depends on the environment.

HOW DOES IT COMPARE TO OTHER VIRUSES?

It is thought to be at least three times more contagious than the coronavirus that causes MERS (0.3 – 0.8).

Measles is one of the most contagious infectious diseases, and has an R0 value of 12 to 18 if left uncontrolled. Widespread vaccination keeps it suppressed in most developed countries.

Chickenpox’s R0 is estimated to be between 10 and 12, while seasonal flu has a value of around 1.5.

WHY IS IT IMPORTANT TO HAVE A LOW R0?

The higher the R0 value, the harder it is for health officials control the spread of the disease.

A number lower than one means the outbreak will run out of steam and be forced to an end. This is because the infectious disease will quickly run out of new victims to strike.

HOW IS IT CALCULATED?

Experts use multiple sources to get this information, including NHS hospital admissions, death figures and behavioural contact surveys which ask people how much contact they are having with others.

Using mathematical modelling, scientists are then able to calculate the virus’ spread.

But a lag in the time it takes for coronavirus patients to fall unwell and die mean R predictions are always roughly three weeks behind.

The fewer infected patients there are, the greater the margin for error, especially when looking at specific regions of the UK.

For example, if there are only 10 cases and one of them infects three people, it would push the R rate up significantly and skew the average.

From next week the Government will publish the growth rates for regions based on raw infection data.

The R rate has been crucial in guiding the Government’s gradual relaxation of lockdown measures.

The R was believed to have been between three and four at the height of the crisis and getting it below one was paramount to loosening restrictions at all.

Reacting to the development, Matt Keeling, professor of populations and disease at the University of Warwick, said: ‘All the ranges are similar and overlapping, so we cannot say that any one region is worse than any other region.

‘All the ranges are closer to the critical threshold of R=1 than we would ideally like to see – which means that the epidemic is declining relatively slowly.

‘This also means we haven’t got much wiggle room for additional relaxation of social distancing measures.

‘As the number of cases becomes smaller in many regions, these predictions will become more uncertain and more biased by small localised outbreaks.

‘There is still some uncertainty in these values, which are influenced by the three interacting outbreaks in hospitals, in care homes and in the community.’

Health Secretary Matt Hancock admitted last week that localised lockdowns could be introduced if some parts of the country continued to be hit harder than others.

‘You’re right that the R is closer to one in the South West and in the North West, the advice from SAGE is that R is below one in all regions,’ he said.

‘However, we want to increasingly have an approach in tackling local lockdowns where we spot a flare-up.’

Meanwhile, the Office for National Statistics said today it thinks just 33,000 Britons currently have Covid-19, in a massive boost for the UK’s fight against the disease.

The data, based on testing of almost 20,000 people in the community, shows the number of people with the virus outside of hospitals and care homes is tumbling.

The ONS’ 33,000 prediction does not include hospital and care homes, where there are still more than a thousand new cases every day, but the virus is fading among members of the public.

When the same estimates were published on May 28, just a fortnight ago, they suggested 133,000 people were carrying the virus, many without knowing it.

But England’s outbreak is continuing on a ‘clear downward trend’, statisticians say, with around 31,600 new infections each week – around 4,500 per day.

This shows that, as the R value remains below one – the latest estimate is between 0.7 and 0.9 – fewer and fewer people are contracting the deadly virus.

The ONS data says just 0.06 per cent of the population is infected, showing the infection rate is now around one positive case in every 1,790 people in the community.

And this week’s report, which relates to the period between May 25 and June 7, is recent enough to include the effects of the first easing of lockdown measures, when the rules on spending time outside were relaxed on May 13. This does not, according to the ONS data, appear to have led to rise in cases.

Statisticians wrote in their report this morning that a complex investigation of the data ‘confirms there is a clear downward trend’ but warned about interpreting raw figures.

They added: ‘As the proportion of those testing positive in England is decreasing over time, it is likely that the incidence rate is also decreasing. 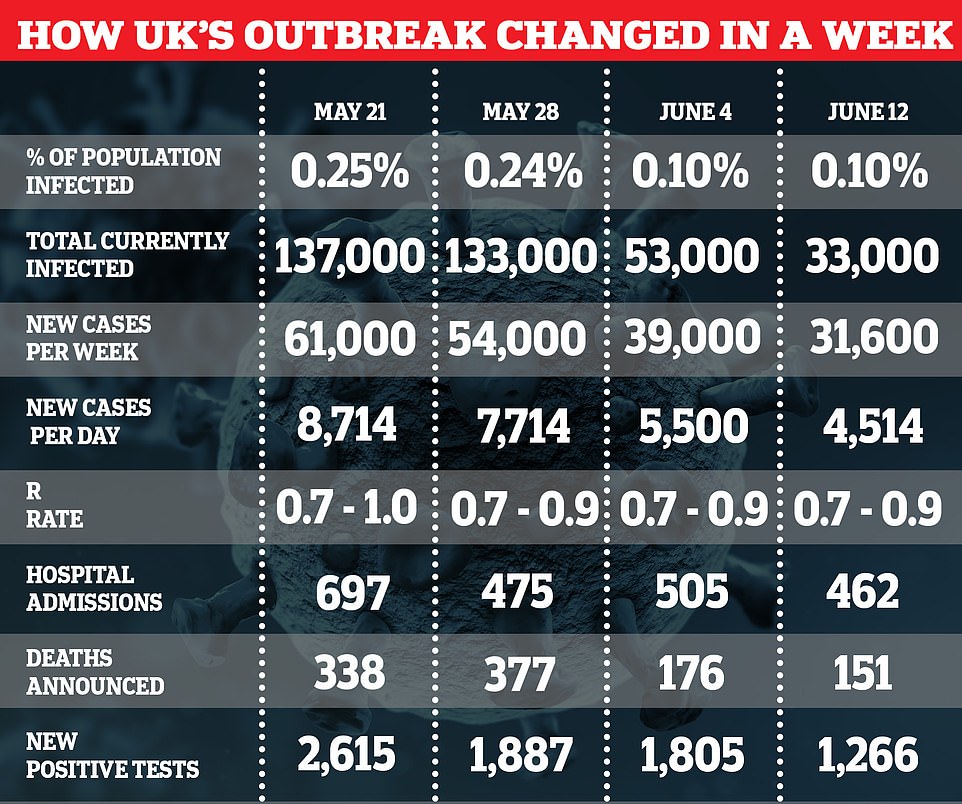 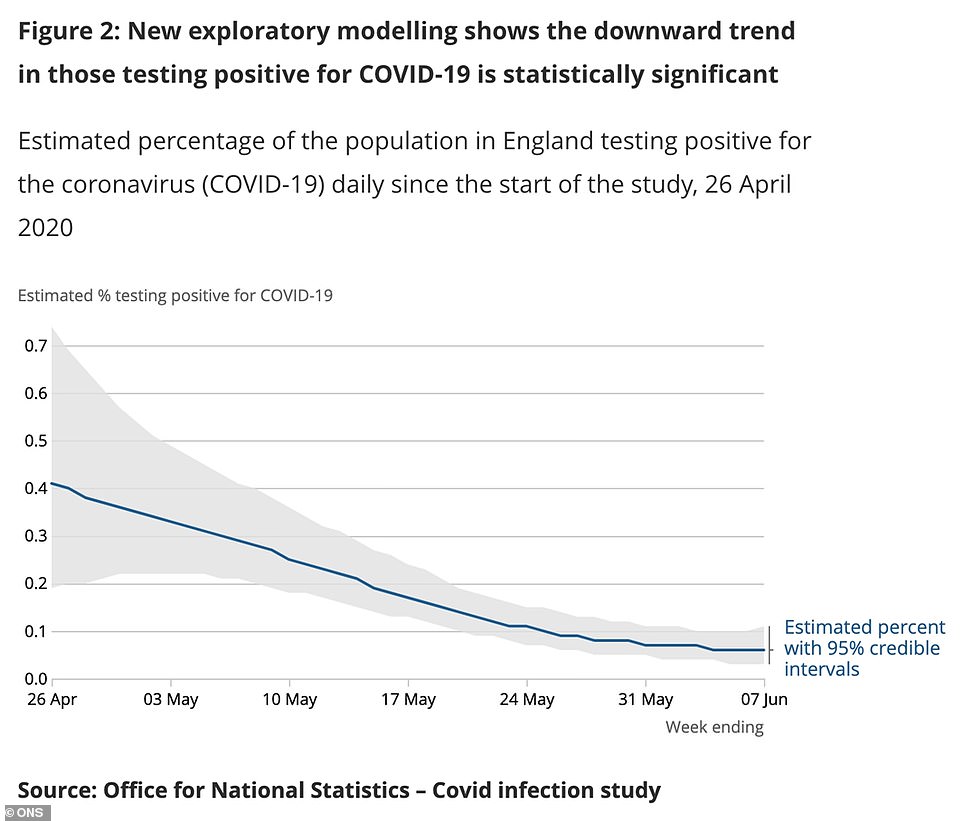 ‘However, because of the low number of new positive cases, we cannot currently measure a statistically significant reduction.’

ONS estimates were based on just 11 positive tests from a sample of 19,933 people tested across 9,179 households.

Although the small numbers mean one error in either direction could significantly change the estimate, it suggests a tiny proportion of the population has Covid-19.

The statistics announced today show a marked drop on those released in the two weeks since the data first became available.

When the information was first published on May 21, 0.25 per cent of the population was thought to be infected with the virus.

The estimated number of members of the public carrying the virus at any one time has tumbled over the same time period, from a predicted 137,000 in May to just 33,000 today. Today’s figure was accurate at June 7, but is the most recent data.

The Department of Health has today grasped the promising statistics and said: ‘Our plan is working.’

A spokesperson added: ‘Infections of this virus have now dropped to approximately 4,500 a day.

‘Thanks to the work of our health and care workers and the huge efforts of the British people to slow the rate of infection, rates of COVID-19 infections are decreasing over time.

‘ONS’s Infection Survey is a vital part of our testing strategy, and we will continue to learn from its insights to expand our understanding of the virus.’

UK weather forecast – Britain set for 29C heatwave but must endure week of...

Antiques Roadshow: Expert's huge valuation of trophy snubbed ‘Not mine to...

Madeleine McCann suspect Christian B’s bid to get out of prison...