Authorities in Berlin have placed 369 households under quarantine after dozens of people tested positive for coronavirus.

Officials in the southern district of Neukoelln said the outbreak involved homes in seven different locations and in some cases with 10 people living together.

Berlin’s top health official, Dilek Kalayci, urged those residing in the German capital to use a new government-backed contact tracing app, rolled out today, to help limit the spread of the virus. 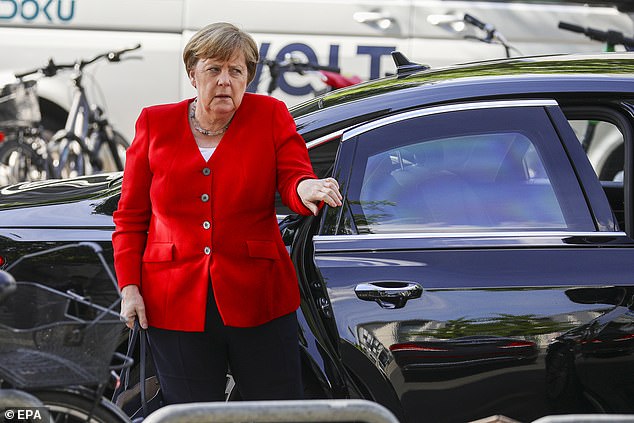 German Chancellor Angela Merkel was in Berlin today, where 369 households have been placed under quarantine

As of Monday, Berlin had recorded a cumulative total of 7,368 cases of Covid-19 and 208 deaths since the outbreak began.

Officials say the new tracing app is so secure that even government ministers can use it – although developers acknowledge it is not perfect yet.

Smartphone apps have been touted as a hi-tech tool in the effort to track down potential Covid-19 infections.

Experts say finding new cases quickly is key to clamping down on fresh clusters, especially as countries slowly emerge from lockdowns and try to avoid a second wave of infections and deaths.

But governments in Europe have run into legal and cultural hurdles trying to reconcile the need for effective tracing with the continent’s strict data privacy standards.

Germany, where a person’s right to their own data even after death is rooted in the constitution, has proved a particular challenge.

Early government suggestions to use mobile phone tower information and GPS co-ordinates for the app prompted a swift backlash.

‘Tracking where a person is in real time, that does remind us of China and its surveillance system,’ said Frederick Richter, who heads the independent Foundation for Data Protection.

It also recalls Germany’s own history of dictatorships. Both the Nazis and East Germany’s communist regime amassed vast amounts of information to persecute dissidents and undesirables.

‘That’s why we have always been very sensitive in Germany when it comes to the state collecting information on its citizens,’ Mr Richter said.

Like many other European tracing apps, Germany’s system now relies on low-energy Bluetooth technology that is standard in modern smartphones. 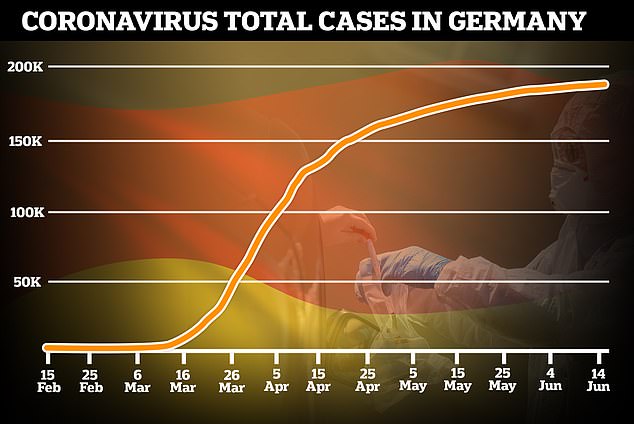 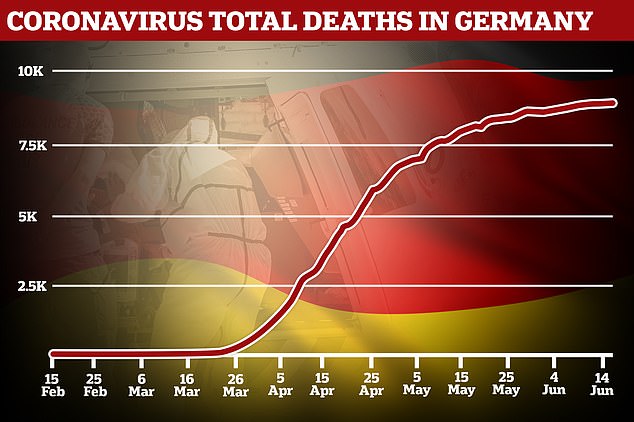 As of Monday, Berlin had recorded a cumulative total of 208 deaths, with 8,885 nationwide, as shown in a graph, pictured

The app scans the user’s surroundings and records which other smartphones with the app are nearby and for how long.

If someone using the Corona-Warn-App tests positive for Covid-19, they can inform others who were in close proximity for at least 15 minutes that they might be infected.

Developers say their most recent tests correctly identified 80 per cent of people’s contacts.

That still leaves 20 per cent who were either not recognised as having been close to an infected person or deemed exposed even though they were more than two meters away.

‘This app is no cure-all, it doesn’t give you a free ride,’ said health minister Jens Spahn, noting that face masks and manual tracing will still be required.

‘But it’s an important tool to contain the pandemic.’

He acknowledged there was likely to be an increase in people seeking to get tested because of the app. ‘I’d rather a test too many than a test too few,’ said Mr Spahn.

Concerns have also been raised about the hotline some users will need to call to get their positive test result recorded in the app.

This opens the door to trolls who could try to trick hotline staff, setting off a cascade of consequences for everyone they were close to in restaurants, supermarkets or public transport.

Opposition parties have called for a law to ensure private businesses do not try to push customers or employees into using the app, either through incentives or sanctions. 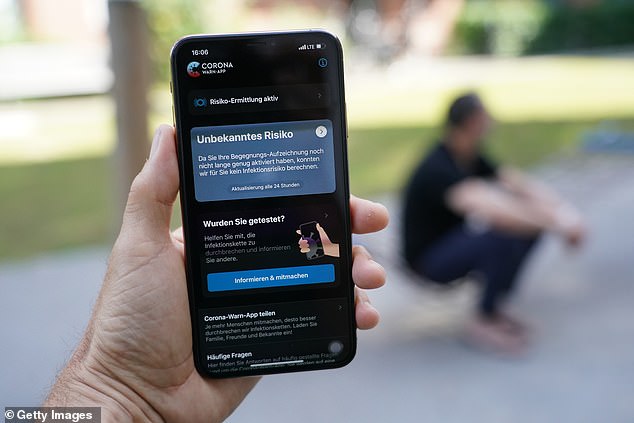 A phone showing the newly-released ‘Corona-Warn-App’ developed by the German government for tracking Covid-19 infections during the coronavirus pandemic, which was rolled out today

The German government insisted that ‘voluntary means voluntary’ and the app would be continually improved.

Asked whether the app meets security standards for top-tier officials, a spokesman for the Interior Ministry said the country’s IT security agency has been involved from the start.

‘I presume that from their side there can be an unreserved recommendation to members of the federal government to use this app,’ said the spokesman, Bjoern Gruenewaelder.

German President Frank-Walter Steinmeier and his wife Elke Buedenbender, a judge, announced they were using the app.

Sceptics are more likely to be reassured by Germany’s Chaos Computer Club, which bills itself as Europe’s largest hackers association. The group has a history of punching holes in government and corporate IT systems and of campaigning against surveillance technology.

Linus Neuman, a club spokesman, praised the German app developers’ transparency for using the coding site Github to let the public look over their shoulder and recommend improvements.

He also suggested that choosing to store data only on people’s phones, rather than on central servers the way France has done, would help minimise privacy risks.

‘We can’t guarantee that someone won’t find a weak spot in (the code) tomorrow,’ said Mr Neumann.

‘But we can say that these weak spots will have a lower overall risk than if the German government had pursued a centralised approach.’

The German government says its app cost 20 million euros (£18 million) to develop and will require 2.5 million to 3.5 million euros per month to operate. It is available in German and English, with Turkish and other languages to follow.

Mortgages: What would negative interest rates mean for mortgages?