Viewers have been speculating about Scott’s background ever since he arrived on the cobbles a couple of months ago.

He’s already told Carla that he and her dad Johnny have history, but was surprised to learn Johnny hadn’t mentioned him to her.

In fact Johnny made a sharp exit almost as soon as Scott arrived on the scene.

And after spotting the way he Scott looked at Carla this week when he came to her aid in the Rovers, they’re now convinced they are actually related.

Things could be even more complex as they think Carla’s blackmailer Chelsey could be her sister too.

Scott gave Chelsey a knowing look as he marched her and Jordan out of the pub and away from Carla.

Anybody else think this Scott character is Carla's dad and not Johnny? #Corrie 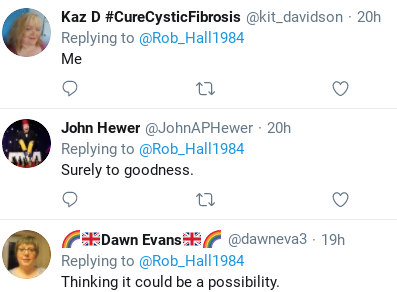 It prompted others to agree with one replying: “Surely to goodness.”

While another said: “Thinking it could be a possibility.”

And another typed: “”Scott seems to be keeping a close eye on Carla and Chelsey.”

Last week viewers learned of Carla’s troubled time away last year when she suffered a break down following the fatal factory fire.

Chelsey and Jordan turned up in the street looking for Carla, who they hunted after she lived with them in a squat – and stole all their drugs.

They were seen blackmailing her for money, with Jordan threatening to expose that she slept with him to Peter Barlow.

But Carla called their bluff, telling Peter everything that happened and that the pair had been harassing her.

Peter tried to convince Carla that if she had sex with Jordan it would have been rape, because she wasn’t in a fit state of mind.

However, she refused to agree after experiencing flashbacks.

After another run-in with scheming Jordan and Chelsey, Carla decided to tell everyone so that they couldn’t blackmail her.

Jordan and Chelsey were kicked out of the pub by Scott and Abi, and Peter was still seething from what he had learned.

At the end of the episode, Peter could be seen listening to the radio and heard a news report about a serious assault of a man and woman on a local estate.

But viewers were adamant it wasn’t Peter who attacked them.

most read in TV & Showbiz

'SUCH A GREAT DAD'

One fan said: “Clearly it’s wasn’t Peter who actually attacked Chelsy & Jordan as he has a solid alibi (AA meeting) but what about Scott? He did look seriously angry when Carla made her big speech after all?”

Another agreed: “I feel like Scott is behind it all, just has that look about him.”

A third added: “I think #Scott did it not #Peter.”

Could Scott be hiding a darker side?

Chelsea owner Roman Abramovich was the one who pushed for Kai Havertz transfer and...

Former army sergeant jailed for life after bludgeoning dad of two to death to...