BRITS are preparing to bask in 28C heat today before temperatures rise to 34C by Thursday prompting authorities to issue a health alert.

Temperatures are expected to continue climbing throughout the week with heatwave conditions developing in some areas across the UK.

Two Londoners enjoy a takeaway pint along the banks of the River Thames in Hammersmith, West London[/caption]

A couple enjoy the sunshine in Clapham Common on Monday[/caption]

Met Office Chief Meteorologist, Dan Suri said there will be “plenty of warm sunshine and temperatures reaching 28 or 29 Celsius in a few spots on Tuesday”.

Mr Suri added: “Temperatures will continue to climb through the week with a hot spell developing across much of England and Wales.

“From Wednesday temperatures will widely reach into the high 20s and it’ll be hot across much of the UK, especially central and southern England where we could see highs of 30 to 34 Celsius.”

Brits can enjoy lasting hot weather and balmy nights until at at least Friday.

“In addition to the warm days we are going to see some warm nights this week as temperatures overnight remain in the mid-high teens across England and Wales,” Mr Suri continued.

The sizzling conditions are due to air arriving from the Atlantic and warming up as it moves across the UK.

Together with clear skies and sunshine, temperatures are expected to rise.

Deputy Chief Meteorologist, Matthew Lehnert, said: “We’re also seeing an increased risk of thunderstorms towards the end of the week which is expected to bring an end to the very warm and sunny weather.” 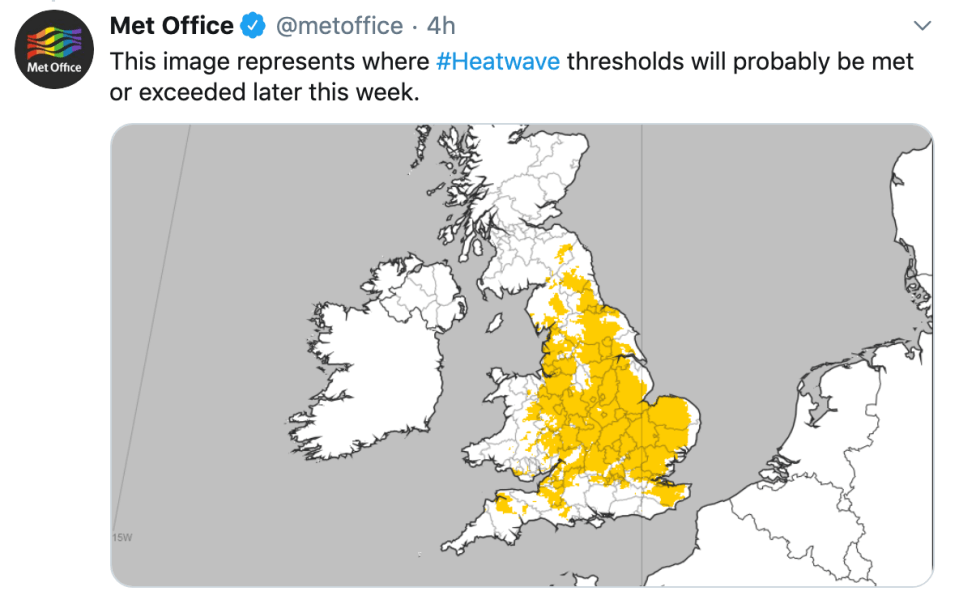 Cyclists bikes across the Thames in central London onMonday[/caption]

The Met Office issued the level-two warning which says there is a 80 per cent probability of heat-health criteria being met between 9am on Wednesday and 9pm on Friday.

The rare alert is triggered when the risk is 60 per cent or above for threshold temperatures being reached in one or more regions on at least two consecutive days and the intervening night.

“This is an important stage for social and healthcare services who will be working to ensure readiness and swift action to reduce harm from a potential heatwave,” the Met Office said.

It is working with Public Health England to help healthcare services prepare for periods of “extreme temperature”.

The UK will be hotter than the Bahamas and Ibiza this week – and forecasters have predicted we may even see the warmest June day in 44 years.

The mercury might climb over 34C, meaning it’s possible Brits will bask in record-breaking temperatures.

The hottest June day on record was in 1976, when temperatures reached a sweltering 35.6C.

But even if it’s not quite that hot this week, Thursday looks set to be the warmest day of the year so far.

A high of 28.9C was recorded on May 29 at Dawyck, Scottish Borders.

Londoners enjoying the sunshine at Potters Field in Southwark[/caption]

It’ll also be warmer in Britain this week than West End in the Bahamas, where it’s set to reach 29C, and Ibiza, where 28C temperatures are predicted.

It’ll be hotter still on Thursday, when both the Met Office and BBC weatherman Derek Brockway have predicted highs of around 34C.

“The last time we had temperatures similar to this in June was last year,” Ms Maxey said.


All pubs, cafes and restaurants to be allowed to serve drinks outdoors

Temperatures will be highest in England’s South, the South East, the Midlands and parts of the North.

Friends enjoying the sunshine in London while maintaining social distancing[/caption]

One man relaxes on a boat on Henley on Thames, Oxford[/caption]

The yuan won't unseat the dollar soon — but it could grow in prominence...

5 Affordable Laptops That Are Great for Working From Home