Elsewhere in the world, in countries that are some weeks ahead of us and where lockdown restrictions have been eased, there are as yet few signs of a dreaded ‘second wave’ – although it is early days.

Now some scientists are suggesting – tentatively to be sure – that this strain of the coronavirus may be following a path beaten by other pathogens, whereby the murderous intruder evolves into a house-guest that lives peaceably inside us. 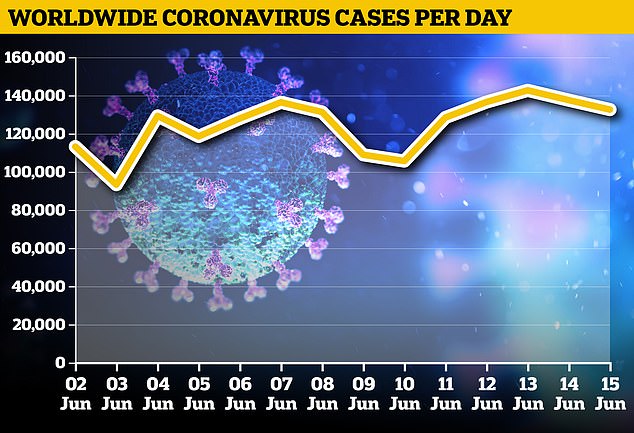 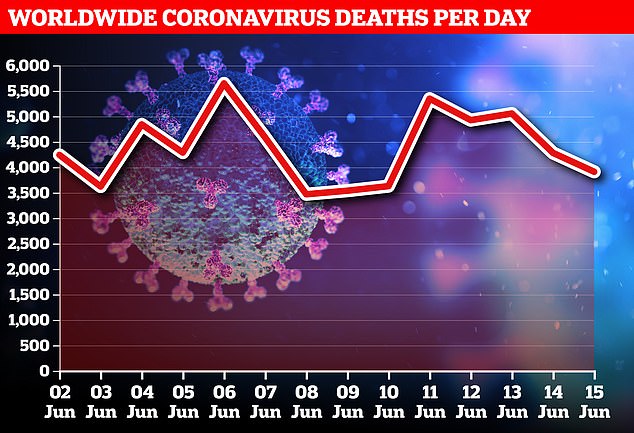 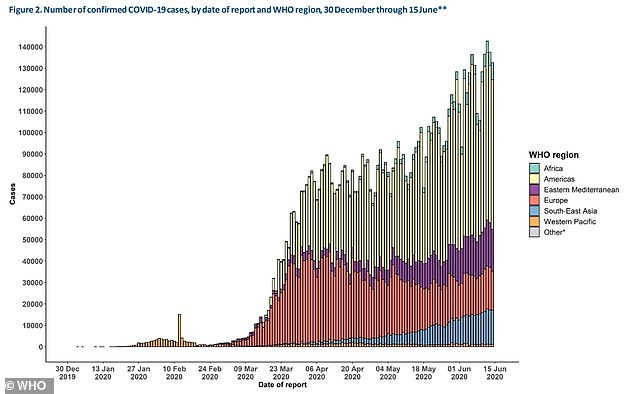 Data collected by the World Health Organization shows how the epicentre of the pandemic has changed since the virus first emerged in the Chinese city of Wuhan in December, with the Americas (yellow) recording the most daily cases 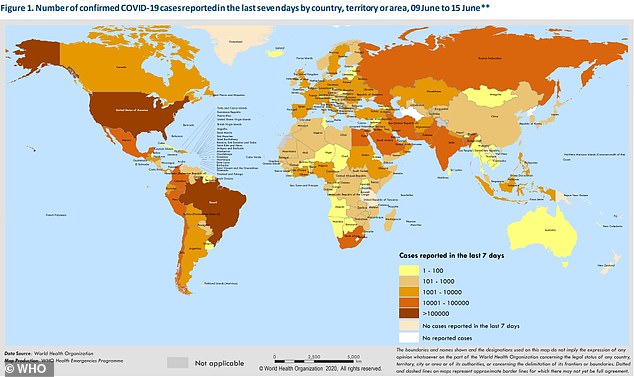 Figures also show how Brazil and the US are the two nations being hardest hit by the virus, and shows a couple of nations — including New Zealand — have gone days without a case 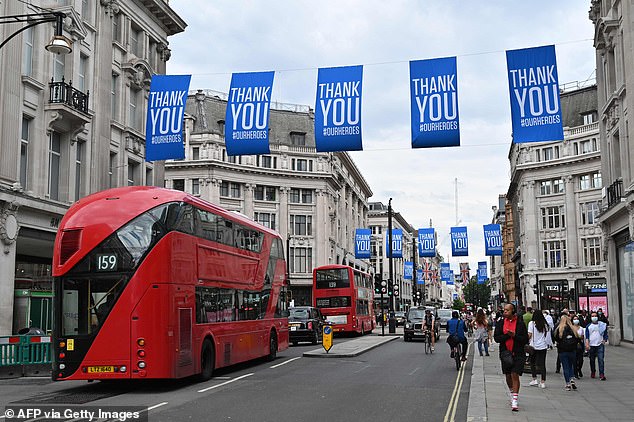 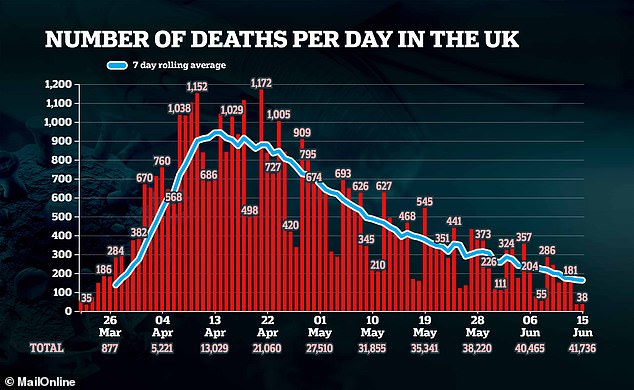 Daily deaths from coronavirus remain low in the UK, with just 38 recorded on Monday meaning the total sits at 41,736 overall

Early evidence for this positive development comes from northern Italy which suffered the full force of the pandemic weeks before it hit us.

Late last month, Professor Matteo Bassetti, the head of infectious diseases at San Martino hospital in Genoa, told journalists: ‘The strength the virus had two months ago is not the same strength it has today.

‘The majority died in the first days after admission. We no longer see these types of patients.

‘Is this because the virus lost some viral potency?’ he asked. ‘I don’t know.’ 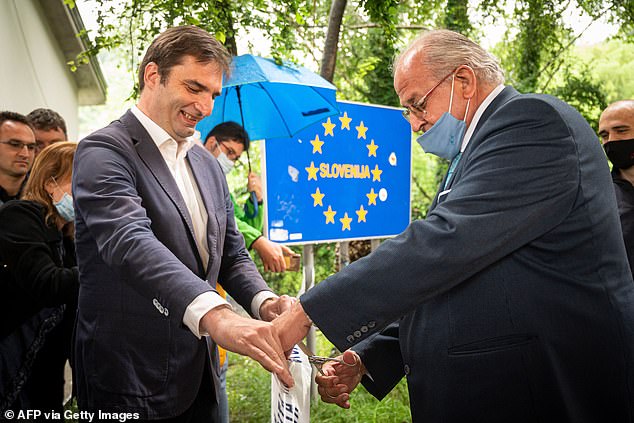 A positive sign in the European fight against coronavirus: Italian mayor of Gorizia (left) reopens the border with Slovenia in the north of Italy – one of the areas most devastated by the virus. It comes as Italian scientist say the virus is weakening

His observation is supported by an analysis of local death rates by Professor Lamberto Manzoli, an epidemiologist at northern Italy’s Ferrara University.

His results suggest that from March to April, mortality from Covid-19 across all ages fell by more than half.

Professor Manzoli’s paper has not yet been published in a reputable scientific journal and so has not been subject to peer review.

Scientists are still on a steep learning curve with this novel virus, but other observations feed into this theory.

In China, as far as we know, there have been localised spikes – including the current outbreak associated with a market in Beijing – but no widespread surge.

In France, Spain and Italy, where some semblance of normal life began two to three weeks ago, both new infections and deaths remain low. 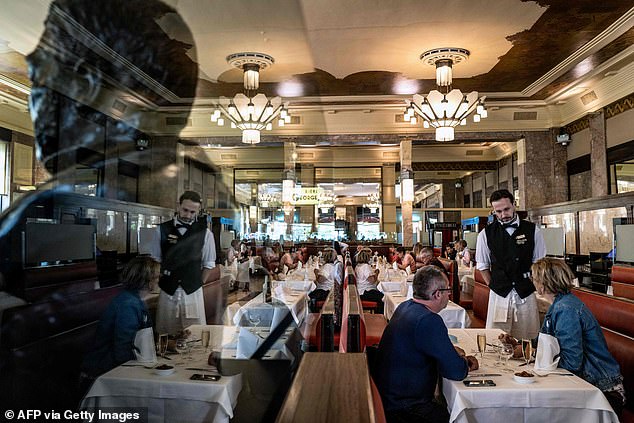 In European countries such as France (pictured), a sense of normal life has returned with the number of cases and deaths remaining low

A similar apparent fall in lethality has been reported in America. Lee Riley, a professor of infectious diseases at the University of California, Berkeley, told the science publication Elemental that data from New York hints at an improvement in recoveries.

‘Every time a virus passes from one person to another it goes through mutations,’ he says.

‘These can accumulate and the virulence of the virus can ultimately lessen. It’s in the nature of these viruses to get tired after a while.’

While the world must hope and pray that the virulence is waning, there are some caveats, including two other possible explanations for the drop in deaths.

The first is that treatment has vastly improved as doctors have acquired experience of managing Covid-19.

Alternatively, the virus might simply have infected and killed the most vulnerable first, with more resilient patients surviving.

UK experts are dubious, arguing that the genetics of the disease have not changed. Dr Oscar MacLean, a bioinformatician at Glasgow University’s Institute for Infection, Immunity, and Inflammation, argues: ‘We’ve seen no evidence of widespread [reduction in its lethality].’ 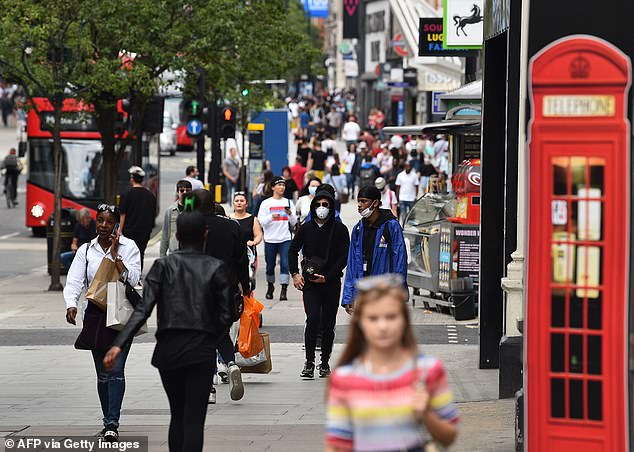 UK scientists remain sceptical, however, with regards to the debate surrounding the reduction in the virus’ lethality

He adds: ‘The golden rule is that viruses tend to evolve over time to become less pathogenic, but that doesn’t happen over a matter of a few months. It’s more a matter of years.’

Viruses can evolve to a point where they can indeed help their hosts (human or animal), establishing a symbiotic relationship from which both species benefit.

This may be the optimum state for the pathogen which has one purpose – to reproduce itself and infect new individuals and it can better achieve this if it does not kill its host (one reason why the Ebola virus outbreaks, with a 50 per cent fatality rate, tend to burn out).

Dr Frank Ryan, a British evolutionary biologist and author of Virolution, about the powerful role of viruses in evolution, calls the beneficial relationship ‘aggressive symbiosis’.

The herpes virus, for example, has developed symbiosis with the squirrel monkey, passing harmlessly from mother to baby.

If a rival species such as marmosets invades squirrel-monkey territory, the virus infects the challenger to devastating effect.

It is in the squirrel monkeys’ interest not to purge the virus, so its immune system views it as friend rather than intruder.

In fact, some ecologists have speculated on whether Covid-19 might be bats’ acquired defence against humans destroying their habitats and eating them.

Could we even ultimately develop a mutually beneficial relationship with coronavirus?

We know that nearly 10 per cent of the human genome comprises genetic material from viruses that invaded us in the past and this ‘borrowed’ viral DNA does vital work – ranging from enabling us to digest starchy foods to, ironically, helping us to fight infections.

Conversely, the Covid-19 virus might never bring anything useful to the human genetic table.

But three months on, even the slightest hint that it is in retreat – and for whatever reason – is something to hold on to.