Millions of Americans may have contracted the novel coronavirus at the outset of the pandemic, but the majority were never diagnosed, a new study suggests.

Researchers from Penn State University found that as many as 8.7 million people were infected with COVID-19, the disease caused by the virus, in the US in March.

However, more than three-quarters of them – 80 percent – were never confirmed to have the virus due to limited test availability and asymptomatic people who never sought medical care. 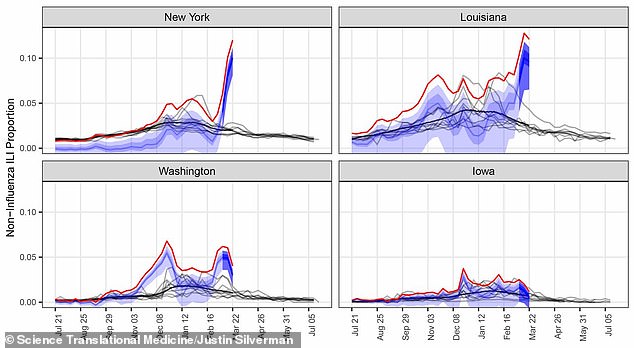 Researchers saw a surge of influenza-like illnesses across the US (above). In New York (top left), 10% of all influenza-like cases could not be attributed to the flu or other seasonal viruses 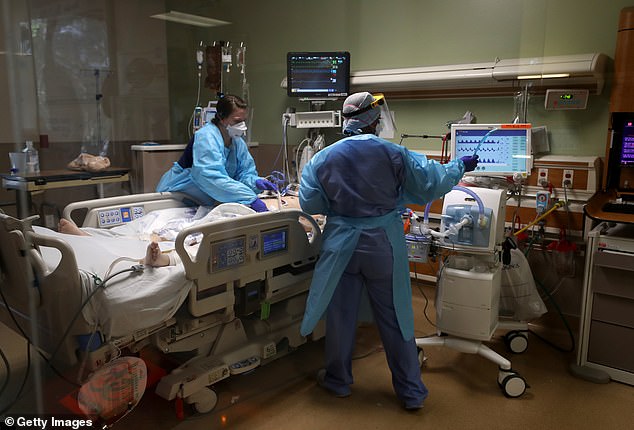 If just one-third of all non-flu cases across the US ere actually coronavirus, that would mean 8.7 million people were infected with the virus. Pictured: Nurses care for a coronavirus patient in the ICU at Regional Medical Center in San Jose, California, May 21

For the study, published in the journal Science Translational Medicine, the team looked at data of people who visited doctors’ offices or clinics with influenza-like illnesses (ILI).

These patients were never diagnosed with the seasonal flu, coronavirus or other typical winter viruses.

Researchers saw, in March 2020, a surge of cases with symptoms like the flu, such as fever and coughing, but that could not be attributed to the flu.

New York, for example, saw double the amount of non-influenza ILI during the fourth week of March 2020.

Additionally, more than 10 percent of all outpatient visits in the state could not be explained by either the flu or other seasonal respiratory viruses.

The team estimated that if just one-third of all patients in these states were infected with the virus, the ILI spike would mean there were about 8.7 million people across the US with coronavirus from March 8 to March 28.

But, at the end of the study period, there were only about 160,000 cases confirmed in America.

This means that, according the Penn State model, about 2.6 percent of the total US population was infected in March, not 0.04 percent.

Researchers say there are several reasons for why up to 80 percent of patients were never diagnosed. 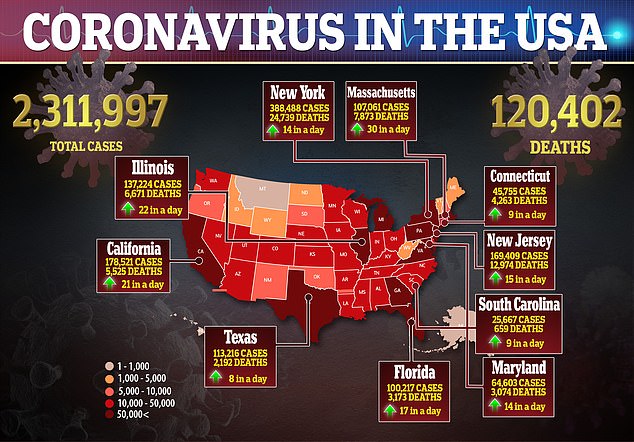 During this time, there was limited availability of tests and a high rate of false negatives from the kits that were available.

What’s more, many people either were asymptomatic or, if they did have symptoms,  they didn’t always seek medical care.

‘We found a clear, anomalous surge in influenza-like illness (ILI) outpatients during the COVID-19 epidemic that correlated with the progression of the epidemic in multiple states across the US,’ the authors wrote.

‘The surge of non-influenza ILI outpatients was much larger than the number of confirmed case in each state, providing evidence of large numbers of probable symptomatic COVID-19 cases that remained undetected.’

In the US, there are currently more than 2.3 million confirmed cases of the virus and more than 120,000 deaths. 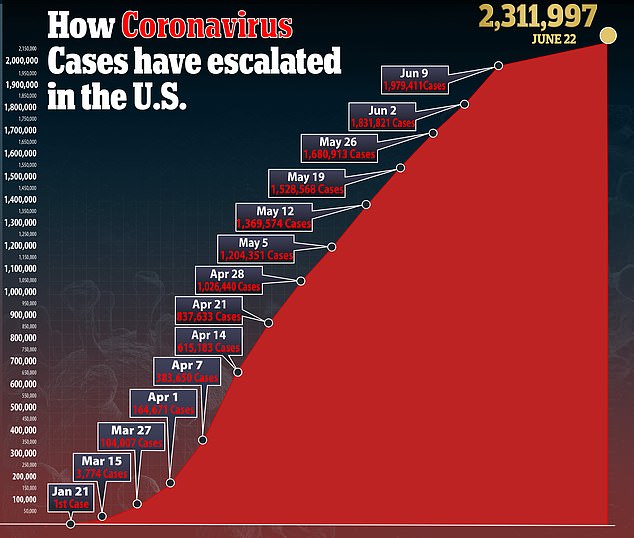 Hot weather: How to stay cool in a heatwave - five top tips as temperatures reach 30C

Teen Mom Jenelle Evans shows off her curves in bikinis through battles with baby daddies, costars and cops