Researchers found that one in six deaths ruled sudden cardiac arrests that happened outside of hospitals in San Francisco were actually caused by overdoses, typically of a cocktail of drugs, usually including opioids.

And because overdose death rates in San Francisco closely mirror rates nationwide, the research team from the University of California, San Francisco (UCSF) is concerned that overdoses across the US are similarly underestimated.

The opioid epidemic, a top public health priority, has nearly been subsumed by urgent efforts to address the coronavirus pandemic – but the new study is a sobering reminder that the American overdose crisis rages on, often unseen. 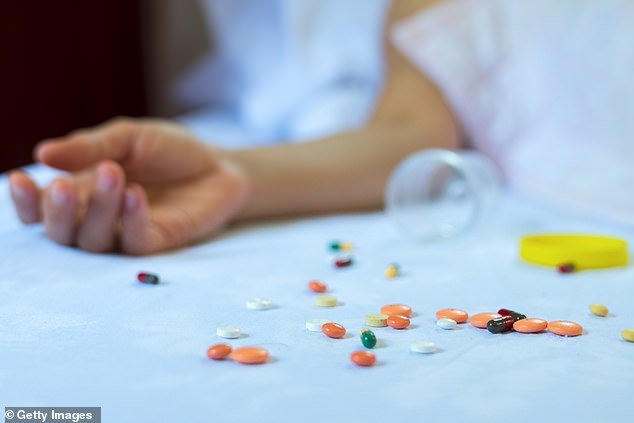 Researchers at UCSF reviewed cause of death records, autopsies and toxicology reports for all deaths that were recorded as sudden cardiac arrests that occurred outside hospitals over seven years.

None of those who died had overtly obvious signs that they would have died of drug overdoses, such as prior overdoses or drugs found with the body.

Cardiac arrest, which occurs when the heart simply stops beating, often because of a malfunction in the electrical system that give the heart its pulsing rhythm, can kill someone in minutes.

If someone dies suddenly outside a hospital, without signs they’ve been unable to breathe or suffered some other sudden ailment, it’s likely that they have died of sudden cardiac arrest, which is distinct from but may follow a heart attack.

More than 356,000 people suffer sudden cardiac arrests at home, at work, or otherwise outside of hospital settings each year.

In 2018 – the most recent full year for which the Centers for Disease Control and Prevention (CDC) has released data – 67,637 people’s deaths were attributed to drug overdoses.

But if the UCSF finding that one in six sudden cardiac arrest deaths were actually drug overdoses holds true nationwide, the annual drug death toll may be well over 100,000.

WHAT IS A CARDIAC ARREST?

A cardiac arrest occurs when the heart suddenly stops pumping blood around the body, which is usually due to a problem with electrical signals in the organ.

This causes the brain to be starved of oxygen, which results in sufferers not breathing and losing consciousness.

Cardiac arrests are different to heart attacks, with the latter occurring when blood supply to the heart muscle is cut off due to a clot in one of the coronary arteries.

Drug overdose and losing a large amount of blood can also be to blame.

Giving an electric shock through the chest wall via a defibrillator can start the heart again.

In the meantime, CPR can keep oxygen circulating around the body.

Most the toxicology reports revealed multiple drugs in the systems of those who had died of overdoses ‘masquerading’ as sudden cardiac deaths, the UCSF researchers found.

In many cases, those cocktails of drugs included opioids.

Worryingly, about half of the drugs involved in the overdose deaths were prescribed to those people by doctors.

Fentanyl is considered the driver of overdose deaths in recent years.

The potent opioids is too often used to cut heroin to make it cheaper and more addictive.

So someone using a dose that is standard to them is suddenly hit with a far stronger drug that can slow their breathing until it stops altogether.

But some 80 percent of people who misuse heroin first developed opioid addictions after being prescribed painkillers.

While powerful stimulants like cocaine can themselves cause the heart to beat too fast, leading to heart attacks or arrhythmias and then sudden cardiac arrest, opioids don’t directly cause cardiac arrest.

In an opioid overdose, a person’s breathing slows, then stops, depriving the brain, and then the heart of oxygen, finally causing cardiac arrest.

But ultimately it is difficult to distinguish whether a cardiac arrest happened on its own, or was the consequence of a drug overdose at the point that a paramedic arrives on the scene.

The distinction is critical, however, in two senses.

For one, mistaking drug overdoses for cardiac arrests may lead to an undercount of the former, and diminish the urgency with which the overdose epidemic is addressed.

And furthermore, while a defibrillator may save the life of someone in the midst of cardiac arrest, a person having a drug overdose can be saved with naloxone, the overdose-reversal drug.

Coronavirus symptoms update: Lacking in a vitamin could increase death risk by 99 percent

Should you open the windows in hot weather? Top tips on staying cool in...

Marcus Rashford excels on and off the pitch as he helps...

Gethin Jones announces new move away from The One Show ‘Bit...